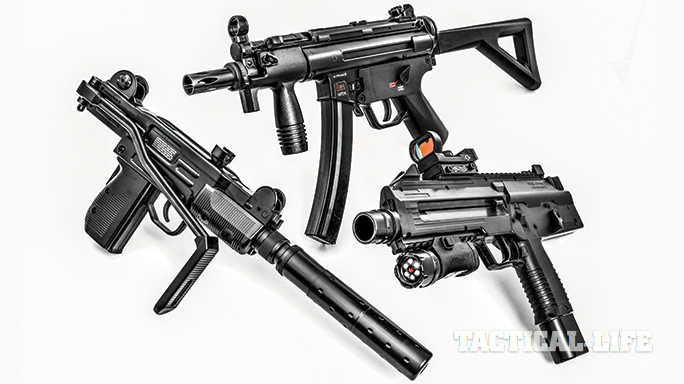 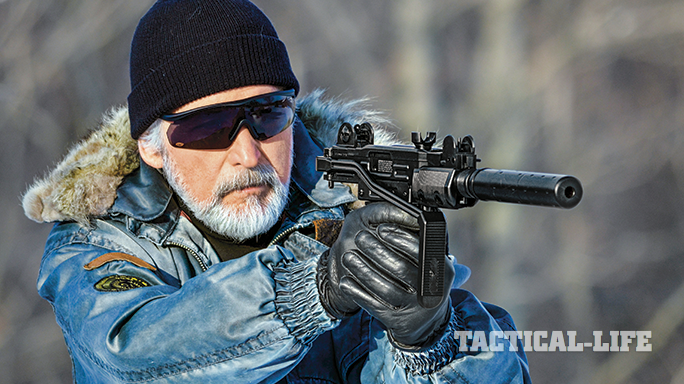 2 of 4
Spot-On Airspray: 3 of the Top .177 Machine Pistols
With the stock folded, the Umarex Mini Uzi air-gun replica handles just like a cartridge-firing Mini Uzi pistol. 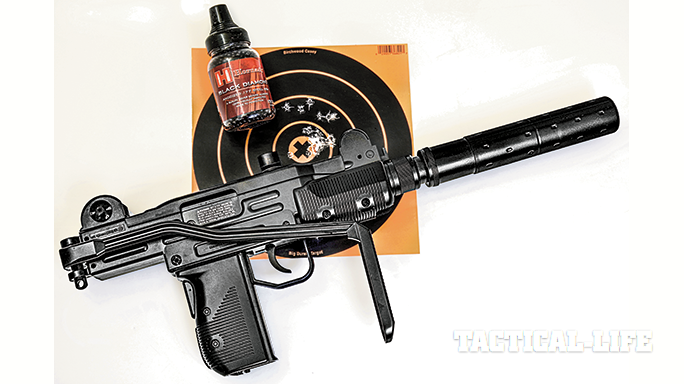 3 of 4
Spot-On Airspray: 3 of the Top .177 Machine Pistols
“The Umarex Mini Uzi is as close in measurements and fundamental operation as possible to an original 1980s version.” 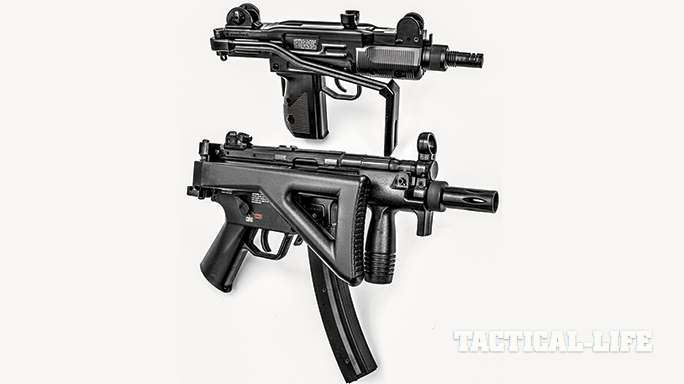 4 of 4
Spot-On Airspray: 3 of the Top .177 Machine Pistols
Umarex started with .22 LR versions of the famous Uzi Pistol and Carbine and Heckler & Koch MP5, and using similar all-metal construction, has introduced the Mini Uzi and MP5 K-PDW in the popular and affordable .177 caliber. Both BB pistols have folding stocks and operating features like the originals they are based on. 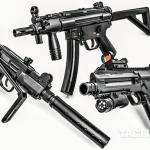 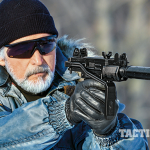 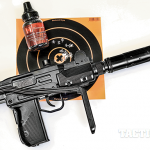 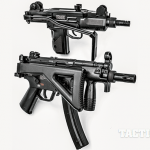 Over the past few years, the popularity of .22 LR copies of famous military handguns and rifles has grown exponentially as new models became available. Now there are more and more each year, thanks to the designers and manufacturers at Umarex and its licensed reproductions of legendary arms like the Uzi Pistol and Carbine, the HK MP5, the Colt AR-15 (and later variations), the HK416 and the Colt Government Model 1911. It comes as no surprise that Umarex is now offering those same models as .177-caliber air pistols.

We recently covered military classics with late 19th and early 20th century semi-autos and revolvers, but that was just the tip of the BB iceberg. The aforementioned .22 LR models (offer provided Umarex with platforms ready to adapt to .177-caliber BB guns, and at the head of my favorites list is the same model that ranked high on my .22 LR list three years ago: the Uzi Pistol. This is one of those rare firearms that have an unforgettable look, and since the originals have been around for over half a century (it was designed and patented in 1952 by Israel Defense Force Captain Uziel Gal), demand for the Uzi in any caliber or variation has not diminished. The additions of the Umarex .22 LR models (pistol and carbine) in 2012 and now a .177-caliber Mini Uzi make this a perfect first choice.

The Umarex Mini Uzi is as close in measurements and fundamental operation as possible to an original 1980s version. The correct style of charging handle is mounted on top of the receiver and reciprocates with each shot, and the ejection port on the right side of the receiver opens as if an empty shell case were being extracted. The Mini Uzi .177 has the authentic look and feel of the 9mm variant with a metal receiver, a rear sight with two flip-up apertures and authentic looking plastic grips and forend. Perfectly duplicating the original, a functioning two-position fire selector switch is at the top of the grips, and the grip safety needs to be depressed in order for the Mini Uzi to fire.

The magazine release at the bottom center of the grip is also a carbon copy of the cartridge-firing version. The big difference is that a CO2 capsule is loaded into the pistol grip, (which is designed to have the right panel removed by lifting it up at the base to reveal the channel for a CO2 capsule). After inserting a capsule, the puncture screw in the base is turned clockwise until seated. Replace the grip panel and you are ready to lock and load.

For external accuracy, the magazine has a full-width base where it extends from the grip, but inside it has a narrow stick magazine that holds 28 steel BBs. Extra magazines can be purchased for a quick reload. Among other special features on the Umarex Mini Uzi is a threaded faux suppressor for an even more authentic look; the gun can be fired with or without it. Last is a folding shoulder stock, one of those things you can’t have with a real Uzi pistol. (It is approved for the Uzi Carbine version in .22 LR, however).

The shoulder stock swings around into place and locks solidly under spring tension. To fold it away, simply apply downward pressure and rotate it around to the right side of the receiver. While lighter in weight than an original (40 ounces unloaded), the gun has a 5.6-inch barrel and an overall length (with faux suppressor and open shoulder stock) of 29.5 inches. The Mini Uzi is about as much fun as you can have in this caliber. The pistol looks and feels right, and more importantly, it shoots great. At a range of 7 yards (average distance for consistent accuracy with blowback-action BB pistols), the Mini Uzi put 20 steel BBs into an area measuring 0.75 inches.

There is one very good reason why I like the air-gun version of the Heckler & Koch MP5K-PDW (Personal Defense Weapon): Outside of military and law enforcement use, it is almost impossible to own this HK model. The original MP5 design dates back to the 1960’s select-fire model used by military and police. HK’s civilian semi-auto variation, the SP89, produced from 1990 to 1993, can cost upwards of $4,500 today. Budget-friendly .22 variants simply did not exist until the Umarex versions in 2009.

Building off the success of the .22 platform, Umarex delivers the ultimate MP5 with the .177-caliber PDW. This gun is so authentic looking it demands a second take. The MP5 magazine is exacting in detail and loads and releases like an original. Stock, sights, foregrip—you name it and this one has it, including a whopping 40-round capacity and a shot velocity of 400 feet per second (fps).

Accuracy at the test range placed 20 steel BBs into a 1.75-inch circle. The MP5K-PDW weighs in at a modest 57 ounces with its 6-inch barrel and an overall length (stock open) of 24.5 inches.

The option of semi-auto and full auto (or burst fire) has long been disallowed in the civilian firearms market (without special licensing and meeting ATF requirements). With BB guns exempt from NFA edicts, the same designs that require ATF Form 4, a local law enforcement signature, a background check and a $200 tax stamp are permissible. One can own a working .177-caliber select-fire pistol, usually for less than the $200 price of the tax stamp!

To produce the Steel Storm, Umarex has channeled the famous Uzi Pistol and Ingram MAC-10 to create a stylized select-fire model with some unique features of its own. The Steel Storm is aptly named, as it can produce a hail of BBs with the touch of a switch.

The Steel Storm takes many of the best aspects of the Ingram and Uzi and scales them up a little so you have a 300-round
BB reservoir with a built-in magazine. The gun is powered with not one but two 12-gram CO2 capsules to push .177-caliber BBs downrange at 430 fps. Add integral top and bottom rails for optics and laser sights, top it off with a six-shot-burst select-fire switch and you have a gun that is going to be nothing but fun to shoot. Best of all, it retails for just $129!

Umarex/Walther accessories are also perfect for the Steel Storm, particularly the Walther MRS (Multi-Reticle Sight) with four different holographic reticles, full windage and elevation adjustments and seven levels of illumination. This adds another $67 to the price of the gun.

Want to add lights and lasers? The Walther FLR 650 is designed just for air pistols and air rifles. The LED light and laser sight fits Weaver and Picatinny rails with a spring-tension mounting system that provides a bright, six-LED flashlight surrounding a red laser. A switch allows fast changes between laser and flashlight. This adds another $75, so for a total suggested retail price of about $270 you can have a fully outfitted, select-fire tactical air pistol.

Running a series of range tests with 30 rounds and sighting at 7 yards with the MRS red-dot sight, the Steel Storm fired
its charge into a circle measuring 1.75 inches and blew out one section of the bullseye. With the selector set to six-shot bursts, 30 rounds covered just over 2.1 inches. This is a truly fun pistol to shoot!

This article is from the August 2015 issue of COMBAT HANDGUNS. To subscribe, please visit PersonalDefenseWorld.com. 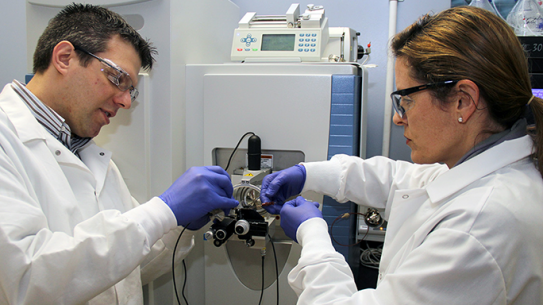