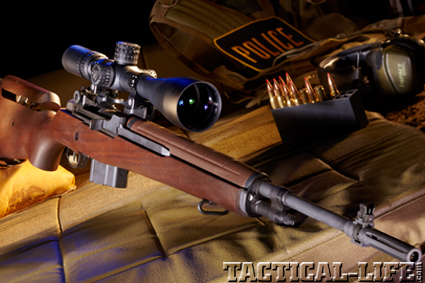 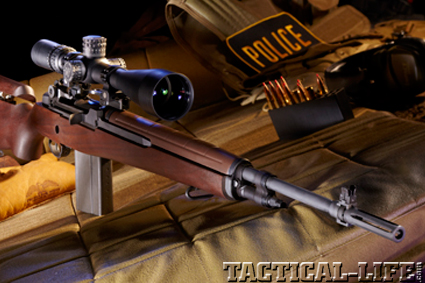 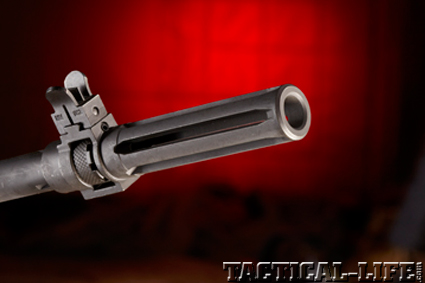 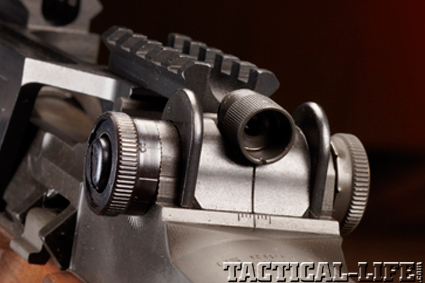 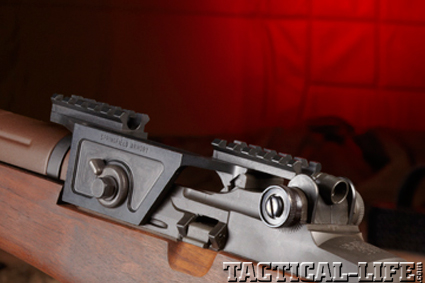 5 of 7
ScopeMount
Springfield’s easy-to-install 4th Generation scope mount is designed with a channel that still allows you to use the rear aperture. 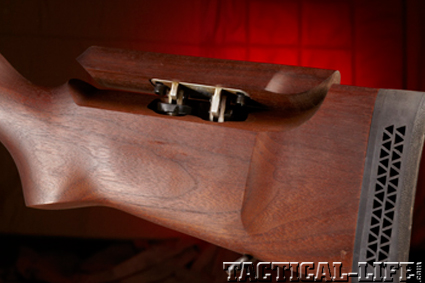 6 of 7
stock-2
The rifle’s walnut buttstock features an adjustable comb so operators can obtain the perfect cheekweld when an optic is mounted. 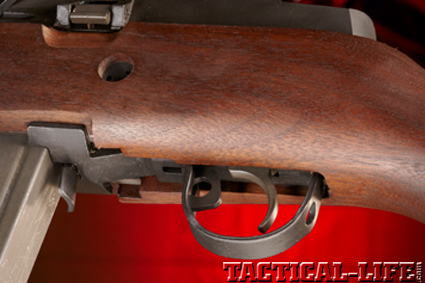 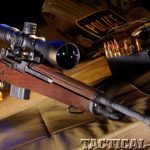 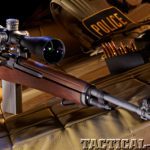 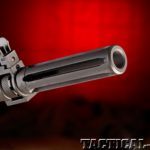 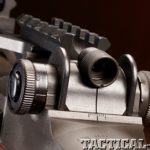 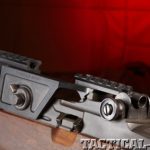 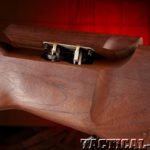 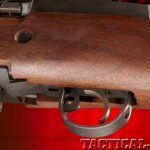 Certain characteristics are considered essential for a rifle used in a tactical environment: reliability, portability, ruggedness, accuracy, ease of replenishment (i.e. ammunition, parts and magazines) and effective firepower for all situations likely to be encountered. As a result, many widely used law enforcement weapons have a military background, as officers want weapons that have proven to be rugged, reliable and capable.

While the AR-15/M16 series may be the belle of the ball today when it comes to this topic, its immediate predecessor—the M14—also has a role in today’s law enforcement community. The M14, which employs the revered M1 Garand operating system, features a detachable double-column magazine and chambers the capable 7.62x51mm NATO (.308 Winchester) round. What follows here is a discussion of the M14’s civilian counterpart, the M1A—specifically, the Springfield Armory M21 Tactical.

The popularity of the M1A, introduced in 1974, was a pleasant surprise for Springfield Armory, which has no relation to the government arsenal in Massachusetts. Looking back, it seems preordained that the M1A would be a success: It is hard to argue against a wood-stocked, high-capacity .30-caliber weapon that had its roots in the “Greatest Generation” which won WWII. Remember, also, that the M16/AR-15 platform suffered in its first years from a reputation for unreliability stemming from its rushed introduction to the battlefields of Vietnam. Springfield demonstrated the accuracy potential of the M1A with its National Match and Super Match rifles, introduced in the mid-1970s.

The National Match and Super Match come equipped with a high-grade walnut stock; a 22-inch, Douglas Premium stainless steel, air-gauged, match-grade barrel with a 1-in-10-inch right-hand twist; a match trigger group with a 4.5-pound, two-stage trigger; a rear lugged receiver (since 1993); a match-grade gas cylinder and recoil spring guide; and lastly, a glass-bedded action. It did not take Springfield long to realize that the features found on National and Super Match M1As had their uses in the law enforcement tactical community. Thus, in 1985, the M21 Tactical was born, with Springfield offering the rifle with an optional Kreiger barrel instead of the standard Douglas Premium barrel, as well as a scope mount and walnut stock with an adjustable comb to aid in obtaining a proper cheekweld when using a scope. Match-grade iron sights also come standard on the M21.

Considering the recent upswing in 7.62mm NATO AR-pattern rifle production, the M21 Tactical appears to have been ahead of its time. Its ballistic potency and terminal effect make it a favorite among troops and law enforcement personnel operating in more rural environments. The rifle’s M1A platform, combined with the increased power of the 7.62mm cartridge, is the key to the M21 Tactical’s appeal.

The 22-inch-barreled Springfield M21 Tactical weighs approximately 11.6 pounds unloaded and has an overall length of 44.3 inches. Its walnut stock and adjustable cheekpiece comfortably interface with the M21’s two-stage, match-tuned trigger, which has a pull weight of 4.5 pounds. The 22-inch barrel balances portability and handling while maintaining the 7.62mm’s ballistics and terminal performance. Law enforcement should consider the M21 Tactical due to its power, accuracy and multi-mission capabilities for likely engagement distances—especially in terms of precision tactical shooting.

My test M21 arrived with a Springfield Armory 4th Generation scope mount installed. One criticism leveled against the M1A product line is the difficulty of mounting scopes over the receiver. The steel-constructed 4th Generation scope mount addresses that concern, making mounting a breeze. Of course, the rifle supports optics perhaps more appropriate for someone considering using the M21 Tactical as a more general-use rifle.

As mentioned before, Springfield Armory has already demonstrated the accuracy potential of the M1A via its National and Super Match models. The M21 Tactical does nothing to detract from the platform’s impressive reputation. For testing, I used Federal Premium 168-grain Match, Hornady 168-grain Match and Black Hills 168-grain Match ammunition. None of the ammo tested averaged groups larger than 2 inches at 100 yards. Few custom precision bolt-action rifles chambered in 7.62mm achieve this level of accuracy—let alone a factory-produced semi-automatic platform. For this article, I chose loads with the aim of maximizing accuracy; with that said, I also tested Winchester FMJ loads in order to gauge the M21’s reliability and handling characteristics. The M21 Tactical proved reliable throughout the evaluation, sending over 350 assorted rounds downrange. Quality magazines are the linchpin of a reliably functioning semi-automatic or select-fire weapon. The M1A/M14 magazine is proven in this regard, and there’s a plentiful supply of them available. The M21 Tactical’s 22-inch barrel, shooting 168-grain bullets, produced velocities in the 2,600-feet-per-second (fps) range when tested over an RCBS chronograph.

I evaluated the Springfield M21 Tactical at the Echo Valley Training Center (EVTC). The M21 showed its true potential by performing well not only within the 100-yard bays at EVTC, where I fired the gun from behind barricades and engaging multiple targets, but also from the prepared firing position line with targets placed beyond 300 yards. While 300 yards is on the far side of the law enforcement engagement spectrum, it’s confidence inspiring to connect at that distance on command.

I wore a Mayflower Research & Consulting 7.62 Hybrid Chest Rig to support the rifle. This chest right is designed to carry three 7.62mm NATO magazines in integral pouches that feature an adjustable shock-cord-retention-system closure. On the front of the magazine pouches are three general-purpose pouches sized to carry the tools of the trade: a mini binocular, a laser range finder, a GPS, a cell phone, a PDA, etc. The sides of the chest rig feature three rows of PALS webbing to allow users to tailor the remainder of the chest rig for a particular mission. The H-style harness features loops to route antennas, communication wires and hydration bladder tubing and is removable via four 1-inch ITW-Nexus side-release buckles. The body of the chest rig has a built-in map pocket with a Velcro closure.

For targeting, I situated TacStrike and Tubb Enterprises steel silhouettes randomly from 50 yards to 320 yards. The M21 Tactical made short work of them, striking various targets in quick fashion. The M21 proved just as effective against fluid-drained automobiles, penetrating windshield glass to strike the TacStrike steel pop-up targets located inside. By the way, for barrier penetration, Black Hills’ 180-grain AccuBond ammo is a top consideration, performing more reliably than match-grade or other high-accuracy bullet types.

The casual observer can easily differentiate, at any distance, between a steel target smacked with a 7.62mm round and one hit by a 5.56mm. Much is made of the fact that one can carry more 5.56mm rounds than one can of 7.62mm. While carrying capacity is important to those on extended missions and without easy access to supplies, the extra power and lethality of the 7.62mm matters more in briefer engagements undertaken directly from HQ. Of course, the dilemma, which can debated endlessly, is a false one for properly funded and armed law enforcement agencies: Operators should have access to both options and should make their choices in respect to their particular needs.

The Springfield Armory M21 Tactical is a benchmark performer in both precision and general-purpose LE roles. Chambered in 7.62mm NATO, it has power to spare, and the 22-inch barrel is not as much of a hindrance as one might expect thanks to the rifle’s excellent balance and handling. It’s a combination that’s hard to beat in terms of utility for law enforcement. For more information, call 800-680-6866 or visit springfield-armory.com. 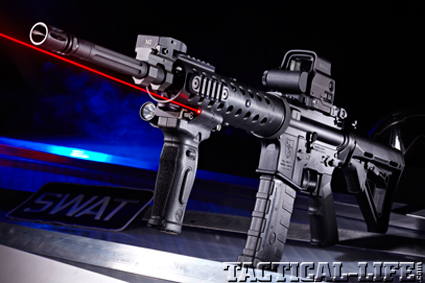 Certain characteristics are considered essential for a rifle used in a tactical environment: reliability,…