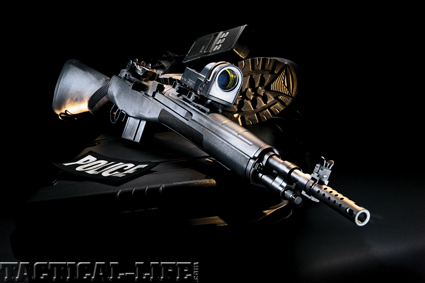 Based on the battle-proven M14 rifle, Springfield’s M1A Scout Squad offers 7.62x51mm power in a compact and controllable package. Shown equipped with a Meprolight M21.

When it comes down to it, nobody knows what a law enforcement officer needs to complete his duties more than the officer himself. Sure, there can be trends that seemingly sweep throughout the entire LEO community, but there is no getting around the fact that each officer knows best what he needs for his own particular beat.

While the tried-and-true shotgun was the mainstay long-arm for U.S. law enforcement for most of the 20th century, recent decades have seen a move toward the patrol carbine—most notably AR-pattern carbines in 5.56x45mm. However, while this type of weapon may be extremely capable of performing its duties in the more traditional urban environments, there can be times when a little more “punch” may be needed.

The solution comes in a familiar cartridge, specifically the 7.62x51mm. Known commercially as the .308, this round in its most common loadings propels a 168-grain .30-caliber projectile at around 2,600 feet per second (fps), offering a significant increase in potential downrange power over the more commonly seen 5.56mm. In fact, the two cartridges share a similar lineage, having both served as U.S. military standard cartridges (with the 5.56mm serving as the current cartridge, replacing the 7.62mm in the early 1960s). 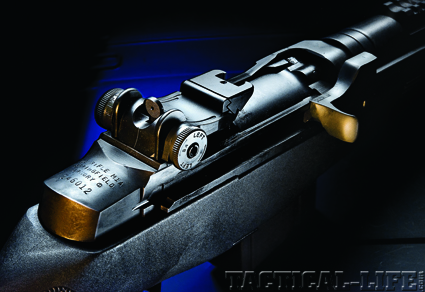 The fully adjustable aperture rear sight is flanked by heavy-duty wings. Note the
stripper clip guide forward of the sight.

Due to its unique capabilities, the 7.62x51mm cartridge can be just about ideal for officers who must patrol alone in rural areas, where the potential for a conflict involving longer distances is more likely and where they may have to shoot through barriers such as vehicles and the like.

So, with which weapon platform should the LEO looking for a 7.62mm patrol carbine go? Considering the military lineage of the cartridge, it would make sense to also look at the rifle the U.S. military adopted to chamber it—the M14.

Based on of the renowned M1 Garand rifle of World War II fame, the M14 is a large, rugged and powerful rifle. Designed to fire the then-new 7.62x51mm cartridge, the 1950s-era M14 was a steel and walnut masterpiece hearkening back to an earlier era of firearm design. The gas-operated, rotating bolt, 20-round magazine-fed rifle took the basic Garand design to the next level, offering a select-fire 7.62x51mm offspring of the fabled weapon.

Yet despite the M14 platform’s many strengths, the U.S. military soon began to consider the M16 in 5.56x45mm, an ultra-modern rifle that was as different as night and day from the more traditional M14. However, this did not spell the end for the M14, with it being employed by the U.S. Navy as well as being reissued to frontline troops in the current War on Terror.

And the rifle has gained an equally fervent following in semi-automatic-only form, through the commercial efforts of the Springfield Armory company, who resurrected the classic design as the “M1A” with a newly made receiver and an interesting array of modifications to the design. In addition to offering traditionally configured variants of the rifle with walnut stocks and full 22-inch barrels, the company has also developed versions ranging from long-range precision rifle variants to the ultra-short SOCOM series of 16-inch-barreled carbines—with a wide range of offerings in between. 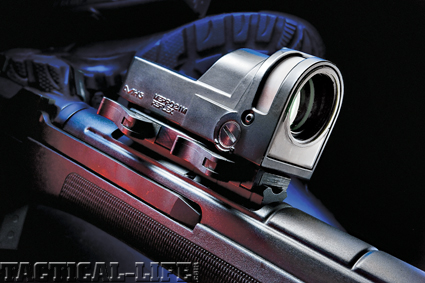 In fact, the subject of this article, the M1A Scout Squad, fits neatly in the middle of the company’s offerings. It combines several appealing attributes into one package just about ideal for those looking for a patrol carbine that is both handy and compact while still being capable of reaching out long distances and offering barrier-busting punch.