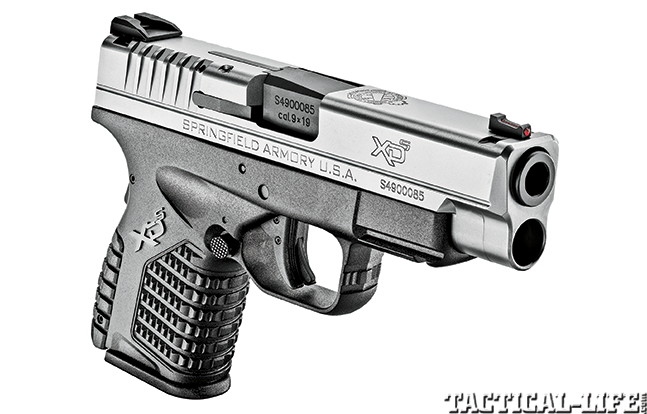 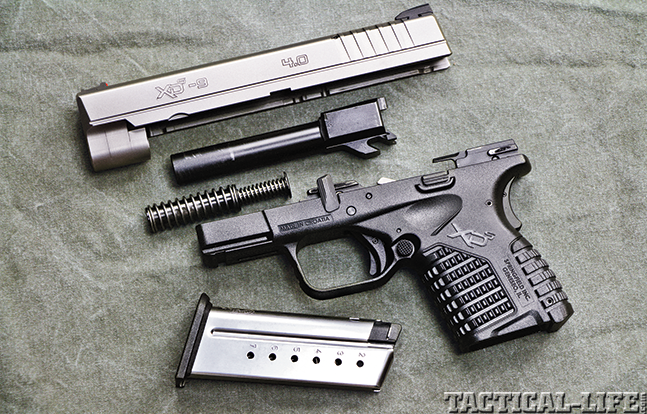 2 of 8
Springfield’s XD-S 4.0 Redefines Backup Carry
The 9mm pistol has a simple design, making it very easy to disassemble for cleaning and maintenance. 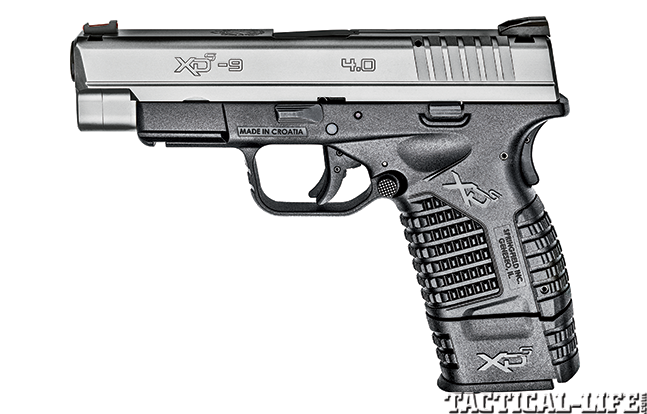 3 of 8
Springfield’s XD-S 4.0 Redefines Backup Carry
Springfield ships the pistol with an extended nine-round magazine with an X-Tension sleeve so operators can get a full grip. 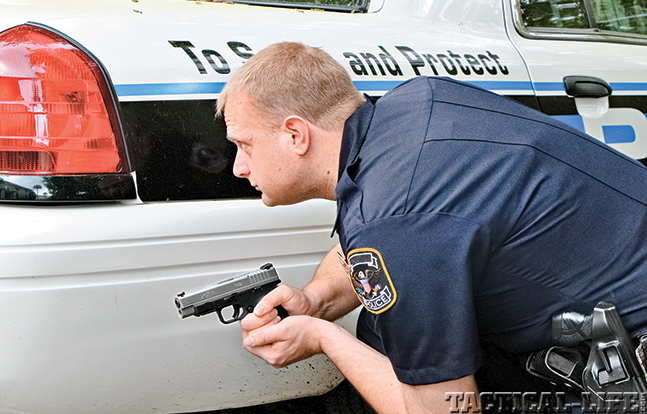 4 of 8
Springfield’s XD-S 4.0 Redefines Backup Carry
While it’s small enough to be concealed in an ankle holster, the Springfield XD-S 4.0 is still large enough to be a real fighting handgun when you need it most. 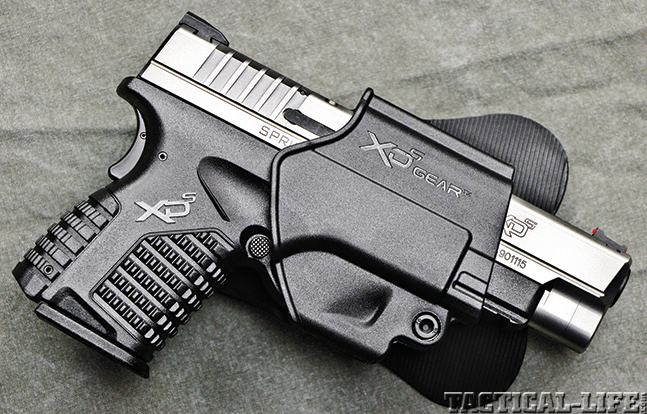 5 of 8
Springfield’s XD-S 4.0 Redefines Backup Carry
Springfield Armory ships the XD-S 4.0 with a variety of accessories, including a paddle holster suitable for off-duty carry. 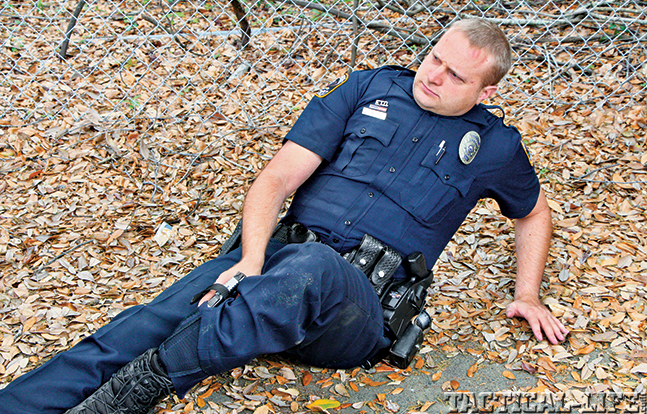 6 of 8
Springfield’s XD-S 4.0 Redefines Backup Carry
While it’s small enough to be concealed in an ankle holster, the Springfield XD-S 4.0 is still large enough to be a real fighting handgun when you need it most. 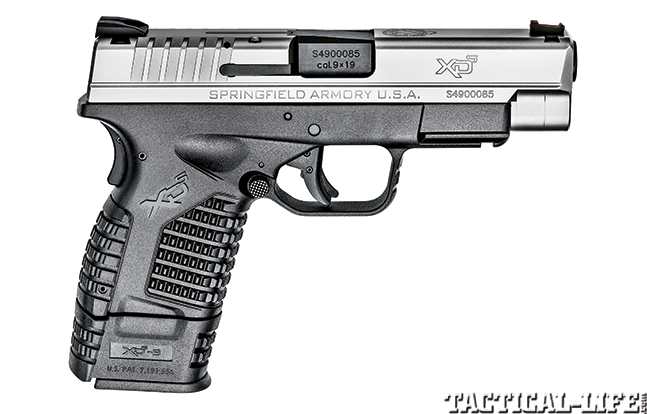 7 of 8
Springfield’s XD-S 4.0 Redefines Backup Carry
The new XD-S 4.0 is ready to perform with a longer sight radius, high-visibility sights, an ambidextrous mag release and much more. 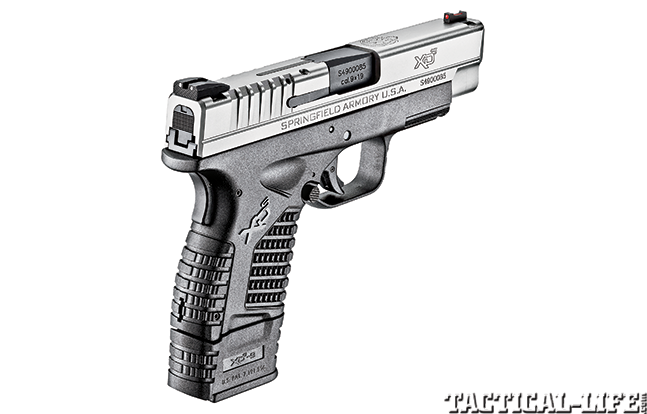 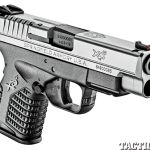 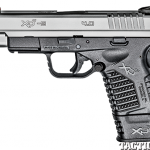 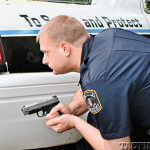 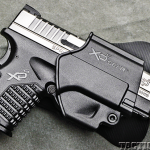 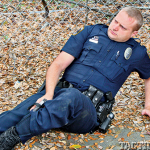 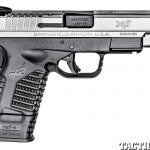 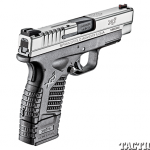 Drawing a backup gun is generally a result of your day having gone from bad to much, much worse. Your primary duty gun may be lost, disabled or otherwise unreachable at a time when deadly force is needed. Because a backup gun is meant to be concealed until needed, many times officers will sacrifice a reliable caliber and good shooting characteristics to get a pistol that is small enough to hide in an ankle or vest holster. When the moment of truth arrives, would you feel comfortable relying on a compromise gun selected primarily for ease of concealment?

Fortunately, Springfield Armory recently introduced a new pistol that might be the perfect backup gun for many officers. It conceals well, offers improved handling characteristics compared to other small guns and comes in a respectable duty caliber. Say hello to the XD-S 4.0 in 9mm.

Two years ago, Springfield Armory introduced the XD-S line of handguns with 3.3-inch barrels. These little pistols offered a compact size in both length and width but came in proven calibers: .45 ACP and 9mm. The new XD-S 4.0 9mm keeps the same thinness and height, but lengthens the slide and barrel out to 4 inches.

Increasing barrel length does a number of positive things to improve the shootability of the pistol. With a longer slide, Springfield Armory is able to increase the sight radius—the distance between the front and rear sights—to allow for easier and more accurate sighting. Generally speaking, the longer the sight radius, the more precise the shot placement.

“Coupled with the smooth trigger pull and longer sight radius, the gun’s fit in my hand allowed me to shoot this pistol very well.”

A longer barrel and slide assembly will also soak up more of the felt recoil. While few will claim that a 9mm generates uncontrollable recoil, in some small guns the kick of a 9mm round can be stout. With extra weight in the top end of the gun, less felt recoil will be transferred to the shooter.

Another benefit of the longer barrel is that bullet velocity is increased when compared to the shorter-barreled pistols. While there is a point of diminishing returns when increasing barrel length, in short-barrel pistols even a fraction of an inch can measurably drop bullet velocity. Bullet velocity is not the only thing to consider when talking about the potential effectiveness of a self-defense round, but in general terms, more velocity will help ensure a 9mm bullet will expand and do its job.

Adding almost 0.75 inches to the length of the pistol might concern some officers: Can it still be concealed? Most of the time, it is the height and width of a handgun—not the length—that will make a gun difficult to conceal. In many backup gun carry locations, the slide of the gun runs along the length of the body, making the measurement largely inconsequential for concealment. This allowed Springfield Armory to gain the benefits of a longer barrel without diminishing the gun’s ability to be discreetly carried.

Even with the longer barrel and slide, the XD-S 4.0 is still relatively light, weighing only 25 ounces with an unloaded magazine. This is heavier than some backup guns, but I found that it was not uncomfortable to carry in an ankle or vest holster.

The XD-S 4.0 ships with two magazines. One is a flush-fitting magazine that holds seven 9mm rounds. When inserted into the pistol, all of my fingers were able to grip the gun. Although shooting a gun without a pinky on the grip is possible, I much prefer to have just enough length to get all of my hand on the grip.

Part of the reason that all fingers are able to fit onto the gun’s short frame is because the triggerguard is undercut. Instead of the triggerguard mating with the pistol’s frame behind the trigger at a 90-degree angle, the guard actually slopes up prior to intersecting with the frame. This allows for the hand to sit higher up on the pistol and get about a half-inch more grip on the gun.

A nine-round extended magazine also ships with the Springfield pistol. An X-Tension sleeve comes with the magazine. The X-Tension slips onto the mag body, providing more grip surface for the shooter’s hand. Additionally, the X-Tension also serves as a stop to keep the magazine feed lips from slamming into the slide assembly. A damaged magazine can cause gun malfunctions.

The grip texture of the XD-S 4.0 is pronounced without being overly aggressive. It helps provide a very solid hand-to-gun grip, but does so without any sharpness that might snag or damage clothing.

When I had the gun at the range, I let other shooters handle the XD-S 4.0. Almost every one initially preferred the extended magazine. However, many of them ran into the same problem I experienced with the extended magazine. With the X-Tension sleeve in place, the magazine will not drop free because the sleeve hangs onto the palm of the shooting hand. The only reliable way I found to remove the extended magazine was to strip it out with the support hand. While reliable, stripping the longer magazine is slower than simply dropping the standard-length magazine.

The XD-S 4.0 has an ambidextrous magazine release button. There is no need to do any work to swap the button from one side to the other.

The pistol comes standard with a red fiber-optic front sight. The rear sight is a ramped, two-dot sight. Some shooters prefer a ramped rear sight to reduce the possibility that it will snag when drawn from concealment. However, I much prefer to have a hard front edge on the rear sight so that I can still manipulate the slide off of a belt in a one-handed immediate-action drill.

Both the front and rear sights are dovetailed into place. This allows for any needed drift adjustments and the easy replacement of the sights if so desired. Several manufacturers make night sights that will fit the XD-S’ factory dovetails.

I was eager to get the XD-S 4.0 to the range and see how it would perform. I had high expectations, and I was happy to have the pistol meet each and every one.

To break the gun in, I ran a few boxes of 115-grain Remington UMC and Winchester FMJ ammunition through the gun. Both loads ran perfectly fine. I then moved on to premium hollow points from Hornady, Speer and Remington. These loads also ran without a hitch. Sometimes a new gun, especially a compact pistol, will need a break-in period, but that wasn’t the case with the Springfield XD-S 4.0. It was ready for duty as delivered.

The ammunition velocities were about where I expected them to be. It has been my experience that the published specifications for ammunition tend to overstate velocity. Even so, the 4-inch barrel on the XD-S turned in velocity measurements that were within spitting distance of the manufacturers’ specs. Bullet velocities approaching factory specs is uncommon in a pistol suitable for backup gun use. As I stated earlier, velocity is not the sole factor in the elusive thing called “stopping power.” However, it is certainly influential in how well the bullet performs when striking the target.

The compact pistol’s accuracy was quite good. Without the benefit of a rest, I managed a best five-shot group a hair over 1 inch with the standard-pressure Speer Gold Dot load at 15 yards. Four of the holes were tightly clustered, with a single flyer opening the group slightly. Other self-defense ammunition choices turned in very good accuracy as well. I found that the accuracy of all of the ammunition was more than acceptable for self-defense work.

The trigger pull on the XD-S is smooth and constant. The reset is short and has a positive feel. Springfield Armory lists the trigger pull as being between 5.5 to 7.7 pounds. My test gun’s trigger felt closer to the heavy end, but it was still much lighter than what would be found on a traditional double-action pistol.

I have had a chance to shoot the 3.3-inch-barreled XD-S in 9mm. Compared to the shorter-barreled XD-S, this pistol does indeed have less felt recoil. The grip on the gun provided enough length to maintain control during recoil. In this regard, the XD-S 4.0 is probably one of the better compact 9mm pistols on the market.

While each officer has different hands, the XD-S simply feels great in my hand. The grip circumference and distance to the trigger were seemingly tailor-made for my hand. The gun’s fit in the hand is exceptionally important for consistent and accurate shooting. Coupled with the smooth trigger pull and longer sight radius, the gun’s fit in my hand allowed me to shoot this pistol very well.

One of the things that differentiates the XD line of pistols from other polymer guns on the market is Springfield Armory’s use of a grip safety. Some people, including myself, question the need for an additional safety device on the gun. As a skeptic, I thoroughly tested the grip safety on the XD-S 4.0, but I could not get it to malfunction. With every reasonably safe shooting grip, the gun fired as expected. Conversely, when the safety was not depressed, the trigger would not move to the rear and fire the pistol. Although I do not feel the safety is necessary, I would not hesitate for a moment to carry this pistol.

No gun is perfect for every situation, but the XD-S 4.0 will definitely appeal to a lot of uniformed police officers looking for a quality backup gun. It offers great accuracy, reasonable capacity and still manages to conceal well.

The length of the 4.0 has definite advantages in both shooting accuracy and bullet performance, while offering reduced recoil compared to other backup guns. Even though a 4-inch barrel on a backup gun might be considered “too long” at first glance, the length did not hinder the draw or actual carry.

I highly recommend the XD-S series of pistols for backup duties. But the XD-S 4.0 9mm is more than just a secondary pistol. It would easily fit the needs for carrying off-duty or even for on-duty plainclothes officers. It may be the best XD-S from Springfield Armory yet. 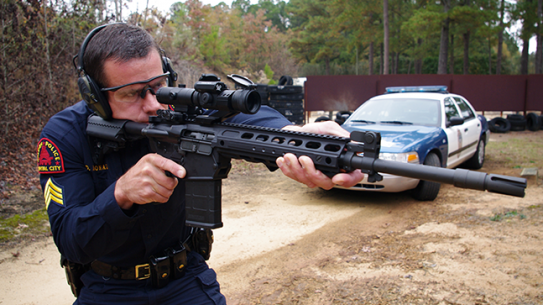