0
SHARES
46
VIEWS
Share on FacebookShare on Twitter
SRM Arms’ 1216 is a milestone in shotguns. In the right hands, this semi-auto 12 gauge bullpup is much more effective than traditional shotguns. The ability to unleash 16 shells in under six seconds makes it is a huge force multiplier. Shown here with Aimpoint Micro H-1.

Since its inception and despite its origins, the shotgun has been regarded as a devastating firearm, coming into its own as a fighting tool. With the advent of repeating shotguns—versus single- or double-barrel models—the shotgun’s potency escalated. The Winchester 97 was so effective during World War I that the Germans sought to have it banned: the combination of Winchester 9-pellet 00 buck and the gun’s rapid firing capability (by holding the trigger back and working the pump action) proved deadly. In every war since, shotguns have served our military well. And as the repeating shotgun took hold on the battlefield, it also made a move into law enforcement, remaining there to this day. 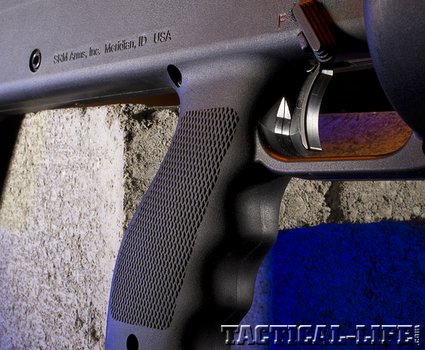 In the safe position, the lever protrudes into the triggerguard, providing a tactile indication of the 1216’s condition.

Improvements to the fighting shotgun were inevitable. Increasing capacity was a priority: Traditional tube magazines can hold unlimited ammunition as long as you don’t mind how awkwardly the magazine extends beyond the muzzle! There have been efforts toward increasing tube magazine capacity without making it long or unwieldy, and SRM Arms has developed a novel way of tackling that problem with their revolving SRM 1216 shotgun. Located in Boise, Idaho, SRM Arms, manufacturer of high performance shotgun components and accessories, was founded by “gun guys” Jeff Hajjar, inventor of Sure Cycle System and Terror Chokes, and Warren Stockton, co-developer of the Calico subgun.

In the early 2000s, Jeff and Warren discussed shotguns with several special forces personnel, who described their dream shotgun as sleek, compact and durable with a detachable magazine. Then while driving home, Jeff and Warren sketched out their first shotgun design on a napkin. They previewed their first model in 2008 with final versions arriving late in 2011. Their work and expertise garnered attention: before the SRM 1216 had even shipped, SRM Arms was awarded an R&D contract to “fix design and performance problems with” the Marines’ “current semi-automatic shotgun system.” 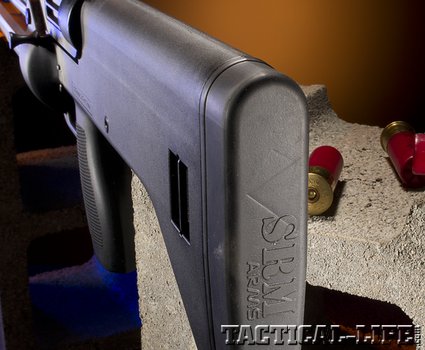