by Caleb Giddings
in Uncategorized
0

When I was a young man, my father was a deputy with the Los Angeles County Sheriff’s Department. I remember back then that all cops carried shotguns in their cars. It was the standard at the time. Movies only reinforced that, and I grew up on a steady entertainment stream of TV officers reaching for the Ithacas and Remingtons when the situation was too extreme.

While shotguns have remained popular both in TV and real life, a growing trend in LE tactics has led to more and more officers being equipped with a patrol carbine or patrol rifle. One of the driving forces behind innovation in rifle development has been 3-Gun competition, where shooters use pistols, rifles and shotguns to complete challenging courses of fire. The technological advances pioneered for competition shooters have a way of getting into military and law enforcement circles. Now that trend is reflected with the Stag Arms Model 3G, the competition rifle from Stag Arms that would be right at home in a police cruiser. 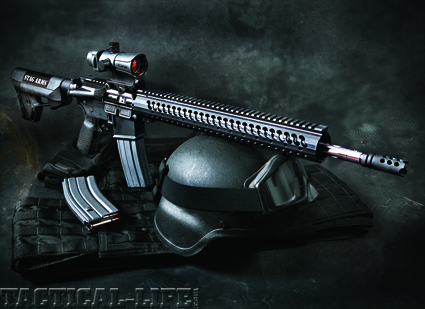 Gun Details
It’s pretty easy to run down a list of features on a new rifle like this and see plenty of things to like, but the 3G also has features that make it a good fit for a dual role in squad cars and the competition fields. The Stag Arms Model 3G comes from the factory with an 18-inch fluted heavy barrel that is surrounded with a Samson 15-inch free-floating handguard and capped off with a Stag Arms compensator. This competition rifle also has a Geissele Super 3-Gun trigger, Magpul ACS stock and Magpul MOE grip. Dueck Defense Rapid Transition Sights are also available. These are iron sights offset at a 45-degree angle that allow for close-range rapid shots if you’re using a magnified optic. The barrel also has a 1-in-8-inch twist rate, meaning it will stabilize 5.56mm rounds that weigh anywhere from 40 to 75 grains. Heavier bullets tend to be in vogue for competition shooting, and Hornady also offers their excellent TAP rounds in grain weights from 55 to 75. 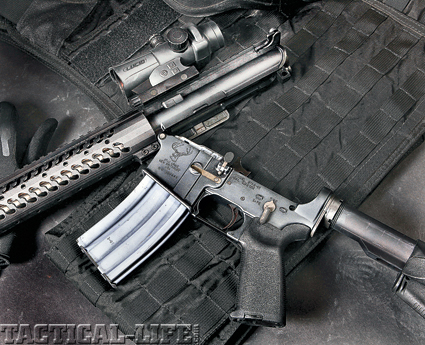 Stag Arms builds their uppers and lowers in-house with great attention to detail. You won’t feel any play between the two.

One of the biggest benefits of the Stag Arms 3G for both competition shooters and LE officers is its weight. With my optic mounted, it weighs in at less than 8 pounds but still has a rifle-length gas system and an 18-inch barrel. Those two factors combine with the ridiculously effective compensator to produce a gun that’s lightweight, easy to tote around and even easier to shoot.

The fact that it’s easy to shoot is what really nails it for me—the goal in competition shooting is to get lead on target as fast as possible, and a patrol carbine is there when you need to reach out and get good hits when a pistol won’t cut it. Those purposes are similar, and the Stag Model 3G fits both roles. Ergonomics play a huge part in this, and the Magpul ACS stock and MOE grip are a massive improvement over what you see on most M4 clones. The Magpul ACS stock especially allows you to get down low behind the bore axis of the gun to help control recoil and move the muzzle in transitions. The real trick feature, though, is the Geissele trigger, which breaks at less than 3 pounds on my rifle. Some might say that’s too light for law enforcement work, but you cannot deny that it makes the gun pleasant to shoot.

In fact, there’s only one component of the gun that I don’t like for competition or law enforcement use, and it’s easily changed. That would be the proprietary muzzle brake. Now, this is the first time I’ve ever had to write this, but the reason I don’t like it is because it works too well. Using several different types of factory ammo, the gun actually has inverted recoil. The brake works so well that it forces the muzzle of the gun down in between shots. If you’ve spent a lot of time learning how to control recoil, it’s quite a surprise. Honestly, for LE use, I’d want to change the brake to something that could accept a suppressor, and for competition use I tend to use the very excellent Miculek brake.

For optics, I prefer zero-magnification red-dot optics. One of my favorite affordable optics is the Burris FastFire II, which comes in at a paltry $250, weighs almost nothing, and still allows me to get standing off-hand hits at 100 yards on an 8-inch plate. The downside of an optic like this is that it makes shooting for precision groups at 100 yards somewhat difficult. However, at 25 yards, I was able to produce multiple groups that measured less than 0.50 inches using several different varieties of ammo. With a 4-MOA dot, that’s a group I’ll take all day long. For shooting out to 100 yards, the FastFire was switched out for another great, affordable optic, a Lucid HD7 with a 3X magnifier.

It was time to put the Stag Model 3G through its paces. For 100-yard shooting, I tested the rifle with its front end on sandbags. I supported the rest of the gun myself. The best accuracy result was produced with Fiocchi 40-grain V-MAX bullets, which fired a 1.2-inch five-shot group, with the best three rounds landing in a 0.75-inch area. This is actually a varmint load, but it uses the excellent Hornady V-MAX bullet and achieved spectacular accuracy out of the rifle at 100 yards.

Far more important to me as a competition shooter than single, 100-yard shots is the rifle’s ability to put rapid rounds on target. The same sort of thing is extremely important to an officer pulling their patrol rifle out of the car: Can I get multiple hits on the bad guy at the end of a long hallway? And if so, how fast? To find out, I went to West Coast Armory Indoor Range in Bellevue, Washington, to really put this gun through some high-speed shooting drills. By the end of the test, the excess oil was smoking off the barrel. I was wearing a glove on my support hand to keep it from burning, but the gun was still running.

Bill Drills are a standard measure of trigger speed and accuracy. At 15 yards with the Stag Arms Model 3G, I could run a six-shot Bill Drill into an 8-inch circle in close to two seconds. So then I tried pairs on a 3-by-5-inch index card at 7 yards. Same results: fast, accurate hits. I ran out of good ammo, so I started feeding the gun all the FMJ ammo I could pull out of my locker: Federal 55-grain, PMC, some lightweight varmint hollow points, random bags of handloads. I tried using 20-round mags, 30-round PMAGs, 30-round GI mags, and the rifle kept feeding. So I kept shooting it.

I ended up with a pile of smoking brass at my feet, a sore spot on my shoulder from the volume of rounds, and a slight ringing in my ears from the incredible muzzle blast of the compensator indoors. And I loved every minute of it. I like to buy a gun that works and then generally not mess around with it. The Stag Arms Model 3G allows me to do just that—there is exactly one part on this gun that I’d change, and then I’d leave the rest of it alone. 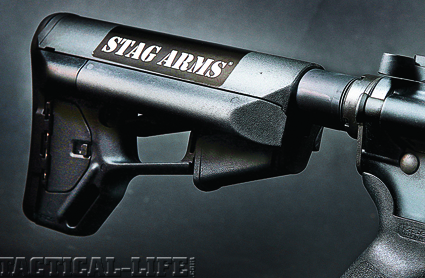 However, other shooters, and especially officers may want to mount at least one more item—a light. The Stag Arms Model 3G’s rail system offers a single rail down the top of the gun, but it also comes with three more rail segments that bolt onto the sides or the bottom of the handguard, giving you a perfect place to attach a tactical light. If you want to mount a foregrip, a light or a laser, or all three, the Model 3G gives you the options and the space necessary to get it done.

They say that “game gear” doesn’t have a place in tactical situations. But “game gear” has been the primary driving force behind innovation in firearms; the desire to go faster and more accurately forces competition shooters to push their gear to the limit and then find a little bit more to get the big win. Game gear made lightweight, compact optics a reality, and now it would be stranger to see a rifle without an optic than one with. Compensators and muzzle brakes were born for the competition world but are just as popular on LE and tactical carbines now as they are on “game guns.”

Just because a gun is designed for competition doesn’t mean that it’s a competition-only gun. I wouldn’t expect an officer to carry a tricked-out race gun as their primary pistol, but I have seen cops carrying Glock 34s as their duty gun. The things that make it an excellent pistol for competition also make it an excellent gun for everyday use; that same principle applies to the Stag Arms Model 3G. Don’t look at it and see a rifle designed for playing games, because really, it’s a rifle designed to put as many rounds on target as quickly as possible. That’s a feature law enforcement and competition shooters can agree is important.