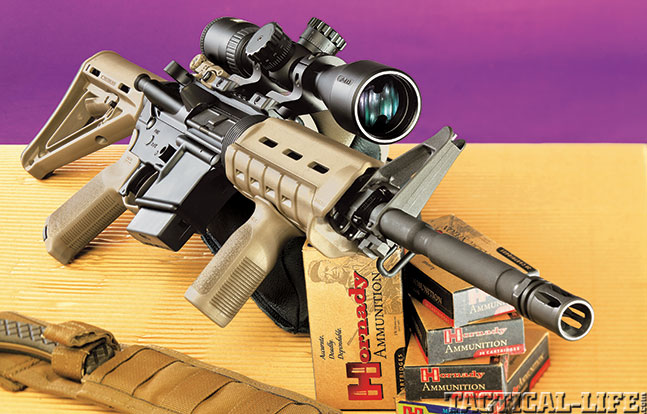 1 of 3
State Compliant Carbines: Colt Teams Up with Other Manufacturers
Tricked out with Flat Dark Earth Magpul furniture, Colt’s 5.56mm LE6920CMP-FDE is an M4 upgrade built specifically for AR fans who live in restrictive states. Shown equipped with a Nikon P-223 scope. 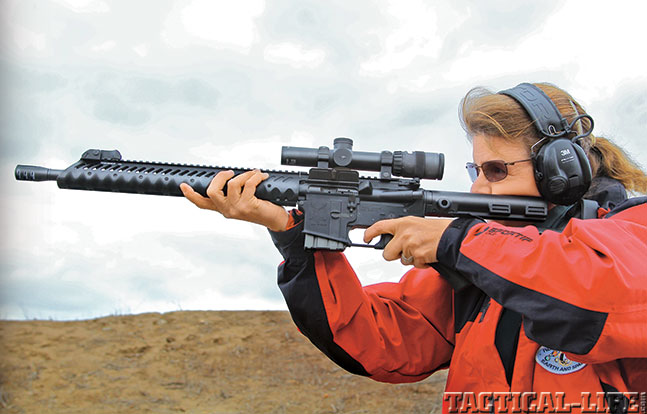 2 of 3
State Compliant Carbines: Colt Teams Up with Other Manufacturers
If you live in California or New York, the FRS-15 “stock” and rifle-style grip — shown on a Stag Arms Model 3TL-M — provides a “non-assault weapon” solution. 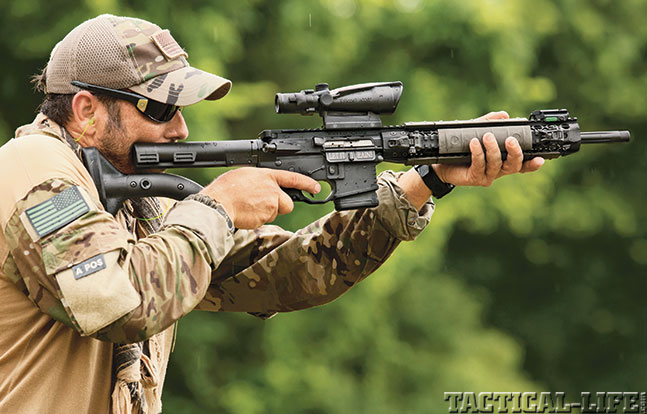 3 of 3
State Compliant Carbines: Colt Teams Up with Other Manufacturers
If you live in California or New York, the FRS-15 “stock” and rifle-style grip — shown on a Black Rain Ordnance carbine — provides a “non-assault weapon” solution. 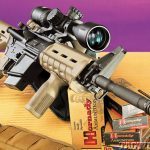 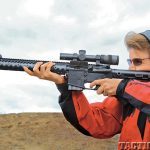 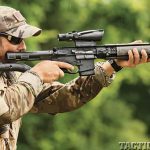 California is a huge state with a population to match. Recent census data tells us that more than 37 million people call the Golden State home. When I stopped by Colt’s booth at a recent gun show, I asked a representative about the reasoning behind the company introducing several new California-compliant rifles. Their response—that one in seven Americans lives in California—is pretty justifiable. Add recent firearms legislation in New York, and the market gets even larger for modified AR-style rifles.

Colt, one of the world’s leading designers, developers and manufacturers of AR-platform rifles and carbines, now offers five rifles that are compliant with California’s “bullet button” laws. To give readers a close look at what’s available from Colt for California shooters, I’ve taken a couple of these popular rifles and put them through their paces on the range to help buyers gauge which model best fits their shooting needs. In short, Colt’s LE6920CA, the Magpul-accessorized LE6920CMP and the LE6940CA are all available for shooters in California.

With its lightweight design, the 5.56mm Colt LE6920 carbine is a popular choice for tactical deployments and traditional patrol duties. Weighing 6.29 pounds unloaded and measuring 35.5 inches with the stock extended, the LE6920 is extremely mobile. The LE6920CA has a 16-inch barrel with a semi-auto rate of fire and an effective range of 600 meters.

The Colt LE6940CA is a popular option for tactical operators. This M4-style rifle weighs slightly less than the LE6920 and offers a one-piece monolithic upper receiver with a top Picatinny rail from the rear all the way to the front sight. Put succinctly, this is the Golden State’s M4 upgrade. The monolithic upper was designed to provide plenty of real estate for sights, optics and other accessories. The forend also has rails in the 3, 6, and 9 o’clock positions for accessories, and every rail is marked for properly returning items to their original position after removal.

“Colt, one of the world’s leading manufacturers of AR-platform rifles and carbines, now offers five rifles that are compliant with California’s ‘bullet button’ laws.”

The upper receiver is a CNC-machined forging. The gas block incorporates an integral, flip-up front sight with a protected post and a bayonet lug on the bottom. Colt also includes a flip-up rear sight that is adjustable for elevation and windage.

The LE6940CA has several aspects that are similar to a mil-spec M4, starting with the four-position receiver extension. My test gun had a Rogers Super-Stoc buttstock that has not only a paddle-type adjustment lever, but also a lever lock to keep the stock from inadvertently moving out of position. The stock adjusts the overall length from 32 to 35.25 inches, and the length of pull can be adjusted from 10
to 13.25 inches.

Those with first-hand familiarity with an M4 will also recognize the forward assist, dust cover, A2 pistol grip and shell deflector. The barrel is chrome-lined like an M4’s, too. No surprise, the bolt, bolt carrier and fire control group are from the AR-15. The safety lever, bolt release and the California-compliant magazine release all reside in the same places. The “bullet button” mag release is activated by pushing the inner portion with the tip of a bullet or other pointed tool.

The LE6940CA’s barrel is also similar to that of an M4, despite being longer. The M4-profile barrel measures 0.75 inches in diameter at the gas block and slims down to 0.64 inches underneath the handguard. Chambered in 5.56mm NATO, the 16.1-inch barrel is rifled with a right-hand, 1-in-7-inch twist rate and capped with a birdcage-style flash suppressor. This stabilizes 55- to 77-grain mil-spec loads with ease. Protecting the shooter’s hands is a sheet-steel heat shield that is pinned underneath the quad-rail handguard. The barrel is attached to the upper receiver by way of an improved barrel nut.

Designated as a lightweight LE patrol carbine, the Colt LE6940CA was designed to meet the needs of the law enforcement officer. For accuracy testing, I mounted a Trijicon AccuPoint 5-20X mil-dot scope to wring out the rifle’s capabilities. I fired three 5-shot groups at 100 yards from a solid bench with four different factory loads. There was relatively no wind on the range that day. The trigger on this rifle is a standard mil-spec, two-stage unit with a pull weight of 7 pounds.

The accuracy testing complete, I mounted a Lucid HD7 red-dot sight and a Lucid 3X magnifier. The LE6940CA’s monolithic top rail is ideal for this setup, since it allowed me to mount the optics farther forward than what would’ve been possible on a standard flattop AR.

Complementing the Colt LE6920CA carbine are some of Magpul’s most popular firearm accessories in either black or Flat Dark Earth. Colt’s LE6920CMP-B and LE6920CMP-FDE are the bullet button versions of one of Colt’s newest rifle offerings, the LE6920MP.

Magpul parts that come standard on these rifles include the MOE Vertical Grip (MVG) that’s attached to a matching MOE handguard. A color-matched MBUS Gen 2 backup rear sight comes attached to the upper receiver’s Picatinny rail. The lower receiver is outfitted with a Magpul MOE-K pistol grip, which features a storage compartment, an MOE triggerguard and an MOE carbine buttstock. I was able to test the Colt LE6920CMP-FDE, which has Flat Dark Earth Magpul furniture.

This carbine features the same 16-inch, M4-contour, chrome-lined, 1-in-7-inch-twist barrel as the LE6920CA. The A2-style protected front sight is integral to the mil-spec gas block. Affixed to the barrel within the sight is a clamp-on, side-facing sling swivel.

At the range, I mounted a Nikon P-223 3-9X scope on the Colt LE6920CMP-FDE. Since the Nikon scope features a BDC reticle, I used the company’s Spot-On web-based calculator to dial in the Hornady Z-MAX loads. Adjusting the scope to 6X put the aiming circles close to 100-yard increments with my 100-yard zero. Steel targets set at 200, 400 and 600 yards provided some long-range fun, while I held “Kentucky windage” on the farthest target to allow for variable winds.

I had ten 30-round magazines loaded with a broad variety of factory loads that ranged from 35-grain Winchesters to 77-grain Black Hills rounds. On top of the rounds I used for sighting in and testing the carbines’ accuracy, I ran an additional 150 rounds through the LE6940CA and the LE6920CMP-FDE. Both rifles ran reliably, without a single malfunction.

These California-compliant carbines proved themselves to be reliable, accurate tools. An AR-platform carbine with a Colt roll mark has a certain mystique. Now, California shooters can share that legend with this family of Colt carbines, too. 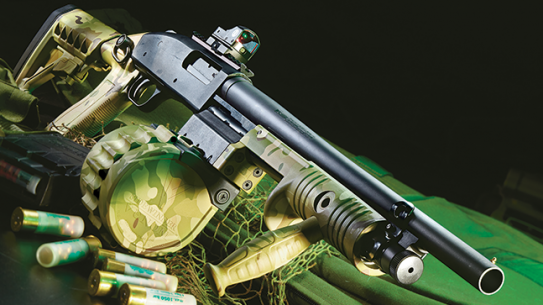