0
SHARES
5
VIEWS
Share on FacebookShare on Twitter
With an M4 and a pistol, this NYPD ESU member is equipped to handle a threat on the mean streets.

In any war, the enemy sometimes invades your citadels. It’s true in the war on crime as well. The
phenomenon of criminals attacking police stations or substations is nothing new. It goes back to at least the 19th century. Part and parcel of the Wyatt Earp legend is Case One, in which the fabled lawman was said to have stood alone outside the jailhouse and backed down a violent crowd that had come to invade the facility, drag out a prisoner, and lynch him.

Motorized urban desperados of the 1930s used police stations as sources for guns, and turned them into crime scenes. On October 12, 1933, members of John Dillinger’s gang invaded the sheriff’s station/jailhouse of Sheriff Jesse Sarber in Lima, Ohio, to liberate their leader, who was in custody there. The sheriff had been caught off guard without a gun. When he made a desperate attempt to lunge for where his duty belt and holster were hanging to get at his revolver, he was shot and mortally wounded. The sheriff bled out as Dillinger and his cohorts made their escape in Case Two. Raiding police stations for rifles, handguns, shotguns, and Thompson submachine guns was a Dillinger gang signature crime. They did so in Auburn, Indiana; Peru, Indiana; and Warsaw, Indiana. 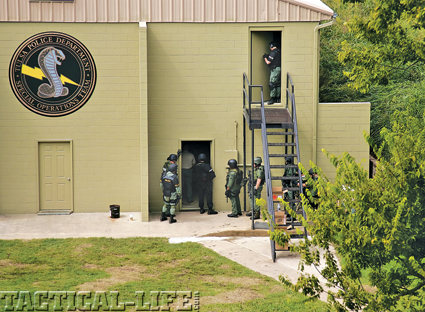 Training for LEOs should incorporate tactics for not only entries to facilities and homes, but also how to repel attackers that may strike within agencies’ “safe havens” such as precinct headquarters.

However, raids on American police stations aren’t just history from before today’s generation of cops. Recent events have put the concept to the forefront of officer safety concerns.