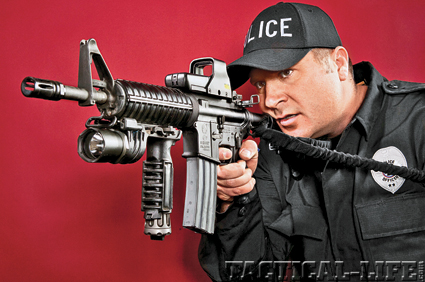 When your off-hand is injured, you can still shoot a long gun accurately from the shoulder-mounted position.

Since being shot in the hand or arm is a definite possibility, officers need to be proficient in shooting one-handed. This isn’t a big deal with a handgun, but shooting, and even more importantly, weapon handling, can be a little tricky with a long gun such as an AR-15 or shotgun. Of course, there may be times when transitioning to a handgun is the best option. However, with practice, you can certainly keep your long gun up and running one-handed. This would afford you the advantage of superior firepower, extended range, and in the case of the AR-15, a much higher magazine capacity. For simplicity, let’s consider the officer is a right-handed shooter whose left hand or arm has been rendered non-functional. 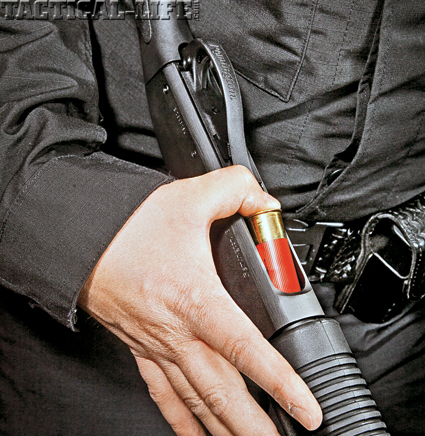 Reloading a shotgun one-handed can be difficult and time consuming—two things you don’t need in a confrontation. Practice first.

There’s no denying the fact that long guns are meant to be fired two-handed. However, if you have proper two-handed shooting technique, shooting with only your dominant hand isn’t much different except that you aren’t able to use your off-hand to support the front of the weapon. This is where it is critical to keep your elbow positioned vertically, under the weapon. If your elbow is oriented horizontally, you’ll find it extremely difficult to keep the muzzle from dipping. At distance, bracing the barrel on an object will add stability and improve accuracy. With a little practice, you’ll find that shooting one-handed is not as difficult as it sounds. In fact, shooting is the easy part.

If you get fatigued or when you’re adversary closes distance, maintaining a shoulder mount can be more trouble than it’s worth. In such case, transitioning to a sidearm is a viable option. However, if you don’t have a sidearm or if you prefer to stick with your long gun, you can employ a “close-quarter hold” with the stock tucked under your arm. This position affords you considerably more leverage than the shoulder mount, especially when you only have one hand on the weapon.

Operating an AR-15 one-handed is much easier than a pump-action shotgun for several reasons, not the least of which is that the AR-15 is a semi-automatic firearm while the pump action shotgun requires manual operation. Imagine driving with only your dominant hand. Would you prefer an automatic transmission or a stick shift? The AR-15 will also be much lighter in most cases and hold many more rounds. This means less one-handed reloading, which is hugely beneficial.

Recoil management is another significant issue when you’re shooting a long gun one-handed. Without question, the AR-15 chambered in .223 is going to have much less recoil than a 12-gauge shotgun, making the AR significantly easier to control.

Working the action on a pump gun one-handed is quite challenging and probably won’t happen very quickly. Ideally, you could find a rigid object with an approximate 90-degree angle—the corner of a wall, a desk, the tailgate of a pickup, etc.—to press the forend against. This will allow you to force the action rearward (open) in order to eject the expended shell. Then hooking the rearmost portion of the forend against that same object would allow you to close the action, chambering the next round. If the environment you’re in doesn’t provide anything on which to hook the forend, you can work the action one-handed. This is even more difficult than using an object to work the action, but with sufficient practice, it could be an option.
Obviously, practice this with an empty gun.

One way to work the action of a pump shotgun one-handed is to first tuck the stock under your arm, clamping it between your inner arm and torso. Once the shotgun is secured in this manner, slide your palm under the triggerguard and grab hold of the bottom of the receiver. Pull the shotgun further toward you and clamp your arm higher on the stock. From there, you should have sufficient leverage to open then close the action. Unfortunately, you will need to repeat this process after every shot.

Reloading an AR-15 one-handed begins simply enough by depressing the magazine release and allowing the empty magazine to fall to the ground. From there, you can either take a knee or remain standing but you’ll want to invert the rifle so the magazine well is oriented upward and support the front of the rifle either between your knees (standing) or on the ground (kneeling). In either case, having the AR-15 slung will help support its weight. Next, retrieve a fresh magazine and insert it firmly into the magazine well. Slap the bolt catch with your palm to chamber a round. Achieve a proper firing grip and rotate the AR right side up to reengage. This procedure can also be used when there is an object upon which to rest the front of the rifle. 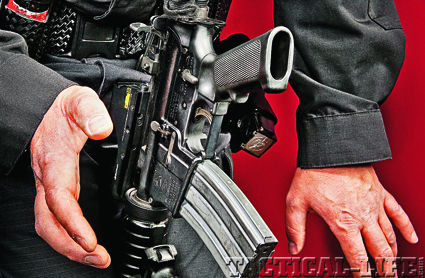 To speed-reload an AR, brace the upper receiver between your knees and use your palm to depress the bolt release.

When your shotgun is empty and your support hand is non-functional, you can use the close-quarter hold to load. Load the first shell through the ejection port, then close the action so you can shoot if necessary. From there, flip the shotgun over and load the magazine to capacity through the loading port. As with the AR-15, this procedure can be conducted either standing, with the barrel wedged between your knees or kneeling. Once your shotgun is loaded, acquire a shoulder mount or close-quarter hold and assess the situation.

With an AR-15, a malfunction requires you to first tap the magazine to ensure it is properly seated then cycle the bolt. This can be accomplished by inverting the rifle, supporting the upper receiver between your knees and hitting the bottom of the magazine with your palm. To cycle the bolt, grasp the charging handle and pull it as far as possible then release. Acquire a shooting grip and assume your preferred shooting position.
Of course, a malfunction with a pump- action shotgun requires you to simply work the action and try again.

As with any new skill, practice these techniques slowly and then gradually build up speed. “Dummy rounds” will enable you to safely develop a foundation in one-handed long gun operation. In this sterile environment, don’t be afraid to experiment. You may very well improve on the techniques presented here or come up with entirely different techniques that work better for you. When you make the transition to live fire, make sure there is an instructor present who can assist as needed. If you start to lose control of your firearm, the instructor should be in a position to immediately control the muzzle to ensure it remains pointed in a safe direction.

In a gunfight, you may very well find yourself with an injured arm that relegates you to shooting with only one hand. In such case, you might opt to transition to your handgun, especially if there is very little distance between you and your adversary. However, at an extended range, it will behoove you to stay in the fight with your long gun. The additional accuracy and enhanced firepower might come in real handy. 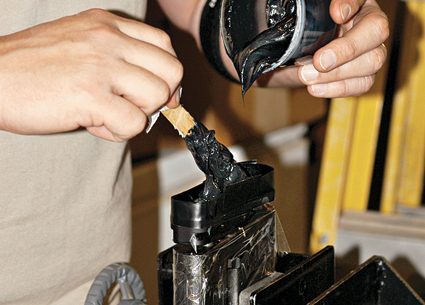 When your off-hand is injured, you can still shoot a long gun accurately from…