0
SHARES
692
VIEWS
Share on FacebookShare on Twitter
Stevens 350 Security 12 gauge is an economical but reliable scattergun for rough and
tough duty use. Seen here with Elzetta’s LED ZFL-M60 light, ammo pouch and sling from Spec-Ops Brand.

The shotgun, in one-iteration or another, has been a mainstay in law enforcement circles for decades. Although the shotgun may be set aside occasionally for a rifle/carbine, the knowledgeable law enforcement officer always knows when to transition back to the tried-and-true scattergun. Hopefully, today’s academies are not remiss in providing the training needed to allow the officer to make this transition, based on a mistaken belief that the scattergun is dead in the law enforcement world.
Perhaps that’s why I continue reviewing smoothbores, and why a recent offer to examine the Stevens 350 from Savage Arms was eagerly accepted. As I pulled the Stevens 350 from its box, I had a moment of déjà vu as I was struck by its kinship with another shotgun—the Ithaca Model 37. This isn’t a bad thing, since the Model 37 is a well-known and respected patrol shotgun, residing in numerous patrol cars and station lockers over the years. 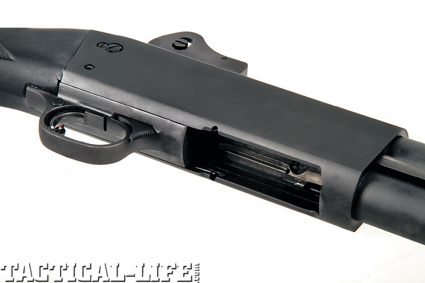 The 350 features bottom feed and ejection. This feature makes the 350 ambidextrous, with ejected shotshell hulls dropping at shooters’ feet rather than in their face.

The 350 is the newest rendition of the Stevens pump line that began with the Model 520, first offered in 1904. The Stevens pump shotgun line and the Ithaca 37 actually share a common ancestor: the venerable and prolific John M. Browning. In addition to sporting models and a variant intended for use in WWI, Stevens developed variants of the 520 for the law enforcement market, where it was well received. In 1927, Stevens, by then owned by Savage Arms, debuted the new Model 620 with a cosmetically improved exterior, while still retaining most of the 520 action. Many 520s and 620s were pressed into military service throughout WWII, but afterward the presence of Stevens in law enforcement gradually declined, though some samples could still be found in agencies. 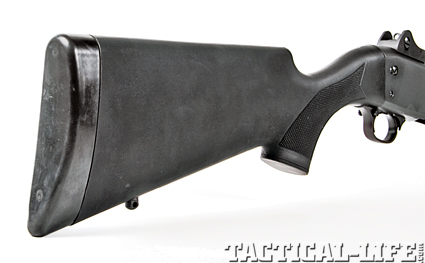 The Stevens 350 comes with a traditionally shaped synthetic buttstock with a ¾”-thick recoil pad that helps mitigate perceived recoil.

Gun Details
But now a Savage/Stevens law enforcement-style shotgun is back. In early 2010, Savage introduced the 350 pump gun. Built by Sun Machinery, the imported smoothbore shotgun was introduced in both field and defensive “Security” configurations. Featuring all-steel construction, the 350 feeds and ejects from underneath. This feature makes the 350 a great fit for right- and left-handed shooters with ejected shell hulls dropping at the shooter’s feet rather than in their faces.