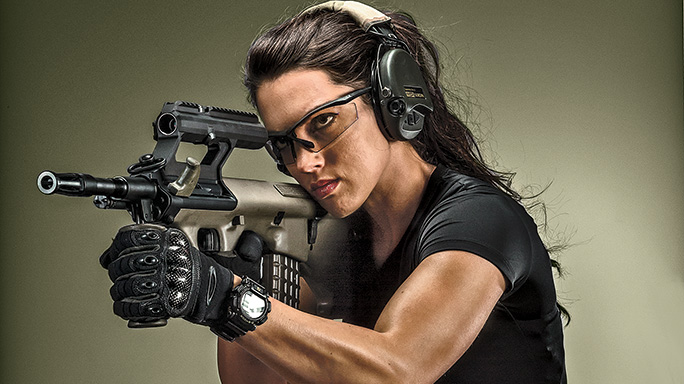 The new AUG/A3 M1 was designed to utilize several sighting options, including a built-in 1.5X optic (shown). During testing, everyone on the range was impressed with the bullpup’s handling, high-tech engineering and accurate results.
Comment(s)

When I tested the first U.S.-made AUG back in 2008, I was impressed because Steyr Arms was able to replicate the quality and feel of one of the rifles I have in my heart—the Austrian-made AUG. Today, in 2015, I am even more impressed with the American-made Steyr AUG/A3 M1, as the company has even improved on its European brother.

Why? Well, I have been shooting Austrian AUGs for more than 30 years, and I simply can’t think of a better overall rifle. Nothing is perfect, including the Austrian AUG, as it had a less-than-perfect trigger and required unconventional reloads thanks to its bullpup configuration. But even though those two little issues had been polished over the years in Austria, and they have been finally corrected by the American branch of Steyr Arms. Now, after installing the optional Hybrid Trigger Module and addressing the bullpup’s handling nuisances, Steyr has made what many will consider the best AUG ever.

In the early 1970s, Steyr Mannlicher developed the AUG (Armee Universal Gewehr, or “universal army rifle”), a 5.56mm NATO bullpup rifle. The AUG was selected and adopted by the Austrian Army as the StG 77 (Sturmgewehr 77) in 1977. The AUG bullpup was a huge commercial success. In its original configuration, it was adopted by the armed forces of more than 35 countries around the world.

Due to restrictive regulations back in the late 1980s, bringing Austrian AUGs into the U.S. became increasingly difficult. Eventually, in 1989, it became impossible. After a short period in 1997 in which Steyr and GSI joined forces and bypassed the 1994 Federal Assault Weapons Ban to bring 3,000 “legal AUGs” whose military features had been removed, no more Austrian AUGs ever made it into the U.S. again.

Then Steyr decided to begin building them in the U.S. But the actual undertaking was much more complex than as originally planned. The first try was a rather unsuccessful one that ended up with new management at Steyr U.S. and a U.S. company manufacturing AUG clones. I‘m not authorized to disclose the details of this operation, but it could well make a script for a spy movie. The second attempt was also unsuccessful. Steyr U.S. partnered with Sabre Defence, whose state-of-the-art manufacturing facility could build the high-quality AUG. But Sabre ran into problems with State Department, ending the output of the ultra-accurate American-made AUGs abruptly in 2009.

But Steyr never gave up. The third attempt was successful. Now high-quality AUGs are made in Bessemer, Alabama. For American shooters, this long road to excellence has brought the best U.S.-made AUG and one of the top, if not the best, battle rifles ever.

Steyr Arms offers three AUG variants. The first of the family is the AUG/A3 SA, a semi-automatic version of the AUG battle rifle. It features a Picatinny top rail and feeds from Steyr’s translucent polymer magazines. The second variant, the AUG/A3 SA NATO, as its name implies, can utilize standard 5.56mm NATO magazines. The new AUG/A3 M1 is available with a short Picatinny top rail, a longer, slightly taller rail for different sights and optics, or an integrated 1.5X or 3X optic.

I recently tested a version of the AUG/A3 M1 with an integral 1.5X optic, which is exceptionally bright and clear. According to Alexandria Maltezo of OATH Ammo, it’s “the clearest scope I’ve seen on any carbine,” and the sight is positioned 1.95 inches over the stock comb for a solid cheekweld. The new turret design requires a simple coin or flat screwdriver to make windage and elevation changes.

For those who prefer a variable-power scope or a red dot paired with a 3X magnifier, the taller rail available for the AUG/A3 M1 was designed with 16 numbered slots, extending 2.57 inches back from the receiver and sitting 0.82 inches over the stock comb.

The short rail was created for the minimalist who just requires an Aimpoint Micro T-2, a CompM4 or a simple red-dot sight. This rail has 11 slots and ends at the back of the receiver. It’s positioned only 0.44 inches above the comb.

The rails and sights on the AUG/A3 M1 are easily interchangeable via three base screws that thread from the underside of the top of the receiver. The receiver was also updated to replace the permanently affixed front sling swivel with a Vltor quick-detach sling swivel; this makes it fast and easy for users to attach or remove a two-point sling. Users of single-point slings can remove the front sling swivel entirely, if so desired.

The receiver itself is an Eloxal-coated aircraft-grade aluminium piece of art, and the gas system is adjustable. The short-stroke piston operating system of the AUG/A3 M1 runs exceptionally cleaner by nature because all of the firing gases vents out of the front of the rifle. The AUG’s opposing stainless steel guide rods, affixed to the bolt carrier, glide effortlessly inside the receiver for unparalleled smoothness in operation as well as exceptional reliability. Dual gas-adjustment settings ensure the AUG/A3 M1 will operate in the most adverse conditions.

Steyr built the very distinctive stock from fiberglass-reinforced polymer. To add to the new options available, Steyr is now offering the AUG/A3 M1 in matte black, OD green and MUD, similar to FDE.

I fully understand that some shooters like to have myriad aftermarket parts and customizing options for their carbines. However, in my opinion, the U.S.-made AUG/A3 needs very little in the extras department. It comes from the factory with all the classic features and benefits that established it as the pinnacle of modern rifle design, including expedited disassembly as well as simple conversion to left-hand operation, which requires replacement of the standard bolt with the optional left-eject bolt and swapping the ejection port cover.

Especially impressive on the AUG/A3 M1 is the quick-change barrel with its collapsible foregrip. You can swap out the barrel assembly in just a few seconds by pressing a side release. Don’t ask me how it accomplishes this, but the AUG/A3 M1 will hold its zero after swapping out the barrel.

Speaking of barrels, the Steyr AUG/A3 M1 comes with a 16-inch, cold-hammer-forged barrel. It features six-groove, 1-in-9-inch, right-hand twist rifling. But, if you’d like another barrel length, there are more options available on the market. Those options include 18-, 20- and 24-inch pipes. There’s even a 9mm conversion kit.

A3 On the Range

Steyr has always been synonymous with mythical accuracy in my mind, and this one is no different. I’ve shot incredible groups with my old AUG. The AUG/A3 M1, with its U.S.-made cold-hammer-forged barrel, proved to be just as accurate.

The secret here is a combination of the high-quality barrel and the new Hybrid Trigger Module available as an option from Steyr Arms. The standard combat trigger is a good one for a battle rifle. However, the Hybrid Trigger Module is simply mind blowing. This enhancement cuts the trigger pull nearly in half; it goes from around 8 pounds to a very comfy 5.19 pounds on average. It also brings a completely different feel to the AUG with its smooth take-up and a crisp break. This trigger option is a must for me.

The new Steyr proved itself on the range and produced some impressive sub-MOA groups with most of the test ammo. Shooting such sub-MOA groups with a 16-inch-barreled carbine is impressive. With the 16-inch barrel, you can expect five-shot groups of 1.5 MOA at 100 yards on average with military-grade ammunition.

And when you’re shooting match-grade ammo, you can expect sub-MOA groups. It does not get much better than this from such a short barrel. If you consider the AUG’s overall length, it may be the most accurate military carbine measuring less than 29 inches long.

With the AUG/A3 M1, you can quickly switch barrels and sights while remaining super accurate. The Steyr AUG/A3 M1 should become a bestseller in a tactical market that’s saturated with M4 clones. It’s super accurate, configurable and incredibly cool. 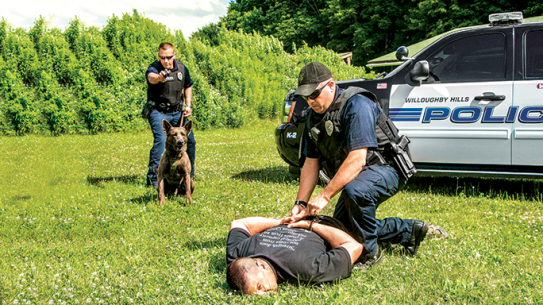 Any one of these errors could result in tragedy for today’s LEOs!