The Steyr AUG is one of those rifles that you either love or hate. Traditionalists tend to dismiss it as ungainly while those who are willing to keep an open mind come to realize the genius behind the design. For several years, Steyr has been struggling to bring the AUG back to the US market. However, several changes in management and ownership, along with battling the regulatory issues delayed its reintroduction until mid-2009. The good news is that the all-new Steyr AUG is now in US production and shipping to a dealer near you. In order to accomplish this, the new rifles are made in the United States with Sabre Defense making most of the components at their facility. Sabre is known for exceptional quality and Steyr could not have chosen a better partner. 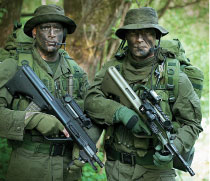 The AUG was first produced in the late 1970s and was adopted as the main battle rifle by the Austrian Army as well as a host of other countries. In the late 1980s, much to the dismay of the M16 crowd, the United States Customs Service purchased some 1,800 AUGs. Customs agents who were spending a great deal of time in planes, helicopters, and boats chasing smugglers and drug runners needed a compact long gun in a rifle caliber. The AUG supplemented, and in some cases replaced, the 9mm MP5 as the long gun of choice.

Within the Customs community, the AUG met with mixed success. Some agents rejected it out of hand favoring the more traditional M16 platform while others took the time to learn the rifle and realized the benefits of the design. My first experience with the AUG was in 1995 when I attended a Customs SRT class at Fort Benning, Georgia. I was impressed with the compact design, the integral optics, and how controllable it was.  However, time did not allow me to fully understand the rifle and appreciate how solid the design was.

Gun Details
I recently received a new production AUG from Steyr for this evaluation. In many ways, the AUG is as revolutionary to the rifle world as the Glock is to the semi-autopistol. The more I came to understand the design features, the more this statement rang true. As with the Glock, when the AUG was introduced, it represented several quantum leaps in design and materials. The rifle has a polymer stock and the modular design is simple to disassemble, easy to maintain, and requires no armory tools to replace major parts. Sound familiar? Obviously, Gaston Glock is not the only genius from Austria.