0
SHARES
22
VIEWS
Share on FacebookShare on Twitter
Made in America, Steyr’s new AUG/A3 NATO rifle accepts any M16/AR-15 mag. Equally new is the AUG’s forward rail that replaces the standard grip to accept any foregrip including the GripPod—seen here with SureFire’s L72 Laser and G2 Tactical Light, along with the Aimpoint Comp M4 and ARMS L17 folding open sights..

Bullpup rifles are nothing new, having been around since World War I when France fielded the earliest conceptual self-loading rifle of this ilk, the “Faucoun.” Great Britain designed the EM1 and EM2 bullpup rifles after World War II, and during the late 1960’s experimented with both AR-18 and Stoner 63 bullpup conversions prior to finally adopting what is today known as the L85A2 “Improved.” Then there is the French FAMAS, the Israeli Tavor 21, the CIS 21 and many others… but nothing has ever compared with the bullpup rifle Austria’s Steyr-Daimler-Puch (now Steyr-Mannlicher) had up its sleeve. 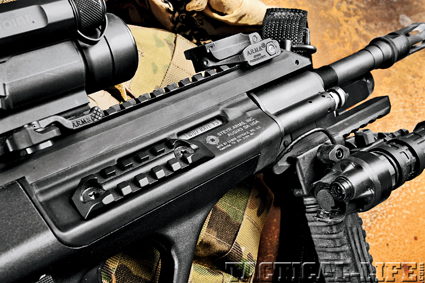 In addition to the AUG/A3’s full-length top rail, the rifle also comes with a short, angled side rail on which a light or laser can be mounted.

With development beginning in the early 1970s, the 5.56x45mm NATO Universal Infantrie Waffen (Universal Infantry Weapon, or UIW) soon came to be known as the Armee Universal Gewehr (Army Universal Rifle, or AUG). With a 20-inch barrel, the AUG’s 31.1-inch overall length was complimented by a totally modular system that remains one of the most ergonomic rifles in the world. Using a receiver cast from lightweight aircraft alloy and a bolt group not unlike that of the AR-18, the AUG also uses a dual recoil spring system reminiscent of the AR-18. The AUG’s recoil springs, however, are captive inside hollow operating rods. The short-stroke (tappet) gas piston impinges on the front end of the right operating rod and the end of the left rod is in contact with the rifle’s non-reciprocating cocking handle (it is also used to clean the gas cylinder). Two long steel pins in the back of the stock provide compression against the recoil spring plugs to return the bolt group forward. On the tip of the original cocking handle was a button that allowed the handle to be used as a forward assist. 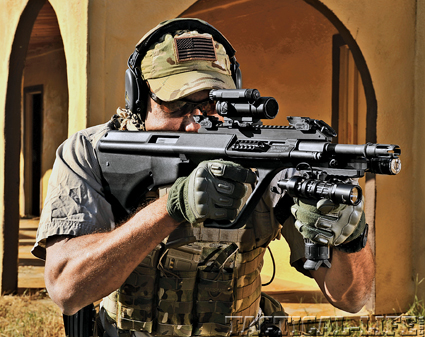 As with all Steyr AUG rifles, the AUG/A3 NATO is ergonomic, reliable and accurate, and is now 21st century ready.

Rotating just 22.5 degrees to lock and unlock, the bolt of the AUG operates by a cam pin connecting it to the bolt carrier. To prevent the bolt from prematurely rotating during the feeding cycle is a special spring-loaded collar with splines that ride forward between the locking lugs of the bolt. As the bolt enters the barrel extension, the opposing lugs of the extension force back the splines, freeing the bolt to rotate into battery at the last instant.