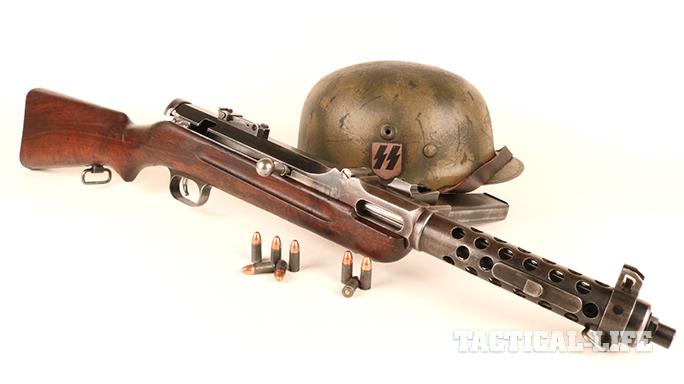 1 of 11
Photo by Cassie Dabbs
Steyr MP34
With its graceful curves and meticulous machining, the Steyr MP34 represents a perfect blend of old-world craftsmanship and state-of-the-art technology before WWII broke out across Europe.

2 of 11
Photo by Cassie Dabbs
Steyr MP34
The MP34’s 20- and 32-round box magazines were loaded from the left side of the receiver, and the magazine well had an integral guide for reloads with stripper clips. 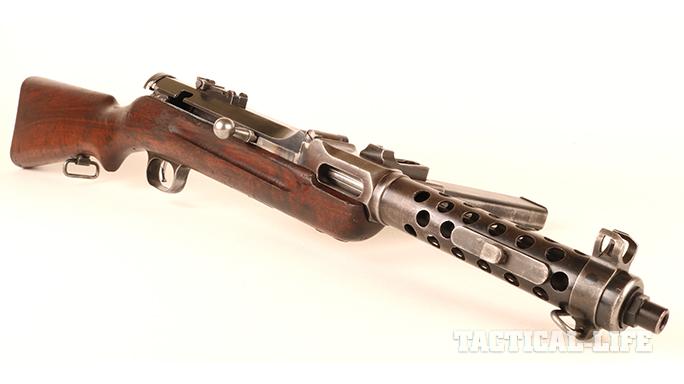 3 of 11
Photo by Cassie Dabbs
Steyr MP34
The adjustable rear sight was graduated rather optimistically for shooting out to 500 meters, and spent casings were ejected out of the right side of the MP34’s receiver. 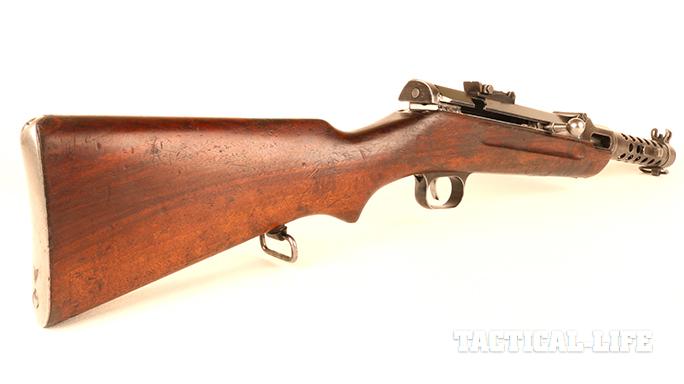 4 of 11
Photo by Cassie Dabbs
Steyr MP34
Shallow grooves on each side of the walnut stock provided a position for the shooter’s support hand, and a cutout for the charging handle on the right side of the steel receiver served as a safety. 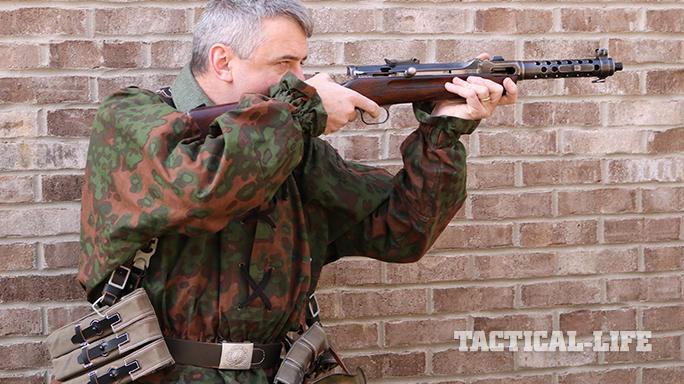 5 of 11
Photo by Cassie Dabbs
Steyr MP34 9
The heavy steel barrel jacket prevented the support hand from getting burned, and its sheer mass also helped keep the gun on target, even during long bursts of fire. 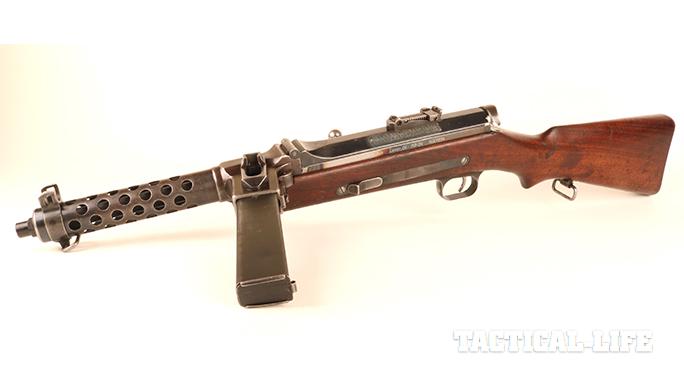 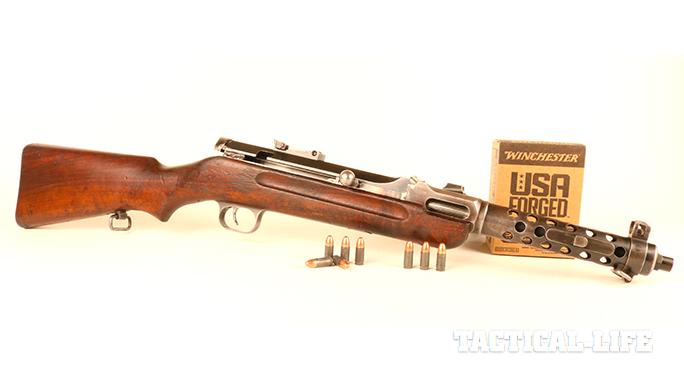 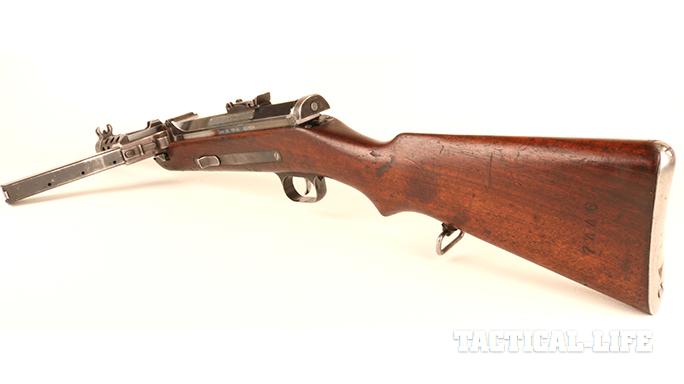 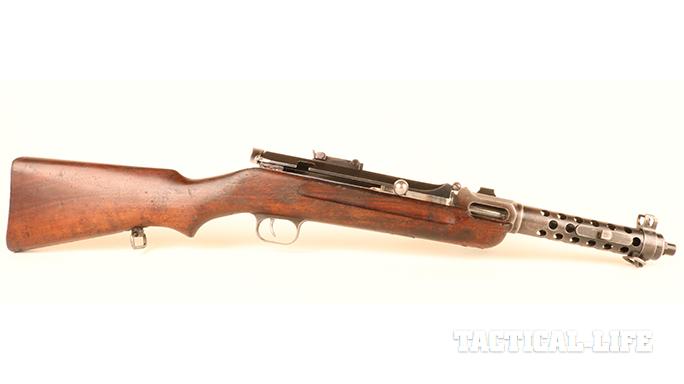 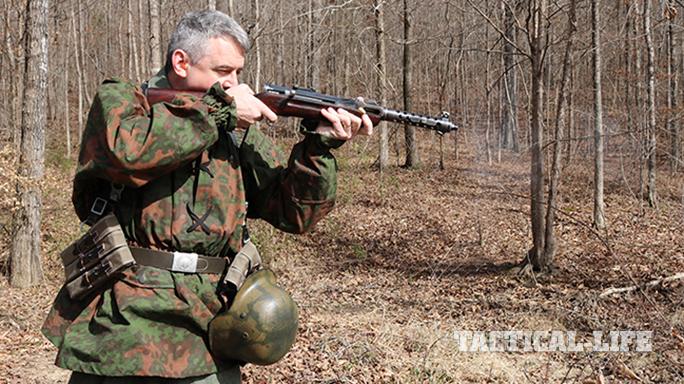 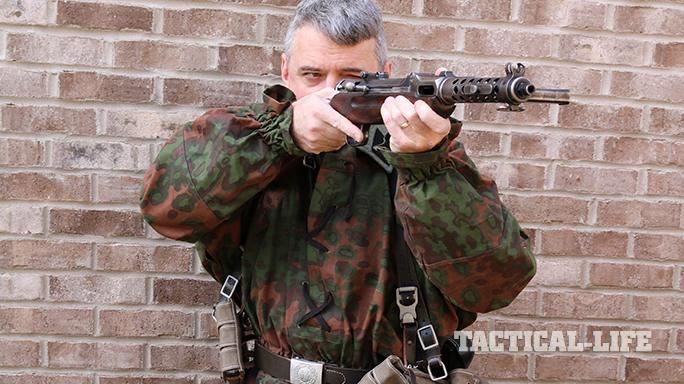 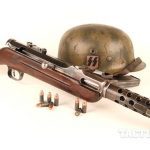 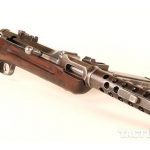 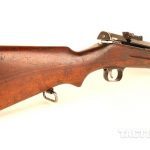 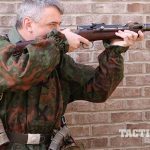 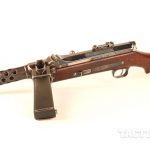 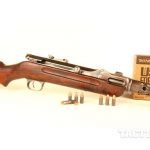 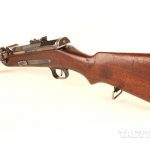 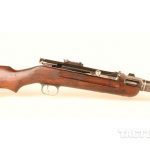 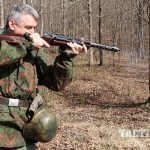 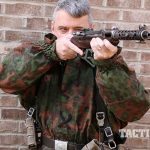 Weapons manufacturing is high art in the Information Age.

Advances in automation and computer-controlled machinery sees produced in breathtaking quantities while maintaining meticulous standards of quality. When combined with modern polymer science, the result is the likes of the M4, Steyr AUG, IWI Tavor and FN F2000. However, the modern state of the art was attained only after generations of mechanical evolution. Hold that thought.

Historians debate the onset and duration of the Industrial Revolution. Most agree that it occurred between 1760 and 1840. However, the limits of the era were, of their nature, fairly nebulous. The Industrial Revolution was the most seminal cultural event in history since the domestication of animals and the development of agriculture. By harnessing steam and water power, scientists and engineers used this energy to build things en masse. Although textiles predominantly drove economies, the industrialization of chemistry, metallurgy and machine tools sparked unprecedented advances in engineering technology. And when technology progressed to the point where we might manufacture mechanical contrivances precisely and in quantity, we began building implements with which to kill each other. As measured by sheer volume of blood spilled, World War I was the planet’s sordid introduction to war on an industrial scale.

WWI claimed the lives of 9 million soldiers and another 6 million civilians. During two weeks of the Ludendorff Offensive in 1918, the Germans lost 303,450 casualties. In April of 1918, the Kaiser’s army lost 120,000 troops in less than a month. For the first time in history, man really perfected the art of killing in quantity.

Although small arms and airplanes carry the sex appeal, the cannon was the true killer on the WWI battlefield. About 70 percent of combat deaths in WWI were the result of artillery or bombs. Almost 30 percent came from bullets. About 1 percent died on the cold steel of the bayonet. However, because a soldier’s individual weapon is such an emotionally critical aspect of the combat experience, all of the nations involved strained to produce the best small arms they could afford. And here is where the Germans led the way.

Birth Of The SMG

The Italians first broke ground with their Villar Perosa. However, they typically mounted these tidy little magazine-fed 9mm submachine guns in tandem and used them as air-to-air weapons. The Germans fielded the first practical man-portable submachine gun with the MP18, a product of the Rheinmetall, based in Dusseldorf.

The MP18 fired from the open bolt and fed from the 32-round snail-drum magazine of the P08 Artillery Luger. This handy little machine gun gave German Sturmtruppen unprecedented firepower during the extremely close fighting that characterized the fetid trench warfare of the Western Front during WWI. The MP18 was built around a tubular steel receiver that was meticulously machined into its final form using machines that were likely driven by steam.

The MP18 eventually evolved into the improved MP28. There were other differences. The primary among them was the MP28’s use of double-column box magazines in place of the overly complicated snail drum. During the interwar years of the 1920s and 1930s, military gun building really reached a new apogee.

“Apogee” is an astronomical term that means the highest point along a continuous trajectory. As it relates to mechanical contrivances, it implies the upper limit of industrial refinement. With submachine guns, the general consensus is that the Steyr MP34 occupies this rarefied position.

Restrictions in the 1919 Treaty of Versailles precluded the Germans from developing man-portable automatic weapons. Specifically, German martial firearms could not possess a barrel longer than 4 inches or a magazine capacity of more than eight rounds. This pretty much restricted the Germans of the Weimar Republic to P08 Parabellum pistols and little else.

Eager to expand the state of the art while perhaps preparing for the coming next World War, Rheinmetall acquired the Swiss Solothurn weapons factory in 1929 and began developing the S1-100, which would later become the MP34.

Although ill-suited for mass production, Solothurn did a crack job of developing and prototyping the gun. Rheinmetall subsequently bought a controlling interest in Steyr in Austria. At the outset of WWI, Steyr employed 15,000 workers and produced 4,000 rifles per day. And, unlike Solothurn, Steyr used the most advanced tooling and techniques of the time. This made perfectly situated to produce military weapons en masse.

The MP34 fell into the sweet spot. At the time of its production, old-world craftsmanship still drove gun building, though modern mass-production techniques ensured a prodigious output. The result is arguably the most meticulously well-built military weapon in history.

What Makes It So Great?

The MP34 was a blowback-operated, select-fire submachine gun. It was alternately chambered for the 9x19mm Parabellum, 9x23mm Steyr and 9x25mm Mauser cartridges. A smattering intended predominantly for South American markets even fired John Browning’s .45 ACP round. Most of the guns fired Georg Luger’s 9x19mm round, however.

The MP34 fed from the left side via 20- or 32-round magazines that canted slightly forward for optimal feeding geometry. A sliding switch on the left side of the receiver served as a selector. The generously perforated heavy steel barrel shroud sported a bayonet lug. The magazine housing incorporated a novel device where an empty magazine could be locked in place 90 degrees out from the typical feeding geometry. So oriented, ammunition could be quickly loaded into an empty magazine by way of eight-round stripper clips from above.

The bolt of the MP34 sprouted a generous rattail out its back, which telescoped into a recoil spring assembly in the buttstock. A beautifully machined top cover pivoted upward to grant access to the gun’s entrails. Big chunks of forged steel accounted for the exhaustive machining. That machining included everything about the gun, even the magazine well and buttplate.

The rigid cocking handle reciprocated with the bolt and locked into a safety slot in the manner of the later MP40 when necessary. The sights were fully hooded or otherwise well protected up front, and the rear sight was meticulously adjustable for elevation. The gun cycled at about 600 rpm on full-auto and weighed 9.9 pounds fully loaded. Turning the barrel out with a wrench facilitated easy replacement or caliber changes.

From the outset of World War II, the Germans never had enough weapons to go around, especially when it came to submachine guns. The Nazis embraced the concept of the pistol-caliber automatic weapon while drawing guns from various eclectic sources. Nowhere was that more overtly manifest than with the Waffen SS.

Meaning “armed SS,” the Waffen SS was the military wing of the party’s Schutzstaffel organization. Developed as an offshoot of Adolf Hitler’s personal bodyguard detail, the SS was expected, at least early in the war, to be racially pure and physically near perfect—or perfect in the eyes of Hitler and the Nazis. As the war took a downturn for the Nazis, they eventually accepted some “non-Aryan” groups of people into their ranks. By war’s end, the SS was almost completely unrecognizable from its pre-war origins.

Before the Waffen SS proved itself on the battlefield, its members had to scramble for small arms. As a result, the SS was the most prolific user of the MP34 during WWII. The gun figured prominently in the early blitzkrieg campaign across France and the Low Countries. As the war ground on, it became obvious that the exigencies of total war were incompatible with the lofty standards of workmanship demanded of the MP34. By 1945, the MP34 was no longer found in frontline units, having been supplanted by the MP40 submachine gun and the truly advanced MP44 (or StG 44) assault rifle.

The MP34 is heavy, but its mass means the gun is remarkably controllable. It’s pretty easy to keep the gun on target even during long bursts of fire. Firing single shots, the gun remains delightfully accurate out to the effective range of the 9mm Parabellum cartridge. So long as I did my part with a test sample, I could keep my rounds on a man-sized target while firing in semi-auto until I got tired of it.

The Steyr MP34 is also more maneuverable at close ranges and indoors than almost any modern rifle-caliber assault rifle. Magazines last a long time as well, given the gun’s sedate rate of fire. Singles and doubles are easy with a disciplined trigger finger. While the gun fires from an open bolt, the bolt closes after the last round fires, so the manual of arms involves manually locking the bolt to the rear before swapping out the 20- or 32-round magazines.

The Nazis make the world’s best cinematic villains for good reason. Amidst a sea of morally corrupt scoundrels populating Earth’s long, sordid and bloody history, few can compete with Hitler’s henchmen for unfiltered racist impiety. For all of their depravity, however, German engineers contrived some of the most interesting and effective weapons in World War II.

Some scholar lost to history once opined that art was where you found it. As it relates to small arms, it’s not a great logical leap to consider the MP34 a seminal form of mechanical art. Sporting graceful curves and a design philosophy of using three parts when one might otherwise suffice, the MP34 is remarkably gorgeous and darkly effective. In the hands of the worst bad guys in modern history, this classic Steyr submachine gun earns its top spot in military weapons history.

Finally, I’d like to give special thanks to World War Supply for the period replica gear used in the production of this article. It wouldn’t have been the same without it.

This article is from the 2018 issue of “Military Surplus” magazine. To order a copy and subscribe, visit outdoorgroupstore.com. 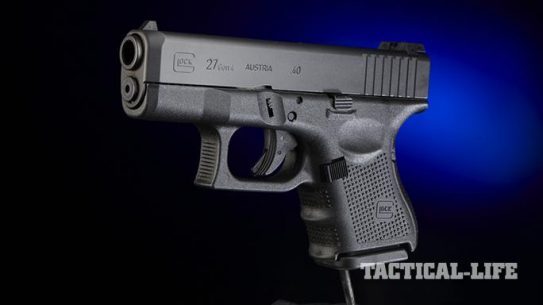