The Bureau of Justice Statistics suggests that, by modest estimates, there are over 17,900 agencies in America employing over 765,000 sworn officers—that’s just state and local agencies. If we estimate that only 10 percent of those agencies have tactical teams, that’s 1,790 teams. Next, consider that, aside from those teams and the officers they employ, there are throngs of individual officers who have enough interest and investment in their duties and personal safety to purchase their own long guns for duty use. Add to that the military veterans with experience and interest in rifles who are reentering the civilian world; enthusiasts and consumers outside of law enforcement who have tactical interests and concerns; and those involved in shooting sports such as 3-Gun competition and you’ve got a huge market for serious tactical rifles. It’s also doubtful that anyone would argue against AR-15-platform rifles as the most popular tactical long guns around. 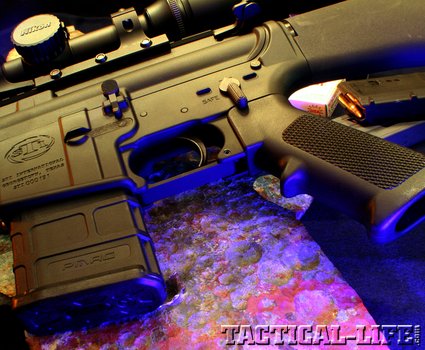 The Tactical Rifle’s upper and lower receivers are paired together by captured crosspins. The left side of the magazine well bears the STI logo and company name.

There’s no way to predict how many AR-15s the market will support, but I’m personally familiar with at least one popular manufacturer that has all but suspended its production of other firearms (since just prior to the 2008 presidential elections), just to keep up with orders for its wildly popular semi-auto black rifles.

Not surprisingly, a few years ago STI, a company with roots in shooting competition, began offering AR-15 rifles: the Competition Rifle and the Tactical Rifle. It wouldn’t be completely forthright of me to not admit that I’m a fan of STI and that my interest was first piqued by STI’s 2011 and 1911 pistols, including the Tactical 4.15 that I’ve carried in my duty holster and off-duty for the past four years. 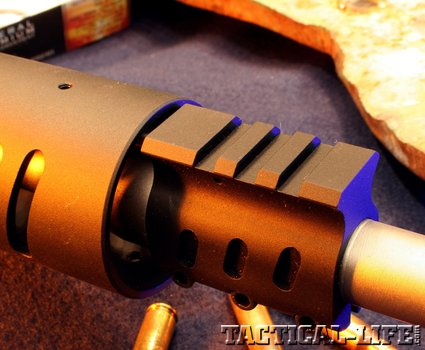 The STI Valkyrie Tactical gas block is lightweight and concealed under the handguard and has matching slots for cosmetic reasons and a Picatinny rail on top.

The STI Tactical Rifle’s upper receiver is forged 7075-T6 aluminum, lower is cast, and paired together by captured crosspins. The left side of the magazine well bears the STI logo and company name. The barrel, a 410 stainless steel forging, measures 16 inches and has a 1-in-8-inch twist rate and 1/2×28 threading for the Nordic Components Tactical compensator. The barrel is magnetic particle tested, button-broached and stress-relieved. M4-style ramps guide rounds into the 5.56mm chamber, which, of course, accommodates both the higher chamber pressure of the 5.56mm round and the lower pressure of the .223. The staking on the gas key looked a bit modest to me, but I’ve never encountered a problem with them in any of the STI rifles I’ve tested—this one being the third. Headspacing looked just fine, and the receivers were mated with no slop whatsoever. STI is smart enough to employ a trigger group from JP Enterprises—there’s never shame in outsourcing for top-notch components. 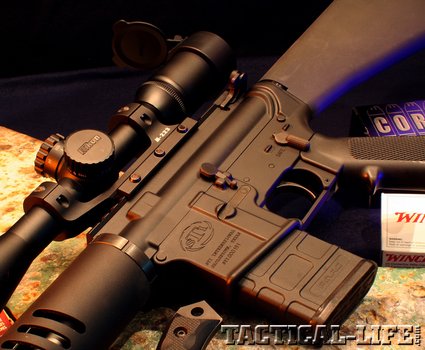 The free-floated handguard is the aforementioned custom STI Valkyrie short unit, drilled top and bottom at 1-inch intervals to accept JP rails. Slots (which also serve as vents to cool the barrel) with half-inch centers are cut into the side of the handguard so that customers can use T-nuts to mount additional rails in any configuration—the slots also make for a handguard that is aesthetically pleasing. At the front of the handguard is an exclusive STI Valkyrie Tactical gas block that bears matching slots and a Picatinny rail on top. An AR-15-style fixed buttstock with a trapdoor in the butt and a storage compartment is utilized, though any aftermarket AR-15 buttstock could be fit to the rifle. The Tactical Rifle’s pistol grip is standard mil-spec. The rifle is finished in black Teflon coating over hardcoat anodizing for durability and corrosion resistance. The fit and finish was superb throughout.

To test the STI Tactical Rifle, we benched the gun on a sandbag on top of my collapsible bench, and from 100 yards, fired five-shot groups at 3-inch, bullseye targets. Dustin Hendrix, a SWAT officer, firearms instructor, and Long Range Rifle Operator, was on hand to help.

For directing fire, we mounted Nikon’s M-223 3-12x42SF Matte Rapid Action Turret Nikoplex Riflescope, which is designed specifically for the AR-15 and, more specifically, the 55-grain .223/5.56mm round. With a one-piece main body tube, this variant of the M-223 has a side-focus parallax adjustment and Rapid Action Turret technology, which allow the shooter to adjust elevation from 50 to 600 yards with one revolution—quite a valuable feature for those of us who are not trained snipers. Nitrogen-filled and O-ring sealed, the scope is waterproof, fog-proof and shockproof. Nikon engineered the entire optical system to provide the shooter with a bright, sharp, flat sight picture and light transmission up to its theoretical maximum of 95 percent. A large ocular lens delivers a bright, high-resolution sight picture with 4x zoom range and 4 inches of constant, noncritical eye relief. Magnification reference numbers are viewable from the shooter’s position. 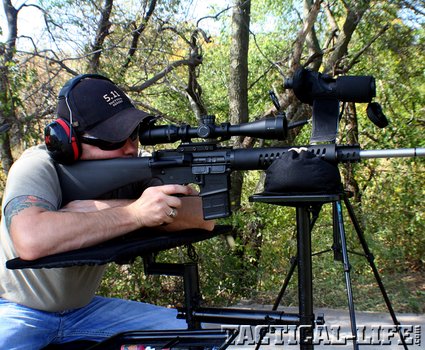 As luck would have it, we found ourselves at the range on a warm, 87-degree October day; however, we were bucking 21-mile-per-hour wind gusts. I first set up a silhouette target to determine where the rounds were impacting on paper. After about 15 rounds, I was about dialed in perfectly and began testing the weapon’s inherent accuracy potential. Shifting to the 3-inch targets, the largest group of the day, measuring 1.63 inches, came from Winchester’s 55-grain FMJ rounds. We tightened this up to 1.5 inches with Federal’s Premium 55-grain Barnes Triple-Shock loads. The tightest pattern of the day measured just an inch center-to-center and came from CorBon’s 55-grain FMJs.

To record average velocities, I used a Competition Electronics ProChrono Pal. The ProChrono Pal was easily assembled in minutes, and each plastic diffuser was one flexible piece, as opposed to flimsy, separate, interlocking pieces like those of my previous chronograph, which routinely flew apart. I admit that the first time I used the ProChrono Pal, I didn’t even bother reading the instructions. Fitting a few parts together, I switched on the chronograph and began shooting. The chronograph had a very large shooting area of sensitivity and none of the temperamental problems in obtaining readings that I’d encountered with my old chrono.

Functioning was smooth, and the ergonomics and controls were standard AR-15 fare. The trigger was outstanding, with about a millimeter of take-up before substantial resistance was felt and a clean break at 3.5 pounds with no discernible overtravel. Dustin even commented that the crisp, light break of the trigger so exceeded his expectations that it caused him to let loose a flyer—he anticipated a standard military trigger pull. A great trigger goes a long way toward making me like any rifle, but the familiar feel of the AR-15 platform coupled with the rifle’s flawless cycling throughout testing only served to solidify my satisfaction with the gun.

Not to make excuses, I felt the Tactical Rifle was capable of better accuracy than we achieved with our flimsy collapsible bench and stout wind gusts. Optimal conditions probably would have brought the groupings tighter still. Nonetheless, we easily achieved MOA precision.

STI has crafted a rifle for professionals and serious defensive shooters. The weapon is ergonomic, reliable and accurate with an exceptional fit and finish and would serve well for law enforcement, defensive or even recreational shooters. In our experience, the guns of STI have become synonymous with high-end quality in semi-production 2011s and 1911s, and now for AR-15 rifles. I know that at least one of my agency’s SWAT officers is carrying a rifle that is based on STI’s Tactical Rifle and accessorized to suit his tastes and needs. He reports outstanding performance after attending a rifle course with it and carrying the weapon for the past three years in a tactical operator role.

STI isn’t reinventing the wheel with the Tactical. Rather, it has taken a proven design and offered its own builds using top-shelf components, materials and fit and finish, providing out-of-the-box quality and performance. If you’re interested in either a 2011 or 1911 pistol or a rifle that’s a cut above the cookie-cutter AR-15, you need look no further than STI. For more information, visit stiguns.com or call 512-819-0656.