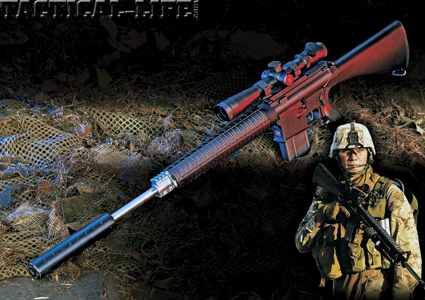 The AR-10A4’s National Match trigger and barrel make it a long-range tack-driving hammer when coupled with a Leupold Mark 4 3.5×10 LR/T M3 scope and an Advanced Armament Cyclone suppressor.

Most American “black rifle” enthusiasts be­­came such by exposure to the AR-15 or one of its civilian or military variants. Many shooters, early in their exposure to the AR-10, assume that the AR-10 is just a beefed-up AR-15 that can handle the 7.62x51mm NATO/.308 Winchester cartridge—when, in truth, it came first. But, just recently the AR-10 has come into its own.

ArmaLite has announced a limited run of AR-10A4s with two special upgrades. The Illinois-based company switched to a match-grade barrel and a National Match trigger to produce a heavy hitter with target-grade accuracy. This AR was a cooperative effort with RSR Group, one of the top firearms distributors in the United States. 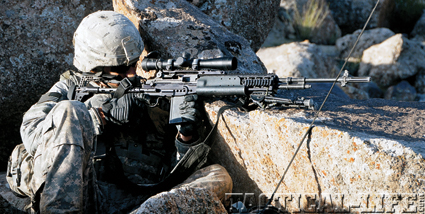 Modern variants of the M14 still see service in combat with special forces units in Iraq and Afghanistan.

Birth of the AR-10
The ArmaLite AR-10A4 BSNF (factory designation for AR-10A4 in black, with forward assist and National Match trigger) is destined to become a rarity due to its limited run, which isn’t anything new to those familiar with early AR-10 history. Hamstrung by a poor management decision in 1957, the AR-10 failed against the T44, the predecessor to the M14, in becoming the U.S. service rifle. To make matters worse, ArmaLite Fairchild sold off Stoner’s patent for the AR-15 to Colt’s Manufacturing for $75,000 and a small royalty in 1959. Export complications in Holland kept Artillerie Inrichtigen, to whom ArmaLite Fairchild had sold manufacturing rights for the AR-10, to building and shipping fewer than 10,000 AR-10 rifles.

What few rifles were shipped found service with Italy’s version of the Navy SEALs, as well as the Portugese and Sudanese military. But the story does not begin there. 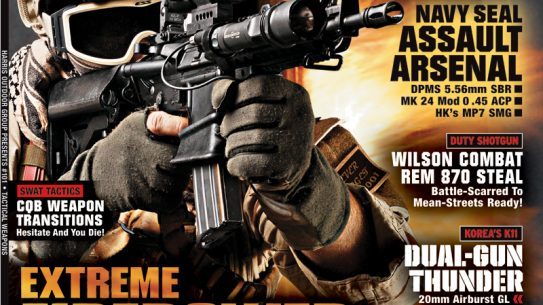