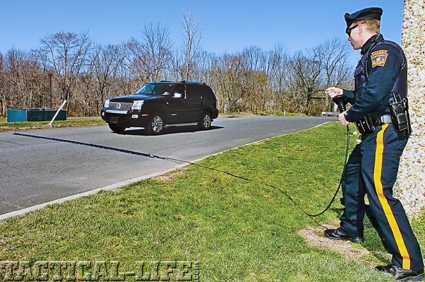 Spike strips are an asset and can often bring a high speed threat to an abrupt halt, if they can be deployed ahead of a vehicle.

Police pursuing a suspect at high speed has all the makings of a hit movie or exciting news clip. Often, these incidents receive national media attention. News programs break in with “Breaking story, police are in pursuit…” This overwhelming coverage has heightened the pursuit debate and has also added increased scrutiny about the reasons for a pursuit.

The bottom line: At any speed, a suspect who flagrantly disobeys a lawful order by the police to stop is a threat to public safety. Unfortunately, our lawsuit-happy and liability-conscious society and court rulings have forced police departments and their officers into an uncomfortable decision: pursue or not pursue?

Suspect
Mr. John Hill, a retired New Jersey police officer, wrote in an FBI bulletin, “One study shows that officers can use termination as an effective option to reduce the risks of pursuits. The study involved 146 jailed suspects involved as drivers in high-speed chases. Seventy percent said that they would have slowed down if police had terminated the pursuit or even backed off a short distance. Fifty-three percent responded that they were willing to run at all costs. Sixty-four percent believed they would not be caught. Seventy-one percent said that they were concerned for their own safety and only 62 percent said that they were concerned for the safety of others.” Those statistics show that 53% of fleeing suspects run at all costs and almost 40% don’t care who they hurt. Tough statistics for the family that gets caught in those suspects path.