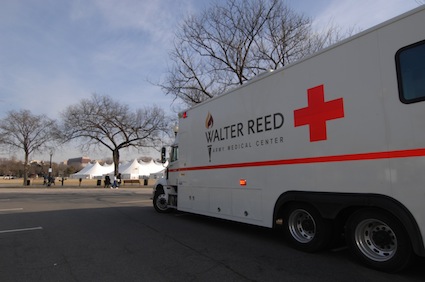 The storied Walter Reed Army hospital, where generations of American soldiers came to heal their wounds, will shut down in September, the Pentagon said Tuesday.

“Walter Reed is closing its doors on the 15th of September permanently after 102 years of service to the nation. For many of the staff members, it’s like losing your favorite uncle,” said Colonel Norvell Coots, calling the facility a national “icon.”

The closure is part of a reorganization of the country’s military medical services in the US capital approved in 2005, two years before a scandal that damaged the reputation of the famed hospital.
In February 2007, the Washington Post revealed that wounded soldiers, including amputees, treated at Walter Reed suffered from bureaucratic neglect and often wretched conditions.
The revelations led to the sacking of the head of the hospital and the then army secretary, Francis Harvey.

The closure of Walter Reed is “the largest medical restructuring ever undertaken in the military health system,” Vice Admiral John Mateczun, commander of medical services in the Washington region, told reporters.

Patients and staff members will move to a naval hospital in Bethesda, Maryland, just outside Washington, and to another military center at Fort Belvoir in Virginia.

The Bethesda facility, which will be named the Walter Reed National Military Medical Center, will have 345 beds, as well as space for 50 patients in intensive care units and 20 operating rooms. The Fort Belvoir site will host 120 beds, 10 beds for ICU patients and 10 operating rooms.
“There will be the same capacity that we have” now, Mateczun said.

During the summer months when fighting peaks in Afghanistan, about 20 wounded soldiers from Iraq and Afghanistan are evacuated to Walter Reed every week, he said.

Nearly 45,000 soldiers have been wounded in the wars in Iraq and Afghanistan, according to Pentagon.