TW: Lots of fierce fighting in Afghanistan. Both the Chairman of the Joint Chiefs, Admiral Mike Mullen, and our Commander in the field, General Stanley McChrystal are on record as needing the extra troops. President Obama seems on the fence on the issue, taking more time to study the situation. Do you think he’s wavering?
That’s the dumbest thing in the world, as far as I’m concerned. I mean, what kind of decision is there to be made? Do we want to lose the war, or do we not? So he’d better take his pick, he’d better make it quick, make his move now. Troops’ lives are on the line here. Not to mention, morale is taking a nosedive. It’s been what, three months? My Grandma could’ve made a call by now!

TW: If you were President would you back continuing operations with more troops?
If I were President, those troops would be on the way over there right now.

TW: We’ve heard that you’re going over there. When will that be?
I’ll be heading out to Afghanistan on December 6. I’m excited about getting boots-on-ground and seeing exactly what the situation is over there for myself. I can’t wait to get back with the troops, so I can give you a first-hand report. I was there last about four years ago. But speaking with my staff and officer friends who are returning from the war, nothing much has changed.

TW: You mentioned Somalia. We had a little success there last week. The story says American Commandos killed the top rebel commander in Somalia. He and some of his men were crossing the desert in two trucks, and our guys swept down and blew ’em up. What are the Commandos? Do we have lots of them?
What we call “Commandos” are really secret people—you don’t hear their branches broken down—and we do have a lot of them. But most of them are in Afghanistan. That’s the only way we’re going to win that war. It’s through intelligence, from the Commandos going in—Special Forces, or Special Ops or Marine Recon, or Navy SEALs, with units and teams embedded in those mountains in Afghanistan.

TW: Here’s a good story from the papers: A female African American Sergeant Major has been put in charge of training Army troops at Fort Jackson, SC. Command Sergeant Major Teresa King, 48 years old, she’s been made Commandant of the Drill Sergeant School at Fort Jackson. She’s evidently a hell of a soldier.
Bravo! I’ll tell you what, we’ve come a long way. Many sergeant majors in the Marine Corps are black. They make great warriors. African Americans and Hispanics have certainly taken their place in our armed forces, and they make great soldiers. I happen to know a few female Staff NCOs. Trust me, they are up to the job.

TW: In Iraq, while we’re pulling out as advertised, the fighting between the religious factions continues, with more suicide bombings. The other day they let the guy who threw a shoe at President Bush out of jail, and some people celebrated that. Can these people really handle the freedom we’ve handed them?
I think it’s time. I don’t know what else we can do for them. We’ve completely upgraded their infrastructure. The roads are good, the bridges are good, we’ve even built the sewage plants. So let’s get the hell out of that country now and let them stand on their own two feet. I’m afraid that the first thing President Obama did when he came in was to put down a date when we were leaving, which I think is one of the dumbest things anybody could have possibly done. Because if I’m a terrorist, I’m going to say, “No sense in worrying about it, I’ll just wait until the Americans are gone, and then we’ll take the situation under own control.”  Watch and see if I’m not right.

TW: How’s Lock N’ Load with R. Lee Ermey on The History Channel going?
Well, we finished the 13 episodes. It took five months, and I had only nine days off. It was day on, stay on, stay busy, and have fun! I think in our last count we shot in 29 different states. So it kept us really moving. We were on Army, Navy, Marine Corps and Air Force bases. We did them all.

TW: Is there a lot of preparation, writing and stuff?
There’s not a whole lot of writing, because we come up with much of it on the spot. But, there is a lot of research that goes into the process and we still have to make logistical arrangements. You can’t just take a film crew, and waltz onto the base, expecting the military to meet your schedule. Take the 155 Howitzer, for example. We can’t get shots of the 155 unless they’ve got a schedule for shooting the 155. They won’t set it up specifically for us. That costs a lot of money. We have to find out when they’ll be shooting the 155s and be able to get there at that time.

TW: Can you tell us about some of the equipment you’ve run into that you’re really excited about?
I’d like to do a show on the Osprey. It’s like an airplane/helicopter all in one. It’s been back on line now for a couple of years, so it’s just a case of getting our schedule on line with their schedule. They have those down at New River Air Station. The Osprey is the airplane that can rotate its wings up to where it’s a helicopter, taking off and landing like a helicopter. The Marine Corps has them. And the Marine Corps is replacing the CH46 helicopters with those. Now the CH46—one of its main uses has been for med-evacs. The Osprey can go in and carry about five times as many wounded on it as the CH46. And it’s really fast. After taking off like a helicopter, it rotates its wings and away it goes. Then to land, it just rotates its wings back like a helicopter and comes straight down. It can save a lot more lives. It’s in the field in the Marine Corps right now, and they have more in the pipeline. It’s basically for carrying supplies or the wounded.

TW: Did you get into any rifle shooting competitions this year?
I did indeed. I was at Camp Perry, Ohio, at the Nationals for five days, and I shot well. I learn something about shooting every time I shoot a rifle. An old Marine Corps buddy of mine, an armorer, First Sergeant Ghinger, built me a competition M1 Garand, so I was able to shoot that for the first time. It’s all match condition. I love it there, being with grass roots Americans. More people should get involved in competition shooting. They’re missing a lot of fun. And they can help us all by joining the NRA, too.

TW: What was your immediate reaction when you heard about the Fort Hood attack?
Why? Thirteen soldiers gunned down on American soil by an officer who was an American-born Muslim with a record of turning against his own country. How did he get past his commanders, other officers, his psychiatrists? I’ll tell you how. It was political correctness, looking the other way to avoid offending a Muslim. Nobody blew the whistle on this guy, and suddenly there he was, shouting, “Allahu Akbar,” Arabic for “God is Great,” and killing our people because he was a turncoat and nutcase to boot.

TW•:Do you think the ongoing investigation will provide any useful information?
I hope so. Somebody dropped the ball. We’ve got to learn something from this. The guy is said to have been in touch with terrorist-preaching clerics. If I had done that, the FBI would have been all over my butt!

TW: You’ve been on a lot of bases lately, filming your show, talking with troops. How do you feel about young people contemplating a military career now?
I’m involved with several youth groups, and I always tell young people that if they’re thinking about going into the military, they should go talk to all the recruiters. They should talk to everybody. Don’t just say, “Well, dad was in the Marine Corps, so I’m going into the Marines.” Go talk to each recruiter and find out which branch of the military is going to give them a good education, and good training, so that when they get out after four years, they’ll have a good resume built up. I have a nephew right now in Air Force Boot Camp. Jeffery, he’s been there three weeks now, and he says he’s loving it. He’s at Lackland Air Force Base in Texas. He was out of a job, looking around, trying to figure out what he was going to do with his life. His dad, my brother, was a Marine. My brother gave him the same speech I’ve been making: Go look at all of them, find out who’s going to give you the best deal. So he wound up going into the Air Force.

TW: Can your brother still get up the hill, like I know you can?
I think he can, and he’s real proud of his son.

TW: Even though you have a break from filming, it doesn’t sound as if things will be quiet around your house.
With me, it’s never quiet. November is all about the Marines. I think I’m speaking at nine Marine Corps Birthday Balls. Besides Afghanistan in December, I look forward to helping out with “Toys for Tots” that month. There’s no sitting around on my agenda. And speaking of toys, I am currently in production on Toy Story 3, which is coming out in June of 2010. 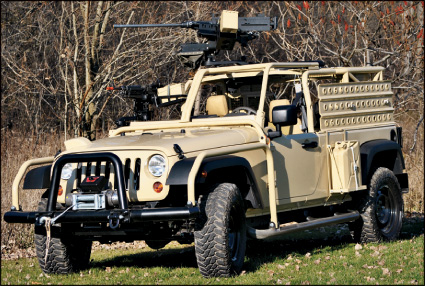 TW: Lots of fierce fighting in Afghanistan. Both the Chairman of the Joint Chiefs,…