Speaking to media and other guests during a discussion hosted by the American Enterprise Institute, Michele Flournoy talked about the development of the new strategy and what the White House hopes to accomplish.

“This refined strategy was designed to do full justice to the complexity of the challenges we face, and to make sure that every perspective and every option received careful consideration,” she said.

Flournoy defended the president’s thoroughness in the review, calling the process extremely disciplined. The president wanted to ensure his national security team and allied governments understood the relationship between the Taliban, al-Qaida and other extremists. He also wanted to make sure all were in agreement about the fundamental interests at stake, she said.

“I know there are those who would have liked to see a more rapid strategy review, but the president felt strongly that with so many lives and long-term security interests at stake, doing this fast was not as important as doing this right,” Flournoy said.

The strategy, which Obama announced Dec. 1, calls for a surge of 30,000 additional U.S. troops in Afghanistan to train Afghan security forces and to root out extremists in the country’s southern and eastern regions. The majority of those U.S. troops are expected to arrive there by August.

Obama also called on NATO for an additional 7,000 allied troops, Flounoy noted, adding that the U.S. and NATO mission there will focus on accelerating the quality and growth of Afghan security forces.

The emphasis on Afghan army and police will be “creating a quality force that is both effective and sustainable,” she said, and she noted that a focus on civilian assistance also is an important aspect of the strategy.

“We will also be tailoring our civilian assistance to increase governance capacity and economic opportunity in a carefully calibrated way,” she said. “We have assured our Afghan partners that our engagement and assistance will be enduring. We will not walk away from Afghanistan when the military mission ends.”

These efforts will allow the United States and NATO to remain focused on their goal of “disrupting, dismantling and eventually defeating al-Qaida by building Afghan capacity,” she said.

The U.S. effort in Afghanistan will be enduring, Flournoy said, explaining that Obama’s 18-month timeline isn’t a scheduled withdrawal. There is no U.S. military withdrawal date set, she said, but involvement by combat troops will not be “open-ended,” as the strategy emphasizes a gradual transfer of security responsibility to the Afghan government in the summer of 2011.

Flournoy said all combat troops will not leave Afghanistan after 18 months, and that the additional 30,000 would not be the new number of U.S. forces there. Security transition and U.S. drawdown will depend completely on conditions on the ground, she said.

Flournoy further explained that July 2011 was not an arbitrary date. During the review, officials conducted district-by-district analysis in every Afghan province, while projecting the current and future capacity of Afghan forces, she said. The review determined that July 2011 is a realistic date to begin transitioning security responsibilities, she added.

“We have very high confidence that by that date, conditions will permit us to end the surge and bring a gradual and responsible drawdown of U.S. forces,” she said. “Based on and assessment of conditions on the ground, the president will determine and adjust the scope and pace of the drawdown.”

Flournoy said the strategy should cause concern for the Taliban and al-Qaida. Rather than successfully creating conditions for a U.S. withdrawal, extremists now must face 30,000 more U.S. troops with additional NATO forces.

“If we are successful in reversing the momentum, [extremists] will start losing their foot soldiers. … Most of the Afghan Taliban are not ideologically committed,” she said. “We start changing that dynamic on the ground, and they’re going to come under even more pressure, so I think they have to be worried.”

Flournoy said the United States needs to show both its partners and adversaries in the region “we mean business,” and will deploy the military and civilian forces necessary to accomplish its strategic goals, while retaining tactical flexibility and flexibility to adapt.

The United States also needs to send a clear message that the U.S. military is not an occupation force, and it’s not going to be there forever. “Afghans must take primary responsibility for defending their own country,” she said. 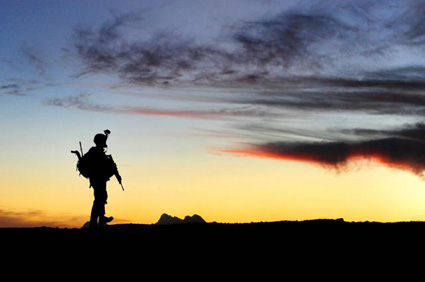