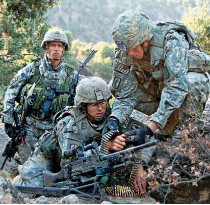 Beginning August 2010, the U.S. Army will start fielding the long-awaited M240L, a machine gun that shaves seven pounds off the current M240B.

The M240, made by FN Manufacturing LLC, is extremely popular with infantrymen. The M60 was a solid machinegun, but the M240 surpassed it in accuracy, reliability and durability. It was adapted from FN’s original MAG 58 design.

The only criticism of the M240 is that it is 4.5 pounds heavier the 23-pound M60. This meant that ground forces would have to pay for the M240’s increased performance with sweat and sore muscles. To solve this, Army weapons officials are designing the M240L with a titanium receiver instead of steel, and replacing the 23.6 inch barrel with a 17.6 inch barrel. These changes will bring the weight down to about 21 pounds, said Col. Doug Tamilio, the head of Program Manager Soldier Weapons.

“The only thing soldiers say they wanted is ‘we want it lighter and shorter,’” said Tamilo, adding that the M240L will be just as reliable as the current M240B. The Army had hoped to begin fielding the new lightweight design in August 2007. Most of the delay in the program has been because titanium is in high demand.

“Everybody wants titanium, and there is not enough in the world,” Tamilio said. Army weapons officials still have some additional testing to complete, but the plan is to start fielding the first of 9,200 M240Ls next July, according to Tamilio. But these won’t be for everyone. The Army will still keep their M240Bs, which are ideal for mounting on vehicles. The M240L “will go to the lighter infantry units operating in extreme environments,” Tamilio said.

Obama Pressured to Act on War

Beginning August 2010, the U.S. Army will start fielding the long-awaited M240L, a machine…