by Len Waldron
in Guns, Handguns
0 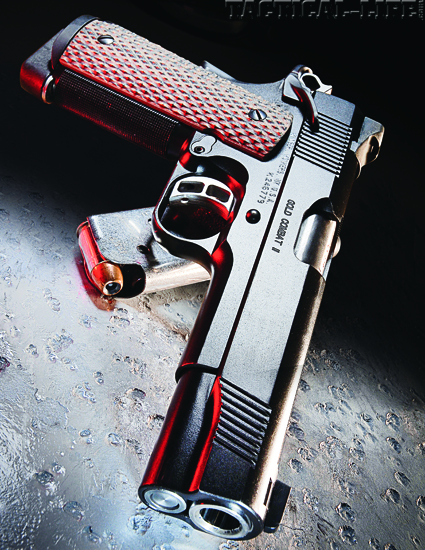 All of the go and none of the show—the Kimber Custom Shop builds the Gold Combat II from parts made together and hand-fitted. It features a match-grade barrel, Micarta grips, and a KimPro II finish.

Within a modern shooting market saturated by instructors of varying experience levels and endless manufacturer’s claims of technical prowess, expert instructors like Larry Vickers are as rare and as welcome as a Titanic lifeboat. I arrived in North Carolina with a Kimber Gold Combat II and a big box of ammo to shoot the Vickers Tactical Advanced Pistol course, and I would leave with a re-grounding in fundamentals and an appreciation for studying with a master.

Vickers isn’t simply a decorated combat veteran. He’s a shooter’s shooter as well as an accomplished pistolsmith. He’s also a 20-year veteran of the U.S. Army Special Forces, many spent with the 1st Special Forces Operational Detachment (1st SFOD-Delta). But his influence can be felt broadly today from his consulting work for Heckler & Koch (HK416, HK417 and HK45 pistol), SureFire lights, Schmidt & Bender scopes, Daniel Defense carbines and Blue Force Tactical Gear, as well as numerous weapons-related TV appearances. Oh yeah, he also was a founder of the International Defensive Pistol Association and is the namesake of the Vickers scoring system. Despite all this, students of his courses will always get a pure, unfiltered, down-to-earth Larrry Vickers.

The Vickers Tactical Advanced Pistol course is advertised as a three-day master-level shooting course. Hosted by Grey Group Training at the U.S. Training Center in Moyock, North Carolina, the facility is ideal for this type of instruction. The range has paper, steel, obstacles, poppers, and best of all, moving steel targets. Shooters came from as far away as Michigan and Utah, and all walks of life, ranging from active LEOs to civilians. Many had taken several courses with Vickers and their level of proficiency would reflect it. However, the scenarios in this course and Vickers’ expectations would challenge us all.

There is no small amount of pressure in showing up to a Larry Vickers course with a 1911 .45 ACP. There are few things both in the mechanics and operation of this weapon system that Vickers does not understand. Failures in either the pistol’s function or my handling would be immediately obvious. To answer this challenge, I carried the Kimber Gold Combat II 1911.

The Gold Combat II is built entirely in Kimber’s Custom Shop. The parts for each gun are manufactured together and individually hand-fitted. The production time for a Custom Shop gun is more than twice that of a similar production model. Kimber considers the Gold Combat II the apex of the defensive carry pistol. They set out to design the finest full-sized 1911 possible with “all of the go and none of the show.”

The Gold Combat II is an all-steel, full-sized 1911 .45 ACP. It features a deep-crowned, match-grade, bushing-less stainless steel bull barrel with a match-grade chamber that is fitted directly to the slide. The slide features front and rear cocking serrations and French shoulders that match nicely to the frame. The pistol has three-dot night sights and a flat top. 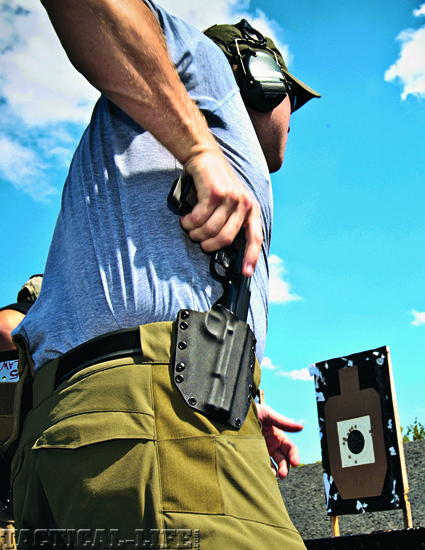 Anchored by the stiff and rugged Ares Gear Ranger belt, the holster was a solid platform draw after draw.

The frame’s frontstrap has 24-LPI checkering, and the high-cut triggerguard has 30-LPI checkering. Additionally, the Gold Combat II has a match-grade trigger, ambidextrous thumb safety, and an extended and beveled magazine well. The frame is finished in KimPro II, a self-lubricating matte black finish resistant to moisture and salt.

The only change I made to the pistol for this course was to add 10-8 Performance grip panels in Hyena Brown. The Gold Combat II’s grips are a nice brown, herringbone Micarta, but I like the more aggressive surface and the thumb cutaways in front of the magazine release on the 10-8s. I also used CMC 8-round Power Mags along with my KimPro Tac-Mags, and ran the gun with 230-grain Black Hills .45 ACP ball ammo. 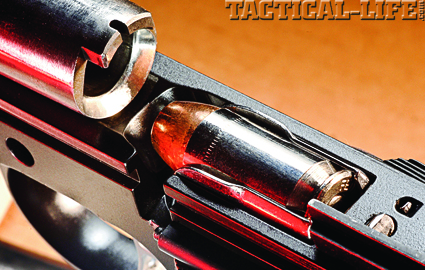 The Gold Combat II’s match-grade chamber is fitted directly to the slide. The 1911 holds nine rounds of hard-hitting .45 ACP ammunition, and it ran reliably throughout Vickers’Advanced Pistol course.

We learned quickly that Vickers has no magic secret—just a religious adherence to the fundamentals. Vickers introduced us to “El Snatcho,” the evil cousin of Murphy, who shows up to cause shooters to jerk the trigger. The “El Snatcho” phenomenon is a function of physics, stress and physiological control. Being aware of this obstacle is dramatically more important in pistol shooting because the pull weight of the trigger can be equal to and likely much more (in foot-pounds) than the weight of the weapon. For example, a 5-pound trigger on a 15-pound carbine—that’s not a major imbalance. But a with 5-pound trigger on a 3-pound pistol, you are pulling 40 percent more than the weight of the weapon to break the trigger. Fine control is critical. This is not new information, but Vickers was serious about indelibly etching the concept in our minds. We paired off and ran dry-fire trigger squeeze drills, and after multiple repetitions and variations, we moved into ball and dummy drills, the variety of which only seemed to be limited by Vickers’ imagination. We later returned to this concept again and again, as pulling fired shots off-target were rewarded with remedial, five-repetition dry trigger squeeze drills. Vickers told us, “There are many ways to align sights on target: sights, lasers, instinct—but there’s only one way to pull the trigger.”

As we moved into trigger reset drills, the concept evolved further. Knowing the trigger reset point on one’s weapon is critical to both follow-up shots and overall control. Luckily, I ran a 1911 with a well-tuned trigger and a distinct trigger reset. Follow-up shots were just a release-to-click and a press. For others, particularly those with striker-fired weapons, the evolution was more telling. 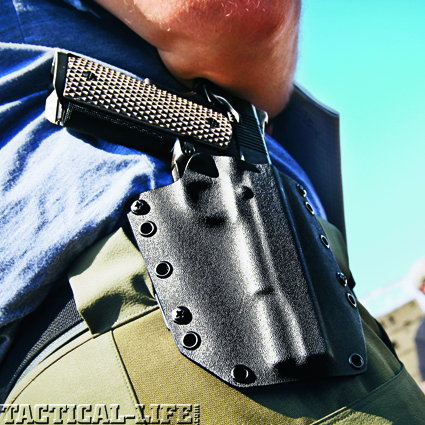 The remainder of the day was filled with reloading drills, particularly those from slide-lock. Vickers noted, “Here is one area where competition techniques can cloud reality. What’s the point of doing a speed reload and dropping a magazine with ammo on the ground? Fire to slide-lock and reload, or fight to cover and top off with fresh magazines.” Few techniques draw as much controversy as handgun reload techniques, so much so it’s almost comical, but Vickers has a rational approach. “Choose a technique that works and master it. However, if I were to rate the various techniques, I would stack them this way: 1. Release slide with support hand; 2. Slingshot/powerstroke; 3. Weapon-hand release (by far the worst of the three).”

The next two days were filled with training evolutions utilizing both bullseyes as well as stationary and moving targets. Each day, training began and ended with penance to El Snatcho as we tempered early-morning enthusiasm to shoot and end-of-day fatigue with trigger control drills. In between, Vickers ramped up the complexity and stress level by utilizing team drills, time constraints and movement (of both the targets and the shooter). The moving steel targets are great features of the U.S. Training Center. However, steel can be both good and bad. Vickers pointed out, “Training should be lots of bullseyes and some steel. Shooters like to see steel targets go down, and let’s face it, the sound is cool. But too much steel is a bad thing. Bad habits can develop quickly like waiting to watch steel fall, and groups almost invariably spread out. Typically, steel is larger than a bullseye target and a shooter will begin to utilize a broader sight picture because a dead-center hit on a steel plate and a solid edge strike will both make the same sound and knock the target down. Put those two shots on paper and they look like sloppy shooting.” 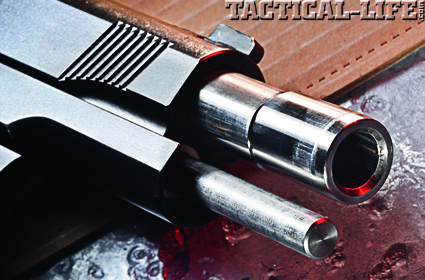 For better accuracy, the Gold Combat II features a deeply crowned, bushing-less stainless steel barrel that is 5 inches long. Its low-profile sights were easy to acquire during fast shooting exercises.

Vickers’ Advanced Pistol is not a tactics class; rather, it is an accuracy course designed to first reinforce the fundamentals and then stress them in a variety of ways. Students also got unfiltered Larry Vickers, which is arguably worth the price of admission. Vickers is generous with his time and advice on a variety of topics. For example, Vickers jumped aggressively on a question about weapons cleaning versus lubrication: “Unfortunately, the U.S. military and the Army in particular has made it such that soldiers clean their guns too often and even use abusive cleaning techniques. There is a myth that lubrication attracts sand. It’s simply not true. You are much better off having lube in the gun than having a clean gun. You can run a gun that’s a little bit dirty but well lubed, but you can’t run it the other way around.”

Students of this course should expect to learn, to be challenged, and to be pushed out of their comfort zone. I solved a long-standing problem with shooting decent groups while moving after Vickers pulled me aside and adjusted the way I was using my arms to dampen the effect of my footfalls. It is these personalized, on-the-spot corrections that can only come from wisdom and expertise—what many have come to expect from Vickers.

For more information, visit vickerstactical.com. For more on Kimber, visit kimberamerica.com or call 888-243-4522.