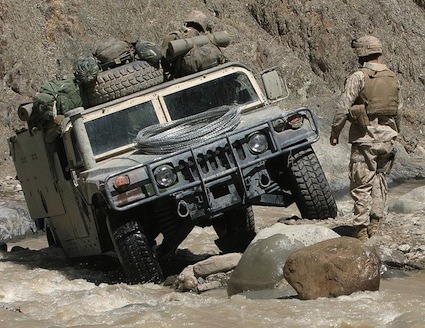 A U.S. Marine guides the driver of a Humvee through a river as they negotiate through the rugged terrain of Khowst Province, Afghanistan, on March 28, 2005. The Marines of Kilo Company, 3rd Battalion, 3rd Marine Regiment, are conducting security and stabilization operations in the Khowst Province in support of Operation Enduring Freedom. Cpl. James L. Yarboro, U.S. Marine Corps

USAA, a major insurer catering specifically to the armed forces and their families, based its study on 171,000 deployments by 158,000 of its members over a three-year period ending in February 2010, when combat was still raging in Iraq and Afghanistan.

In many cases, USAA found, soldiers took the driving style that kept them alive on the streets of Baghdad and Kabul and applied it to the suburban roads at home.

Not surprisingly, given the experience many soldiers had with improvised explosive devices (IEDs) and other roadside obstacles in combat zones, USAA found “objects in the road” to be the most cited of the 13 accident causes it studied.

A U.S. Marine guides the driver of a Humvee through a river as they…