WASHINGTON, May 5, 2009 – Getting the defense budget right for servicemembers and their families will be the measure of success, the chairman of the Joint Chiefs of Staff said here Monday. “There’s no more important part of that than our people and their families,” Navy Adm. Mike Mullen told an audience at the Navy League’s 2009 Sea-Air-Space Exposition. “If we get it right for our mid-grade [noncommissioned officers] and we get it right for our young officers, we will get it right for the future of this country from a national security standpoint and for the capabilities that we need no matter what the challenge.”

The fiscal 2010 defense budget has been submitted to Congress and soon will be the subject of much testimony by senior military officials, Mullen said.

When he served as the chief of naval operations, Mullen said, an estimated 60 to 70 percent of every dollar the Navy had was connected to personnel. Today, that focus on personnel should include wounded warriors, their families and the families of the fallen, he added.

“They still want to contribute. They want to raise their kids in a nice place. They’d like an education. They want their kids to go to school, and they want to make a difference,” Mullen said. “In my view, we cannot do enough for them, and that’s a check we ought to write right off the top of our budget to make sure they’re taken care of for the rest of their lives.”

It’s an area where the Defense Department has made great progress, but it still has a long way to go, he said.

The chairman said he considers “people issues” to be his top strategic priority, and fighting the wars the country is in as the top operational priority. That includes shifting the military’s focus to Afghanistan, he said.

“As we look at the operational requirements right now, you see us, as a nation, shifting our weight where the main effort is now Afghanistan,” he said. “We’ve got to make it so. We must shift our weight and make it a priority.”

Part of making it a priority means breaking down service cultures, the chairman said. War College attendance, career paths or other institutional entities should not impede making Afghanistan the country’s No. 1 priority, he said. Mullen noted that today’s military is is a combat-hardened force that has maintained an accelerated operations tempo for nearly eight years. In response, he’s calling for, among other things, a focus on balance of forces and resources. He said Defense Secretary Robert M. Gates has made that clear in his budget recommendations.

“I think Secretary Gates has sent pretty strong signals that programs that are spinning out of control just don’t have much of a future,” Mullen said. That’s also true, he said, for “over-required” programs that are increasing in cost.

“Clearly, there’s focus on balance that we need to make sure we get that right,” he said. “The characteristics … which our Special Forces have – an agility, a speed, an adaptability, a precision, a lethality, a small footprint – those are types of characteristics are absolutely vital for our military, not just now, but in the future.”

The Navy League’s Sea-Air-Space Exposition is a maritime exposition featuring more than 150 Defense industry exhibits and professional seminars. The organization has presented the expo in Washington for more than 40 years. 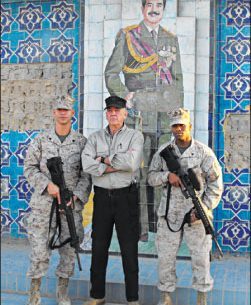 WASHINGTON, May 5, 2009 – Getting the defense budget right for servicemembers and their…