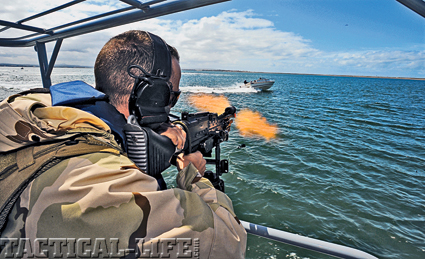 A sailor assigned to the U.S. Navy’s Maritime Expeditionary Force (MESF) engages a simulated suicide boat with an M240 in training.

The majority of Americans were introduced to the suicide boat bomb, or “waterborne improvised explosive device” (WBIED) in homeland security lexicon, when the USS Cole was bombed in October 2000. That attack was not the first or last to use a vessel fitted with explosives, however, and the tactic has been used continually by multiple terrorist organizations. Perfected in Sri Lanka by the Sea Tigers, a wing of the Liberation Tigers of Tamil Eelam, a terrorist group, the vessels and their deadly payloads were first designed with artillery shells fitted onto the bows of small fiberglass boats. Using a push-button detonator or protruding contact horns designed to function as a pressure switch when ramming, the explosions and shrapnel from these craft have killed over 200 sailors and civilians on targets ranging from warships to aid vessels since the rebels first used them in 1990 against a naval patrol in the island’s port of Tincomalee.

As the rebels advanced their cause, they also gained access to better weapons, including high-explosive charges and directional anti-personnel mines that they packed into their suicide craft along with ball bearings to increase fragmentation effect. With lessons learned from the Sea Tigers, other terrorist groups, including the Palestinian-based Fatah, Hamas and PFLP, and Al Qaeda and its subordinate networks throughout the Middle East, have adopted the tactic. Primarily using high-explosive charges, sometimes to detonate larger payloads of ammonium nitrate fertilizer, the latest boat bombs carry hundreds of pounds of explosives that can tear holes through even the largest ships. 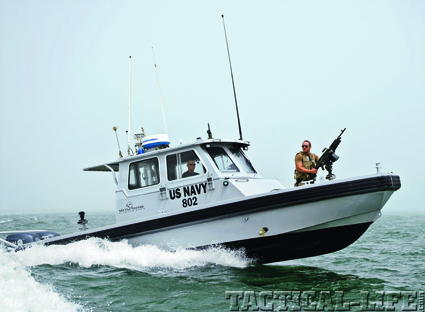 Detecting Sea Threats
Detecting these vessels is a near-impossible task once they have left their dock or trailer for open water. The only indicators that can be expected are minor abnormalities not easily observed unless close aboard. Although small craft are the preferred carrier for a waterborne bomb, larger ships are capable of serving in this capacity, as demonstrated by Palestinian terrorists who rigged 6 tons of TNT to the keel of a commercial freighter in a failed attempt to attack a crowded Israeli beach. 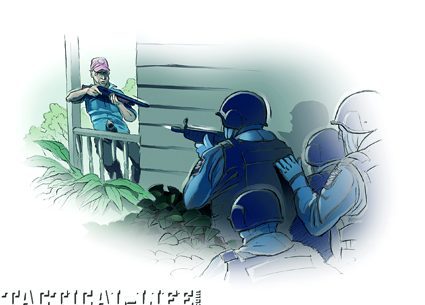