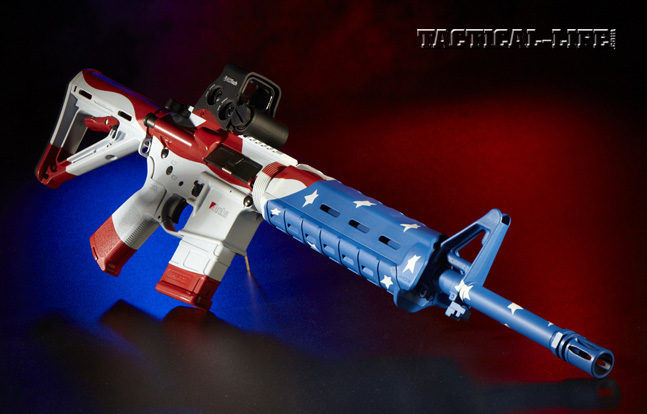 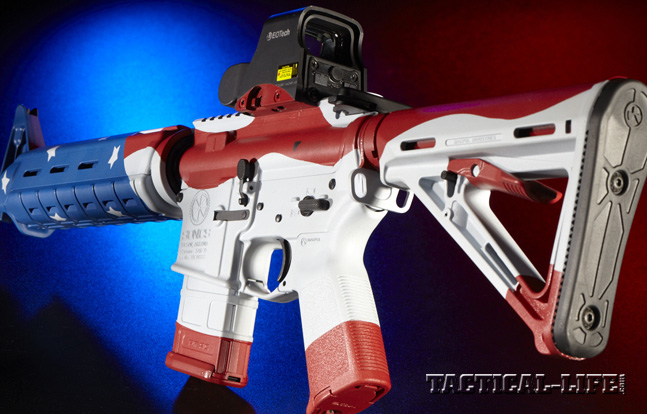 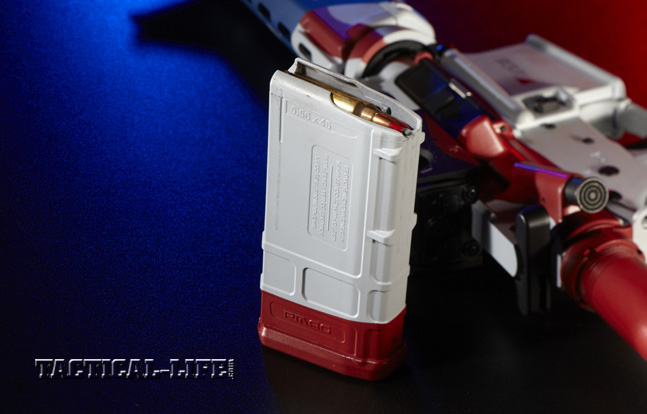 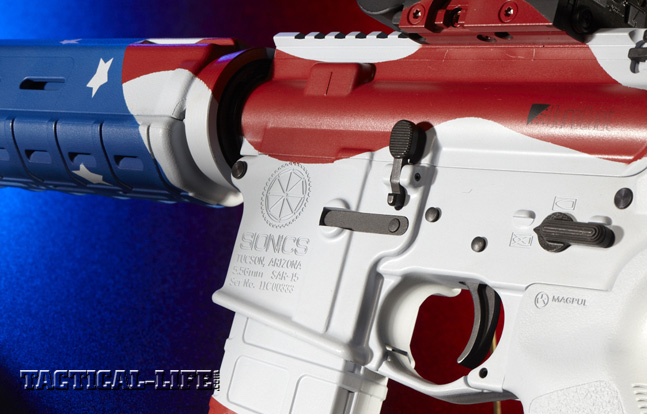 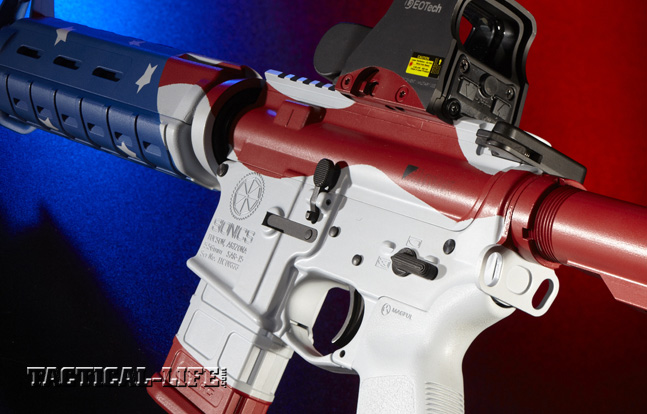 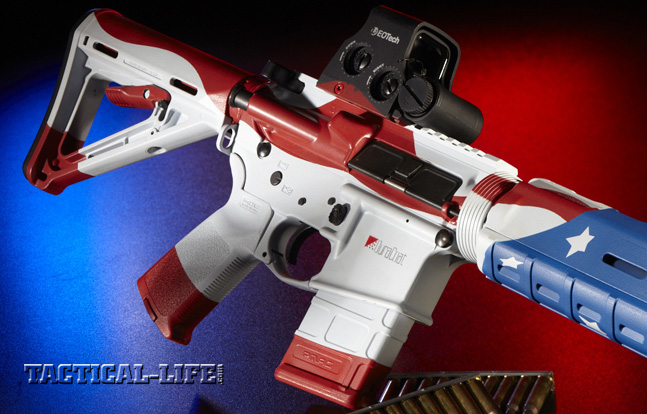 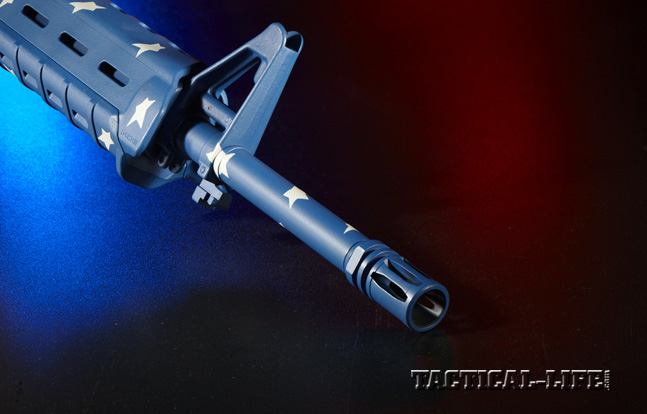 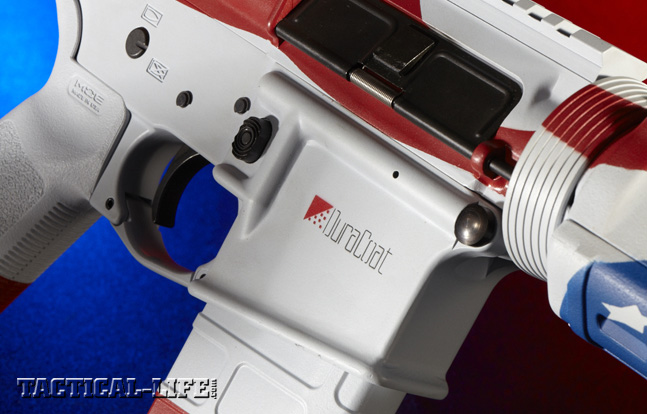 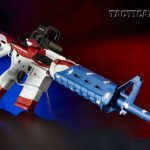 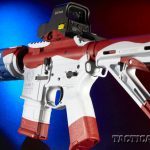 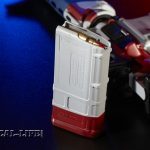 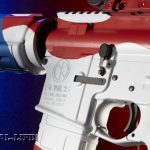 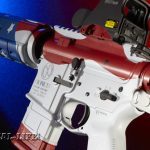 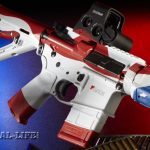 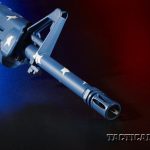 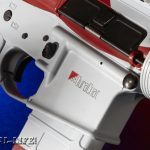 There are several reasons why good magazine editors enjoy long tenures with publishing houses. They often toil behind the scenes, working long hours to get the next issue off to the printer. The really creative of the lot—those who have true passion for the subject matter plus a solid understanding of and compassion with the readers—come up with great article ideas. When my editor, and friend of nearly 20 years, told me of team RF’s plan for celebrating AR ownership by bringing a few major manufacturers together to create a one-of-a-kind carbine, I was up to the task.

Teaming up with SIONICS (an acronym for Studies In the Operational Negation of Insurgents and Counter-Subversion, and at one time the name of a 1960s-era suppressor company) Weapon Systems and DuraCoat’s owner, Steve Lauer, we envisioned a unique AR-platform rifle with a patriotic paint job. The icing on the cake was an EOTech optic. To make the project even more interesting, it was decided to offer the rifle up for auction to raise money to donate to the MARSOC Foundation.

First, Joshua Ellis, president of SIONICS, selected his company’s Patrol Rifle I for the project. Then, it was shipped out to Steve Lauer at Lauer Custom Weaponry. A couple of days after the rifle arrived, I followed with my camera gear in tow. Landing late at night in Eau Claire, Wisconsin, I was greeted with a foot of blowing snow. Slogging my way to nearby Chippewa Falls, the home of Lauer Custom Weaponry and DuraCoat, I spent the following day with company owner Steve Lauer while he gave me a short course in the application of a firearm’s finish.

The first step is to disassemble the firearm into various parts. A chemical bath for the parts removes all of the residual oils to allow the finish to adhere. A shot or two of compressed air dried the parts quickly. Next, the parts were hung in front of a powerful exhaust fan to suck the overspray from the work area. Then the two-part base coat was mixed and loaded into spray applicators. After masking off areas that didn’t need a base coat, paint was applied. When needed, double coats were applied in progressively darker coats. Parts were hung in a oven-like cabinet to speed drying.

Once the base coats dried, it was time to start applying various tape masks to achieve the various patterns. More opposing coats were applied, masking tape patterns removed, and the parts went back into the drying cabinet. When a few of the parts didn’t satisfy Lauer, they were repainted to fit his ideas. Finally, the rifle was reassembled to reveal a splendid, patriotic red, white and blue American flag theme.

Steve Lauer’s quality work belies several years of experience in the firearms business. Since Wisconsin passed a law in 2011 allowing concealed-carry weapons, he has seen an upswing in handgun sales and permit applications.

When former President Bill Clinton began pursuing an AR-15 ban in the 1990s, during his attempt to push for an assault weapons ban, “People had one of two reactions,” Lauer said, “either fear or ‘You mean I can own that?’” Since then, AR-15s have become the most purchased type of rifle. Lauer Custom Weaponry builds and sells semi-custom ARs in a wide number of configurations. “Nobody realized how versatile these guns were until they got so much attention,” Lauer said. “You could say it’s a Mr. Potato Head for big kids. You can interchange the parts in a million ways. I can hunt deer with it in the morning, swap a few parts, and go squirrel hunting in the afternoon. People like options.”

The popularity of personalizing a weapon is what motivated Lauer to research firearms finishes. Once he perfected the formula and process, he established DuraCoat in 2000.

DuraCoat is a spray-on protective coating that adheres to wood, plastic and metal. It’s no-bake, no-preheat application makes it simple to apply, and its protection against scratching, cleaners, solvents, abrasions, corrosion and rust provides an added benefit. DuraCoat is available in dozens of colors and an equal number of pattern templates for total personalization.

After the American-flag-themed SIONICS rifle dried and the DuraCoat cured, the rifle was reassembled and shipped back to its manufacturer in Arizona. SIONICS CEO Joshua Ellis personally oversaw that the Patrol model lived up to the company’s reputation for quality. SIONICS Weapon Systems is the result of many years in the firearms industry. Over a period of time, SIONICS underwent some changes, brought in additional staff and moved into a larger production facility. “Although the original firearms that we produced were what we believed to be the best available, we knew that they could be better,” Ellis said. “With new changes put into place, we took control of manufacturing nearly every part associated with the final product that we produce. We are no longer looking for the best parts available, but setting a new production standard. Only by setting this standard are we able to control, with absolute certainty, the overall quality of each firearm that leaves our facility on a daily basis.

“It is easy to talk about the specifications of our individual parts, but what really makes the difference is how we build and test our firearms,” Ellis added. “After all, each individual part is only that, an individual part. No matter how good a part may be, the finished product is no better than the weakest link. Our focus at SIONICS is quality. While we have an established product line, we think of ourselves as a custom shop. There are no assembly lines or minimum-wage workers. Each and every firearm that we produce is built by one of our master gunsmiths.”

Each firearm undergoes a 21-point quality-control inspection. “After passing our stringent standards, we transport our firearms to a range and test-fire them to ensure reliability, function and accuracy,” Ellis concluded. “Only after all of these steps are complete do we finalize our quality-control checklist and package the firearm for shipping.”

The Patrol Rifle I’s barrel is MIL-B-11595E-certified 41V50 CMV steel with a 5.56mm NATO chamber that gets a hard chrome lining. After being X-rayed, it is magnetic-particle inspected for imperfections. Each barrel is checked for proper headspacing, profile dimensions, gas port size and location. Muzzle crowns are inspected under magnification. All of SIONICS’ barrels receive a durable manganese-phosphate outer finish. The feed ramps and chambers are lightly polished and, if required, front sight bases are installed in a custom alignment fixture using hardened and tapered crosspins. Every one of its barrels is test-fired to ensure reliability, function and accuracy. Any barrel that does not pass every test and inspection is rejected.

The Patrol Rifle I is the base level of SIONICS’ mid-length gas system guns. The proven mid-length gas system, developed specifically for carbines with a 16-inch barrel, is widely accepted as the best choice for this size of rifle. The Patrol Rifle I also features a premium barrel, a nickel/PTFE-treated M16 bolt carrier, a mil-spec bolt with an extra-power extractor and a 4.5-pound, single-stage law enforcement trigger.

Both the upper and lower receivers are made from 7075-T6 anodized aluminum. The handguard is a Magpul MOE unit that matches the adjustable Magpul MOE buttstock and pistol grip. This differs slightly from the company’s standard Patrol Rifle I, which wears a Vltor IMod buttstock. And while SIONICS ships the standard flattop Patrol Rifle I with a Magpul MBUS backup rear sight, this “patriotic” model utilized an EOTech holographic weapon sight.

I’m sure that the DuraCoat-finished rifle would have withstood some rough handling, much as it has with other rifles I’ve abused, but I didn’t want to produce any unnecessary wear and tear. I even went to the trouble of putting a layer of electrical tape on the shell deflector to keep it from getting dinged up. After all, this custom rifle was destined for a fundraising auction for the MARSOC Foundation. So, I picked three factory loads and zeroed the rifle at 50 yards. After a couple of five-shot groups for record at 50 yards, I moved to 100 yards and shot one group with each load.

A big disclaimer needs to be waved like a flag in a stiff breeze. A non-magnify optic has some limitation when trying to shoot precision groups at 50 or 100 yards. Comparing other rifles that I have tested with a 20X scope and later fired groups on target at these ranges with a non-magnifying optic leads me to believe that this rifle can produce 1-MOA groups with ease.
This is a one-of-a kind rifle built to raise money for a worthy veterans’ organization. Stay tuned for details on the fundraising auction and make your bids to own a truly spectacular rifle. 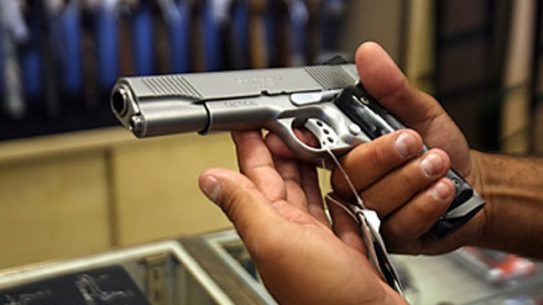 Illinois Gun Sales Up During Holidays

Gun sales have increased during the holiday season in Illinois for two primary reasons:...