by John Fasano
in Guns, Rifles
0

Green gas. C02. Scuba tanks. People will go to great lengths to power their air weapons, but I have always been the biggest fan of break-barrel air guns. The source of the power comes from you: crack open the barrel, lever it down until the internal spring is set, place a pellet in the breech end of the barrel, close it and you’re ready to fire. Simple, and it allows you to take to the field for an entire day of shooting without worrying about bringing along your “charging station.”

Case in point, Gamo USA’s fantastic new Silent Stalker line of air guns. The Silent Stalkers are actually an evolution from the break-open rifle, which traditionally used the action of the barrel opening to compress a giant spring in a chamber running beneath the barrel. When the trigger was pulled, the spring would rapidly expand, compressing the air behind the pellet and sending it rocketing out of the barrel. The high-velocity versions of these spring piston guns were heavy, smaller shooters did not always have the strength to cock the heavy spring, and the FWAMP! sound was almost as loud as shooting a .22 Short cartridge. 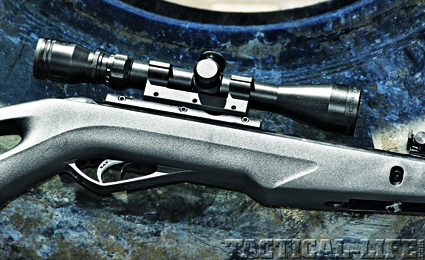 The Gamo 3-9X scope included with the Whisper is available with a one-piece mount that has a built-in recoil pin.

Gamo’s Silent Stalkers use their new Inert Gas Technology (IGT), a new advanced system for break-barrel air rifles. This innovative technology uses a pneumatic inert gas cylinder instead of a conventional spring. Even cooler, in the Silent Stalker Whisper .22, the IGT has been combined with the integrated noise dampener ND52. That makes the Gamo SSW the most technically advanced break-barrel on the market, giving higher velocities with less noise and vibration.