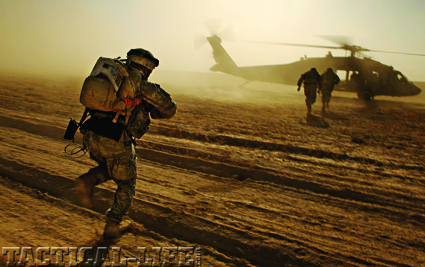 It’s no secret that the .338 Lapua is perhaps the hottest cartridge in military circles. It has about twice the range and muzzle energy of the 7.62x51mm (.308), retains more energy—around 700 fpe (foot-pounds of energy)—at one mile than the 7.62x51mm has at 700 yards, and in the proper gun, can achieve groups of ¼- to ½-MOA. Moreover, its accuracy and power enable it to serve effectively in both the anti-personnel and anti-materiel roles. While the .50 BMG is unquestionably better against vehicles, aircraft, buildings, radar dishes and other similar targets, the rifles chambered for it are much larger and heavier than those firing the Lapua, becoming essentially crew-served weapons. Moreover, the terminal performance gap between the .50 and the Lapua is being bridged by new .338-caliber bullets with armor piercing, incendiary and HE (high explosive) capabilities. For all of these reasons, the .338 Lapua has been successfully used in Iraq and Afghanistan, and branches of the military have initiated efforts to develop a standard-issue long-range sniper rifle in that caliber.

The Surgeon Remedy incorporates the power and range of the .338 Lapua in an accurate, lightweight and virtually indestructible rifle. Scope is U.S. Optic’s SN-3 3.8-22.

The .338 Lapua has also quietly garnered some attention from law enforcement agencies, whose roles and responsibilities dramatically widened after September 11, 2001. Yes, it is true that even now, counter-snipers in many departments are limited by policy to shots of 200 yards or less, and thus need nothing more than a .308. However, it is equally true that new security challenges at airports, seaports, nuclear power plants, government buildings and so forth have created a need for a powerful, ultra-long-range precision rifle capable of neutralizing not only personnel but also cars, trucks, small boats and the like that may contain explosives or a group of armed terrorists. The penetrating energy of the .338 Lapua also makes it useful for engaging targets hidden behind walls or barricaded within buildings, as well as detonating many types of UXO (unexploded ordnance) or IEDs (improvised explosive devices).

Departments or agencies looking for a .338 Lapua precision rifle have quite a number of models to choose from. One of the most accurate and rugged of these is the Remedy Extreme Long-Range Rifle, from Surgeon Rifles.

The Remedy receiver is a massive unit with integral recoil lug and 30-MOA Picatinny rail. The trigger is a Jewell unit.

The Remedy, available in .300 Win Mag as well as .338 Lapua Mag, is based on Surgeon’s novel XL action. Surgeon Rifles first became known in tactical circles for its 591 Short Action, a Remington-style action optimized for reliability, rigidity and durability with the recoil lug and 20-MOA Picatinny scope rail integral with the receiver. Also standard is a one-piece bolt and bolt handle stub, the latter being threaded for the attachment of a variety of bolt handles. The XL action retains these signature features —albeit with a thicker recoil lug and a 30-MOA integral rail, but incorporates them in a larger, more massive flat-sided receiver of 4340 steel hardened to 40 Rc. Measuring 1.45 inches wide, 9.47 inches long, and 1.81 inches high, with a 3.35-inch-long ejection port, the receiver alone weighs some 46 ounces.

The fluted two-lug XL bolt, of 4140 nitrided to a surface hardness of 60 Rc, is also oversize, with a 0.743 of an inch diameter and a 1.05-inch lug circle, and a length of 7.6 inches. The threaded bolt handle stub, machined in one piece with the bolt body, accepts standard, target and KMW-style tactical bolt knobs. Available in standard, magnum and .338 Lapua bolt faces, the XL bolt head features a plunger ejector and a spring-loaded claw extractor set into the massive right locking lug. This extractor position affords a flatter ejection angle that prevents the brass case from hitting the scope on its way out of the action. An anti-bind slot in the left bolt lug engages a raised bolt guide in the left receiver wall. Inside the bolt is housed a 7.35-inch long firing pin weighing 1.9 ounces, powered by a 24-pound coil spring, and terminating at the rear in a steel bolt shroud. The combination of a heavy firing pin and a firing pin fall of 0.240 of an inch helps ensure ignition reliability. 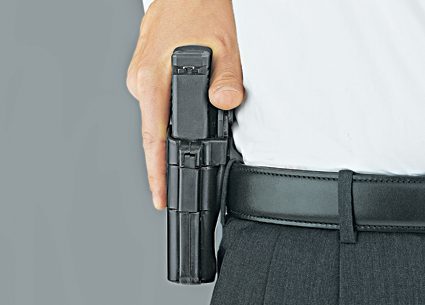 U.S. Army soldiers run towards a UH-60 Black Hawk helicopter as they are extracted…