Workshop…that was the name given by some people to our annual pilgrimage to the Hanging Bull Lodge run  by Spur Outfitters. The objective  was to rid the property of destructive varmints by use of the new Smith & Wesson high-end AR-style rifles. To assist, the fine people at Hornady supplied their superb .223 ammunition. SureFire was also there, explaining their lights and demonstrating the latest in their suppressor technology. Optics were provided by Trijicon and Bushnell. 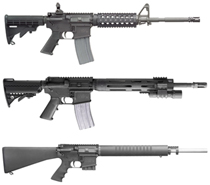 Firearms & Hardware
The centerpiece of the workshop was the Performance Center (PC) version of the M&P15. Fitted with 20-inch stainless steel barrels and free-floating handguards for accuracy, the standard A2 stock was fitted aft. The barrels featured 1-in-8-inch rifling. This differs from commercial standard 1-in-9 inches and the 1-in-12 inches in the original AR design for the .223/5.56x45mm.

I said that the bullet weights you use dictate twist rate. Apparently it is the length of the bearing surface of the bullet. The heavier the .22 bullet, the longer the length. The longer that surface is, the quicker the twist you need to fully stabilize the bullet. If the barrel has a rifling twist that is over fast for the bullet, say a light 40-grain varmint bullet in a 1-in-7 inches, accuracy can suffer. Similarly, an attempt to use a 77-grain bullet in a 1-in-12-inch barrel can bring problems. The compromise is the commercial 1-in-9 inches.

It seems to work fairly well with the central range of bullets, 50 to 62 grains or so with the nod going to 55-grain pills…sometimes. We’ve found that there’s more dispersion between loads of the same bullet weight and relative bearing surface length than between bullet weights, within reason.

The 1-in-7-inch twist is the military standard, as they are primarily using rounds of 62 grains and up. The 1-in-8-inch twist of the PC rifle is a reflection of the matches where the PC foresees their rifles being used to compete.

The trigger is a fine, two-stage match trigger set to break at about 4.5 pounds. The length of trigger movement is noticeably short and free from roughness.

When I fired my first day’s sighting-in target, I didn’t really notice the shortness of pull. Matt Rice, a media relations representative from Blue Heron Communications, spotted for me. He said that the three bullets were touching just over point of aim at 100 yards. This was using Hornady Match ammo.

After a few days on the ranch, during which I shot an M&P15X (a law enforcement standard carbine), I went back to the PC rifle. The trigger surprised me when it broke easier and quicker than it did on the M&P15X.  The PC trigger is noticeably better. The handguard was a full-length Yankee Hill Machine free-floating number. There’s no pressure on the barrel and they didn’t seem to heat up as quickly as other fore-ends did.

The rifles were provided in the anodized alloy/stainless steel motif except for one. One of the PC guns was rendered in camouflage. This wasn’t a military-style camo but a hunting pattern. The stock, upper and lower receivers, and fore-end were all rendered in camo. The barrel was natural stainless. The pistol grip was an olive drab model by Hogue. Accents (receiver pins, dust cover, charging handle, gas block/rail and butt pad) were all in black. It makes for a striking appearance.

S&W brought some other rifles including the new M&P15X. I’d been told that this was the most popular law enforcement package S&W makes. A 16-inch, 1-in-9-inch twist carbine that comes with a Troy Folding Battle Sight (rear), a four-rail tactical handguard and a 6-position collapsible stock.

It has everything the agency wants, including optics-ready capability, with nothing it doesn’t need. One of the “X-rays” was made available. It was fitted with a Trijicon ACOG 4×32. While it’s not the optimum setup for long-range varminting, it is good to use as a duty rifle. It got me more trigger time with a sight I’m more likely to be using.

I used that carbine for much of the time I was there. I’d hate to have to estimate the amount of ammo that chugged through that gun, but I believe it to be well in excess of 1500 rounds; the week’s average per S&W rifle was around 2900 rounds.

Another carbine that was shown around was the M&P15VTAC, a joint venture between S&W and Viking Tactics, a training and products company involving retired SGM Kyle Lamb. This is a nicely set-up fighting rifle.

Another 16-inch carbine, this one allows for the use of the heaviest and longest of the commonly used 5.56mm rounds with a military-style 1-in-7-inch rifling twist. The stock is a Vltor ModStock, a very popular stock for military and police. The carbine features the SureFire flash hider and their G2 light. The fore-end handguard is a model by VTAC/JP. It’s slender and easily grasped. The action is composed of the JP single-stage match trigger and speed hammer. There are three adjustable Mil-Std- 1913 rails and the rifle is shipped with a VTAC Padded 2-point sling.

Ammo & Optics
In this era of budget tightening constraints on ammunition, Hornady Manu-facturing stepped up to the plate and provided us with match ammo. The load was the 53-grain match HP with cannelure. You’ll see the load listed as “53-grain Match HP/WC.” The “WC” is important particularly when the round is going to be running through a semi-auto and not a slow-running, long-range bolt-action varmint gun.

I’m sure the group I fired at sight-in on Monday of that July week was not the tightest 100-yard group with that load or rifle. It was plenty tight enough to get the job done. I fired some shots I know I shouldn’t have been able to make and scored hits. I saw others reach right out to nearly 400-yard territory with the M&P15PC and the Hornady Match load.

The Hornady load did an outstanding job in the 1-in-9-inch twist carbine that I adopted, just as it did in the longer Performance Center guns with their 1-in-8-inch twist barrels. I saw Gunsite Instructor Il Ling New using the VTAC with the zero-magnification Trijicon Reflex sight. She made a number of hits out to and past 100 yards using that setup.

While the 53-grain bullet isn’t optimum for the VTAC M&P’s barrel twist, it was close enough to hit prairie dog-size targets with a 1x optic at football field distances. This tells me that the carpenter is more important than the hammer, but that this hammer worked just fine. I got the VTAC away from her, and made several hits with the VTAC/ Trijicon Reflex combination.

Speaking of optics, the Trijicon units were bright, too bright on our sunniest days. A piece of electrical tape over a portion of the fiber-optic light tube would suffice to fix that. The 4×32 ACOG was a real hit with me. I made a number of medium-range hits with that rig. While it’s no 300-yard-plus prairie dog gun, the Bindon “carat” reticle would cover the rodent up just past 200 yards, making “guess work” the rule of the day. I was able to figure out the optic/carbine/ammo combination and get onto the prairie rats at around 200 to 250 yards, but it was stretching my abilities.

I saw several good shots in the 300-yard-plus ranges with the PC guns and the Bushnell optics. Some rifles were fitted with the Bushnell 4200 Tactical with the mil-dot reticle. Others had the Bushnell 3200 with a more conventional reticle.

The longer, more powerful scope was obviously helpful at longer ranges. I found that with either of the fine Bushnell optics, I’d have to see the varmint and then try to find him again in the optic. I got to keeping the glass on the lower power magnification, greater field of view and easier to acquire the target and then “tighten it up” by increasing the magnification if I needed to and if there was enough time.

Our most impressive hits were made with the Bushnell fitted guns. These are long-range optics, good for smaller targets. The Trijicons we used are for larger targets when speed is the absolute necessity. Having both there gave us flexibility.

SureFire
We had the opportunity to shoot a pair of M&P15 carbines with the SureFire suppressors attached. These are the “shorty” version, extending only 5.4 inches past the muzzle and adding just a little over 4 inches to the carbine.

These aren’t silencers. They are suppressors. The noise is definitely quieted, but these aren’t silent by any means. Think of a .22 pistol being fired without hearing protection. That will make your ears ring but it’s not the blast of a 16-inch 5.56mm carbine.

With the shorty in place, the M&P would bark but we could hear the ballistic crack of the 53-grain bullet breaking the sound barrier and could hear the bullet hit the target! Without the can, all you hear is the blast at your end.

Some new flashlights were also shown, including the current rendition of the Outdoorsman light. An LED runs the arrangement. When you turn the light on, you get a low-powered light—enough to navigate around the campground. If you need more light, push the rear-mounted button twice; tactical-level light is produced. SureFire makes great products for the law enforcement and tactical fields, but they are also good for the outdoorsman.

In that vein, their suppressors could be potentially very useful for sportsmen. I understand that suppressors are required or at least expected if you are a hunter in Europe. The noise suppression laws are tough and there is nothing inherently evil about firearms suppressors.

Final Notes
Performance was the watchword of the week. The PC rifles were crowd pleasers except for the crowds of varmints put under by them. The carbines likewise turned in stellar performances.

The optics, Trijicon and Bushnell, were first rate. The ammunition, Hornady Match, was up to the task and shot better than I could hold.

Spur Outfitters and their staff, the Hanging Bull Lodge and the Spur properties were all wonderful. We were warmly received and well taken care of. It was like coming home.