by Richard Nance
in Uncategorized
0

0
SHARES
1
VIEWS
Share on FacebookShare on Twitter
Dynamic entry requires S.W.A.T. operators to saturate a structure and dominate the occupants. The success of dynamic entry is based on surprise, speed, and violence of action.

Dynamic Entry
Thanks to the influence of television and movies, when most people think of S.W.A.T., the image they conjure up is probably of a team of well-equipped, black-clad police officers armed to the teeth, kicking in doors and moving through a structure with reckless abandon in search of the bad guys. In the movies, this often leads to a dramatic Hollywood-style shootout, but in real life, dynamic entry is designed to overwhelm the occupants of the target structure and ultimately lead to compliance without a shot being fired. 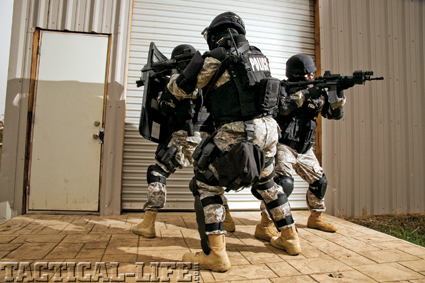 Each team member must fully understand his area of responsibility. Here, two operators address a door while a third covers their proverbial sixes.

Surprise Element
Whether considering individual or team combative tactics, surprise is a crucial factor. The goal should always be to attack when the adversary is off-guard. Surprise can be achieved through stealth movement to the breach point, a loud breach, the use of noise-flash diversionary devices and aggressive movement by team members. Unfortunately, during the service of most search warrants, the knock and announce requirement negates the element of surprise. This could give occupants ample time to formulate a plan to destroy evidence or worse yet, arm themselves.

Speed Factor
While speed is essential during a dynamic entry, an operator should not move faster than his brain can process information or faster than he could accurately shoot. It does no good to run through the structure and miss a critical piece of information or fail to detect a threat. Far too many officers have literally rushed to their death when there was no real urgency. 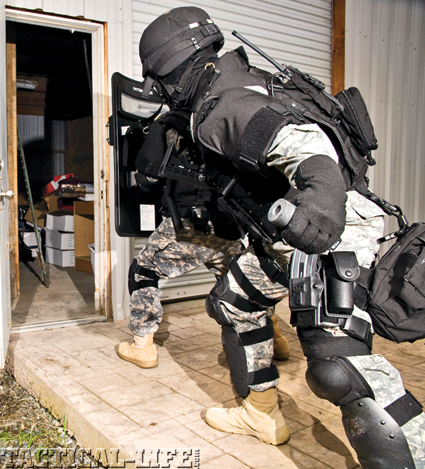 From behind the cover of a ballistic shield, a S.W.A.T. operator prepares to deploy a diversionary device.