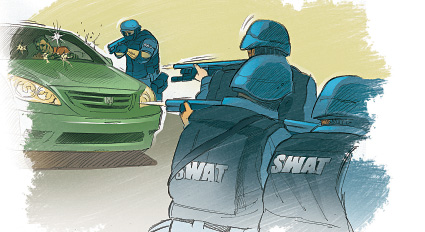 The Gwinnett County Police Department received a call from a local drug dealer’s family informing them that the drug dealer had been kidnapped by his boss, an international drug cartel lieutenant from Mexico, after he failed to pay his boss for drugs that he had previously received. After receiving the call, the Department notified their S.W.A.T. team and began their targeting process to locate both the wayward drug dealer and his captors.

A Spanish-speaking officer posed as a wealthy family member and spoke to the kidnappers on the phone to work out where and when they could meet to exchange the ransom for the dealer. He was instructed to drop the ransom in the trashcan of a local gas station. Officers made a phony drop at the agreed upon gas station and then set up observation to see who came to take the bait. The kidnappers arrived, retrieved the package and attempted to leave. Once the kidnappers were all back in their vehicle, the S.W.A.T. team initiated their takedown.

The S.W.A.T. team parked their vehicle directly in front of the kidnappers, preventing them from driving away. The driver rammed the S.W.A.T. vehicle and began a series of three-point turns as he attempted to get away. The SWAT officers surrounded the vehicle and ordered the driver to exit. The driver hesitated for a moment and then reached under his seat to retrieve a firearm. Three S.W.A.T. team members simultaneously engaged the driver, killing him before he could bring the weapon to bear. Twelve bullets hit the driver, killing him instantly. The other two passengers were not injured. The police rescued the kidnapped drug dealer a short time later.