0
SHARES
0
VIEWS
Share on FacebookShare on Twitter
An Army team launches an RQ-11 Raven UAV. An operator tosses the aircraft while his partner operates the controls.

The action is all too familiar. A convoy of troops in Humvees patrol a road in the barren hills of Afghanistan. Suddenly, the smoky trail of an RPG corkscrews from a concealed position on a nearby slope. It’s a near miss, but accurate enough to disable the lead vehicle. As GIs pull up behind the crippled lead truck and exit their Humvees, gunfire erupts. Soldiers scramble for cover and hope snipers don’t open up on them from the opposite side of the road. Fire is intense, and there’s no chance to deploy flankers to neutralize the attackers. Suddenly, a soldier reaches for a pack and extracts a tube-like device about 2 feet long. He extends spindly legs to prop up the tube, which looks like a cardboard toy mortar. He presses a button on a handheld controller, and a miniature rocket flies from the tube with a sudden whoosh, instantly deploying thin wings to steady its flight. 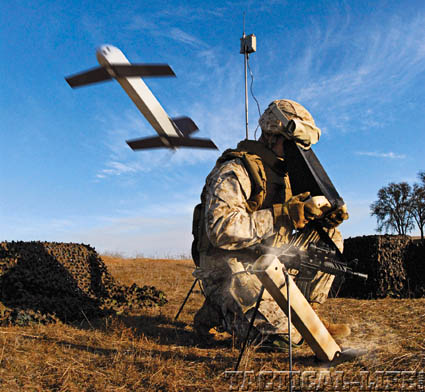 The little flying machine, dubbed the “Switchblade,” is anything but a toy, however. Flying under the soldier’s remote digital commands, it circles over the enemy emplacement, transmitting live video of the position from overhead to a screen on the controller. Once the operator has fixed on the shooters, he manipulates the controller, directing the Switchblade on a collision course with the insurgents. The Switchblade obeys and detonates on impact. The hillside shooting ceases abruptly after the blast. A subsequent Switchblade launch surveys the countryside nearby and finds a parked truck, potential getaway transportation for surviving snipers who race to it to make their escape. Once again, the operator times the UAV’s flight perfectly, and the Switchblade hits the truck just as the engine cranks, stopping it—and its occupants—permanently.