SWR’s latest .45 caliber pistol suppressor combines impressive sound reduction with one of the best Nielsen devices in the suppressor industry. Called the HEMS2, the High Efficiency Maritime Suppressor Model 2 can make a mainstream .45ACP pistol both stealthy and comfortable to shoot without hearing protection. Based on patented technology, the HEMS2 provides reliable service on Heckler & Koch’s MK23 and USP45 Tactical pistols, as well as on the M1911, SIG SAUER P220, and Glock 21 pistols, among others. The HEMS2 is highly regarded by industry insiders.

Regard for the HEMS2 suppressor begins with first impressions, quality you can see and touch. Overall fit and finish are superb. The rear of the suppressor tube features impeccable knurling, which facilitates installation and removal. That knurling is also handy when field-stripping the suppressor’s Nielsen device. Also known as a recoil booster, the Nielsen device is a gas-operated module in the back of the suppressor that allows a pistol to unlock and eject properly despite the added weight of a suppressor. Knurling on pistol suppressors is rare in the extreme. SWR earns bonus points for the extra effort. Then there’s the takedown tool used to disassemble the Nielsen device for periodic cleaning. Its human engineering and workmanship are outstanding, and the tool is anodized red so it can be found more easily in a busy toolbox or kit. Takedown tools can be crude, cheap afterthoughts but SWR’s are a work of art. While these are little things, they suggest that SWRs corporate culture has a passion for quality, user-friendliness, and attention to detail.

Omega Baffles
Then there’s important quality you can’t see, such as the improved baffle stack that delivers better sound reduction and less first-round pop than its predecessor. The patented Omega baffles are noteworthy because they do not generate cross-bore gas jets that can sometimes degrade accuracy or change point of impact. It should come as no surprise that suppressors using Omega baffles have a reputation for excellent accuracy and minimal POI shift.

The Omega baffle looks more like an old-fashioned silo with a wide roof than the cone-based baffles that are a central theme in most suppressor designs today. Since a suppressor works by juggling changes in pressure, volume, and temperature of combustion gases driving a bullet out of a barrel, it should come as no surprise that the Omega baffle incorporates many of the same core principals as previous baffle designs. What makes the Omega baffle one of the most important designs in the history of sound suppression is that it exploits basic gas laws in some surprising ways. The Omega baffle is a coaxial design, which means that the baffle (silo roof) seals an outer ring of airspace around the baffle core. A reduced diameter spacer (silo wall) forms the wall separating the inner and outer coaxial chambers. This outer coaxial ring is useful space for delaying and cooling hot combustion gas. Each baffle nests with adjacent baffles to strengthen the baffle stack.

How the Omega baffle works is a brainteaser, since it’s deceptively simple to the casual observer. The Omega baffle incorporates no slanted sidewalls, no wandering mazes for trapping gases, no surfaces with geometric patterns to increase turbulence. The top-secret key to the Omega baffle is not what’s there, but what’s not there. All that is left are holes. Holes in the inner coaxial walls, holes in the baffles, holes that encourage gas to move where it can be slowed and cooled. A flute of holes per baffle, an orchestra of flutes per suppressor. Each flute must be tuned individually to achieve a harmonious whole. Tuning Omega baffles depends upon caliber and barrel length, among other factors. Hole size, shape, pattern, and relative position to adjacent baffles are also critical design factors.

Nowhere is baffle tuning more critical than in the design of .45 caliber pistol suppressors, which must be shorter, slimmer, and lighter than rifle and submachine gun suppressors designed for the same cartridge. Designing effective outer coaxial chambers is also more critical for a .45 suppressor than the smaller pistol calibers. The HEMS2 incorporates design elements in the coaxial chambers to avoid gas behaviors that have limited the effectiveness of coaxial structures in some other suppressors.

Other Models
SWR offers two variants of the HEMS2. The standard model, evaluated in this article, is 8.3 inches long and 1.3 inches in diameter. It weighs 11.1 ounces, which is 4 ounces lighter than some boostered .45 suppressors, and about the same weight as a few others. The more compact HEMS CT is just 6.8 inches long, tipping the scales at 9.7 ounces. Both are made from 7075 HC aluminum and stainless steel. Since different pistols have different timing and force requirements during the action cycle, SWR offers a variety of Nielsen pistons designed for most mainstream .45 pistols. To adapt a HEMS2 to another handgun, simply replace the booster piston with one designed for that particular pistol. Each suppressor comes with one booster piston. Additional pistons run just $60 each.

It’s worth noting that designing an effective pistol suppressor in .45 caliber is much more difficult than for smaller pistol calibers. Why? It’s that whopping big hole running down the center of the can. Baffles scraping away at the edge of the gas stream behind the bullet do proportionately less work than baffles with small bores. All things being equal, the bullet passage in a .45 caliber suppressor contains about 40% more gas than a 9mm suppressor, but only about 20% more baffle edge. Also note that the peak sound pressure level of a .45 pistol is several decibels (dBs) louder than a 9mm gunshot. Clearly, a .45 suppressor has a lot more work to do than a 9mm suppressor to achieve the same level of suppressed sound.

That’s why .45 suppressors of practical size are designed to be shot “wet.” This means that water, grease, or some other coolant medium is added to the rear of the suppressor to improve the amount of sound reduction. The wet sound signature is normally much quieter than a suppressor shot dry. Upon firing a round, the hot combustion gases heat and vaporize a portion of the coolant. This cools the combustion gases, robbing them of energy that would otherwise add to the perceived level of gunshot noise. This process also significantly reduces muzzle flash.

Shooting Impressions
During rapid-action drills with the HEMS2 mounted on a USP45 Tactical pistol, the HEMS2 handled well and delivered reliable functioning even when the Nielsen device was filthy. That’s a tribute to the three-lobed piston edges, which maintain proper alignment of the suppressor with the bore upon firing, while minimizing friction with the piston tube during cycling. Cycling was smooth and reliable. The HEMS2 handled gracefully in close quarters.

Fired wet as intended, the suppressed USP45-Tactical with HEMS2 suppressor seemed as stealthy as HK’s impressive MP5SD integrally suppressed submachine gun. That’s newsworthy. Many armed professionals use the MP5SD as their benchmark or gold standard for outstanding suppressor performance. One begins to see why the HEMS2 is such a highly regarded tool among suppressor cognoscenti.

To provide hard data on the performance of the HEMS2 sound suppressor, I measured suppressed and unsuppressed sound signatures using Black Hills 230-grain FMJ ammunition. This is my standard test ammunition in all available calibers because of its accuracy, consistency, and overall quality. I also like the fact that agencies and individuals can order Black Hills ammunition factory direct if it is not available locally. Unsuppressed .45ACP gunshot noise averaged 162 dBs, measured 1-meter to the left of the muzzle. That’s nearly as loud as a 5.56mm M4 carbine or .308 sniper rifle. Adding the HEMS2 suppressor (shot dry) dropped the gunshot noise down to that of a .22 rifle. Add a small squirt of water from a hydration bladder to the rear of the suppressor, and .45 caliber gunshot noise dropped into the performance range of HK’s MP5SD integrally suppressed submachine gun. That’s .45ACP terminal ballistics with 9mm, world-class stealth.

Final Thoughts
Established in 1994 by Joe Gaddini, who had been a design engineer for Knight’s Armament Company, SWR quickly became known for innovation in the realm of sound suppression. His crowning achievement came in June 2002, when he filed a patent application for the Omega baffle system. When new owners William Ellison, Henry Graham, and Matt Pallett took over SWR in 2006, they moved the operation to Laurens, South Carolina, and quickly improved the performance of the entire product line. Already known for excellent customer service, they raised service to a new level. The HEMS2 suppressor reflects their passion for excellence. Handsome, reliable and user-friendly, the HEMS2 suppressor delivers a .45ACP punch. It is safe to say that is outstanding performance. 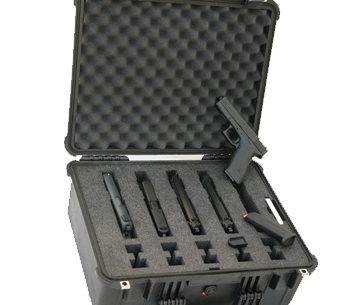 SWR’s latest .45 caliber pistol suppressor combines impressive sound reduction with one of the…