Already successfully deployed by the U.S. Navy and Joint Force EOD (Explosive Ordnance Disposal) warriors in Iraq and Afghanistan to check out potential IEDs and VBIEDs, the Honeywell T-Hawk MAV (Micro Air Vehicle), is now being used by the Miami-Dade Police Department. The T-Hawk MAV system (for tarantula hawk, a spider wasp that hunts tarantulas) provides the Miami-Dade Police Department (MDPD) enhanced protection for its officers and citizens with the ability to provide short notice and mission-specific, tactical airborne surveillance.

Obtained with federal grant funds, the MDPD T-Hawk MAV is used as a daylight-only flying camera to support specific operations for the Miami-Dade SRT and in-progress incidents, and will not be used for anything else in Miami-Dade County. Only the Honeywell-trained, licensed pilots of the MDPD aviation unit, who also fly the department’s rotary and fixed-wing aircraft, operate the MAV. One of the MAV operators and a pilot in the aviation unit, Sergeant Andrew Cohen notes, “The MAV is being integrated into the operational capability of the MDPD SRT and will not be used except for active scenes and callouts. The MAV will be used to provide real-time surveillance in support of specific law enforcement activities to see the threats facing officers. It will help lessen the danger to officers during high-risk activities by supplying oversight of tactical situations. It will allow the SRT team commander the ability to direct the SRT while viewing the areas that they will be moving into.” Situational awareness for a commander doesn’t get better than this. 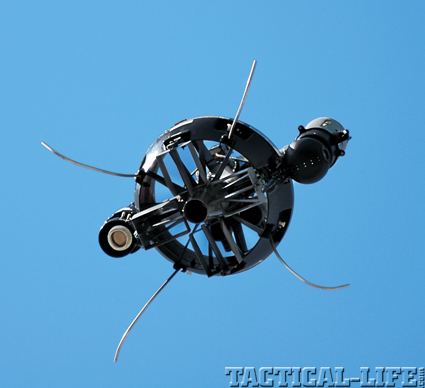 The T-Hawk can hover and “stare,” powered by a ducted fan and two-stroke engine.

Marvelous MAV
The Honeywell MAV system consists of two air vehicles and a ruggedized laptop ground station that controls the MAV and either records or sees in real time what the MAV camera “sees.” Each MAV is a circular, ducted-fan unmanned aerial vehicle, weighing 17 pounds with a 14-inch diameter blade. It is powered by a conventional two-stroke engine fueled by aviation gas (Avgas). Far from being stealthy, the two-stroke engine creates a similar but louder sound compared to its namesake, the tarantula hawk wasp. Cohen says that it is as noisy as a flying weedwacker and that it has actually made people flee the area when the MAV approached! Although designed to be man-portable, the MDPD’s MAV is transported to the crime scene by a dedicated truck or van and can be rapidly assembled, fuelled and prepared for flight in 10 minutes, something that is constantly practiced to maintain proficiency by all the pilots of the MDPD aviation unit.