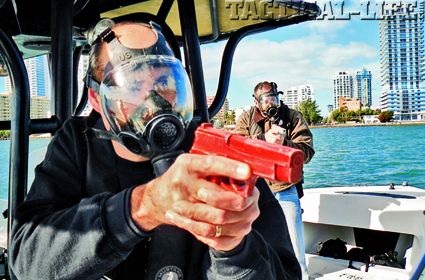 The throttles of the patrol boat are pushed flush with its console as it speeds through Florida’s Intracoastal Waterway in pursuit of a robbery suspect aboard a powerful speedboat. Thinking water would provide an easy escape was a mistake for the fleeing criminal, and the chase is quickly ended as the boats come together and officers jump over the gunnel with their sidearms drawn, slamming the robber to the deck.

To safely perform these high-speed maneuvers and effectively put rounds on target in a marine environment, it takes specialized training like that provided by Tactical Advantage Consultants (TAC) out of Miami, Florida. TAC’s instructors are all current or veteran marine patrol supervisors with decades of experience policing both inland and offshore waterways. Bobby Knight, a retired captain with the Florida Fish & Wildlife Commission, founded TAC in 1986 to address deficiencies he saw in the training of officers assigned to marine patrol. Despite their unique and dangerous operating environment, the only training courses offered to most officers are publically available boater education courses that cover basic safety topics—they fail to address law enforcement-specific concerns like adapting arrest and defensive tactics to vessels. When it comes to chasing and stopping fleeing boats, there are almost no options available to prepare officers.

The Marine Patrol Officer Course is TAC’s remedy for this lack of maritime-focused training. Over five days, its participants receive much more than an introduction to boating. Day one begins with a short classroom discussion of the week’s schedule and assignment of crews before students head for the dock and the host agency’s patrol boats, where they will spend the remainder of the week. After a brief familiarization with the specific controls and casualty procedures of their boat, each crew motors out to safe water and instructors brief them on the first exercise. Without brakes, initiating a stop on a suspect’s moving vessel can prove hazardous, as collisions between the officers and suspects become a real possibility. TAC instructors make this the subject of their first lesson as they direct officers to pull up outside the suspect boat’s wake and hit the lights and siren before bringing their speed down at the first sign of compliance. Felony stops are the next logical progression, and TAC does a good job of getting students to put guns on target when the level of crime requires it. Staying at the outer edge of their weapon’s effective range, officers observe and cover the suspects as they issue commands to get them in position for applying handcuffs. With the advantage against a kneeling, crossed-leg suspect, officers move in and board the vessel to gain full control. 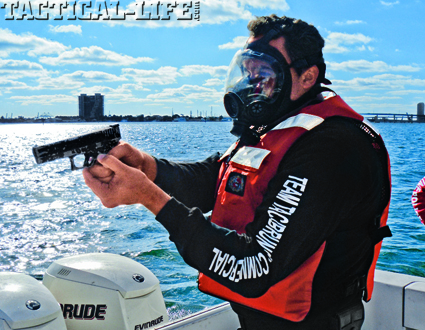 Shooting from a boat is difficult even for experienced marksmen and requires specific strategies to mitigate negative effects moving water has on stance and sight picture.

Though drawing a weapon and aiming it at a suspect will cause their compliance in most circumstances, there is always potential for a fight. To build the skills necessary to win it, TAC tows a target boat rigged with mannequins to the training area. Environmental and geographic restrictions prevent live-fire sessions for most classes, but marksmanship is a primary focus in the course. Using Glock handguns with Simunition barrel conversions and FX marking rounds, officers retain the feel and function of an issued sidearm. Making accurate shots from a boat is difficult even for the most experienced shooters, as water moving under and along a vessel’s hull translates to constant movement of its deck, which pitches up and down and sways and dips to either side, affecting the shooter’s stance and ability to maintain sight picture—all basic fundamentals of marksmanship. TAC looks to help officers overcome these difficulties by first getting them underway and exposing them to the issues and then offering mitigation strategies to lessen the effects. Officers soon learn that leaning into their boat’s console or gunnel helps limit movement, and forward momentum through the water will somewhat stabilize the boat even in choppy seas.

Exercises become faster and more aggressive as the course progresses, with boat chases and close-quarter gunfights becoming the norm. Despite the chaos surrounding them, TAC instructs officers to bring order to the situation by following scripted actions aligned with standards of the National Association for State Boating Law Administrators (NASBLA). Each chase is dealt with using an established use-of-force framework beginning with verbal orders to stop, then, if ignored, the protocol escalates to less-lethal munitions, and when necessary, culminates with ordnance fired into the vessel’s engines. 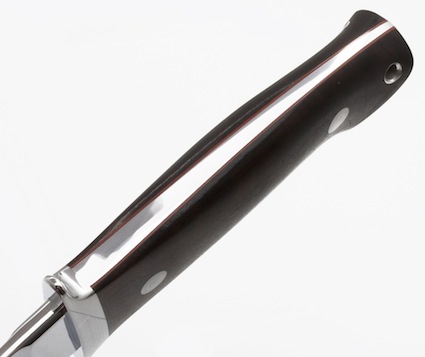 Shotguns are proposed as the best method for ending pursuits of the high-performance boats (or “go-fasts”) favored by drug and human traffickers throughout the Caribbean and for vessels that allow clear fields of fire to the engines. TAC recommends 12-gauge pump-action Remington and semi-automatic Benelli models as top selections for delivering both less-lethal and traditional rounds. Stingball ammunition, which has up to 18 rubber projectiles and will create a wide spread, is introduced as the preferred less-lethal option over fin-stabilized rubber slugs, as it offers improved chances of making hits, particularly when dealing with several suspects.

To punch through fiberglass cowlings and disable outboard engines, or do the same to a closed hull and the inboard engine it conceals, TAC suggests officers procure slugs, specifically sabot rounds composed of solid copper, to reduce the number of shots required to cause irreparable damage and force the stop. To exercise these capabilities, instructors allow full-speed pursuits with the officers firing Simunitions or less-lethal rounds into the target boat as its towed on an erratic course to simulate a suspect actively attempting to evade capture. When the decision is made to disable the vessel, officers close within a couple feet of their target and, with the shotgun’s barrel nearly making contact with the engine cowling, open fire and end the chase. Guns drawn, they board the disabled vessel, dropping suspects to the deck with physical techniques before handcuffing and searching them.

Though the above description covers their standard course offering, TAC’s training can be fully tailored to an agency’s needs, as illustrated by a 2012 course hosted by the Broward County Sheriff’s Department that focused entirely on airboat operations. Most of the officers assigned to airboat duty reported receiving minimal training specific to their boat and environment, despite finding themselves searching for violent criminals alone and far from backup in the alligator-infested waters of the Florida Everglades. With no training options specific to their platform readily available, the officers sought out TAC, which provided experienced airboat operators with law enforcement backgrounds to develop a curriculum and instruct. Many agencies have benefitted from TAC’s record of providing otherwise unavailable maritime training, including those responsible for port security in major seaports like the Miami-Dade Police Department, and more rural jurisdictions such as the South Dakota Department of Natural Resources, which patrols interior lakes and rivers. 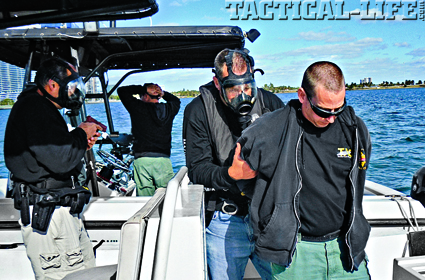 Handcuffing and searching suspects on a boat poses unique problems for officers who have to adapt their tactics to the confined and constantly moving deck.

If an agency staffs a marine patrol or is working toward building the capability, TAC is one of a handful of companies offering the professional training necessary to do it safe and right. For more information, contact Tactical Advantage Consultants at 305-899-7799.