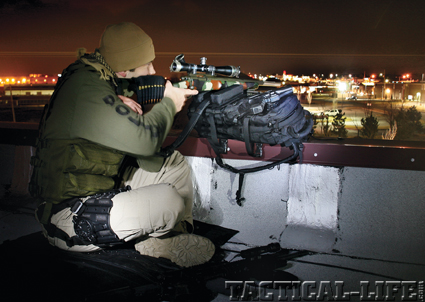 From the moment tactical precision rifle shooting started to gain popularity, controversy surrounding some of its integral elements appeared. Inevitably, the traditionalists and innovators clashed on whether or not various items of equipment were really worthwhile or simply the “cool” thing to have.

In all types of shooting, trendy items designed solely for commercial purposes abounded. It’s up to the individual shooter to examine what’s available and decide whether or not it fulfills his needs. To the detriment of efficiency, too often the “cool” items are selected. The problem is that in a tactical environment, the degradation of efficiency caused by errors in selection can be fatal.

Bipod
One item that falls into this category is the bipod. In theory, at least, the bipod has much to offer, but in actual practice, its limitations quickly surface. First of all, it doesn’t produce maximum accuracy on hard surfaces because it “springs” when the rifle is fired. Second, regardless of surface, for this same reason it doesn’t handle calibers that generate substantial recoil. Third, with many rifles, it seriously alters point-of-aim/point-of-impact, thus making it mandatory that in order to maintain his zero and range calibrations, the shooter must use it exclusively. As often as not, a bipod will often raise the point-of-impact substantially, limiting the weapon’s tactical versatility. This is why many sharpshooters choose not to use it. 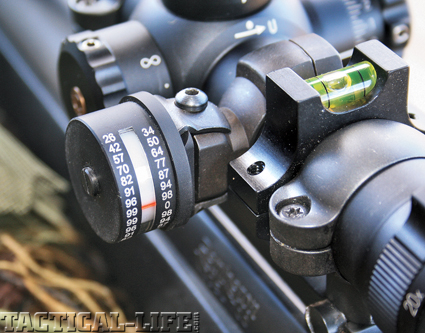 Two critical pieces of ancillary equipment are an anti-cant device and angle cosine indicator for up- and downhill shooting.

Two items that without a doubt positively influence performance are the anti-cant device (ACD) and angle cosine indicator (ACI). Both mount to either the scope or base and completely remove the guesswork from the shooting equation. The ACD is basically a bubble-level that insures the rifle isn’t canted, thereby guaranteeing shot-to-shot consistency — something critically necessary for effective zeroing, obtaining your distance calibration data and actual field shooting.

I proved this point irrefutably during the field phase of a recent American Small Arms Academy (ASAA) Tactical Precision Rifle Course. I asked the five most skilled TPR shooters in the class to aim at their targets (steel silhouettes measuring 16×30 inches with a 6×6-inch head) 600 meters away. Then, without using their ACDs, I asked them to make absolutely certain their rifles were level. The results were amazing. When I looked at the ACD of each shooter in turn, canting errors of from 4 to as much as 10 degrees were evident. This means nearly all of them would have missed, but by using an ACD to insure their weapon was level, all would have hit their target solidly.

An ACI gives you the up- or downhill angle in either degrees or a percentage of your line-of-sight (LOS) range. And, since rifles shoot significantly high at any serious up or downhill angle, knowing the true ballistic range (TBR) allows you to set your scope for the appropriate range and get the hit.