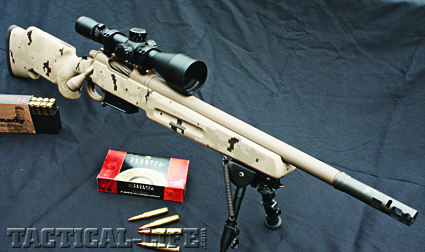 Back when the MOA standard became vogue and folks started rating rifles as “1 MOA,” a rifle sold as “sub-MOA” was pretty impressive. MOA is actually a bit subjective; I believe Jeff Cooper once said if you are worried about tight shot groups, fire one round and measure from center to center. Some folks will fire three shots and call it good, some fire four and subtract one to minimize human error, some will shoot five and deduct one for the same reason.

Whatever the preferred method or standard, when you hear this rifle or that advertised as an “MOA gun” the maker is telling you that it will shoot consistent groups into an inch from 100 yards. Manufacturers often proof their precision rifles by benching them in some sort of gun vice or from sandbag rests.

Tactical Rifles guarantees their rifles to hold ½-MOA when fired from a sandbag rest with match grade ammunition. That’s a pretty bold claim, but when you build rifles from the ground up you can not only make that claim but you can back it up.

Gun Details
For years Tactical Rifles has been building quality bolt and semi-auto guns using some of the best parts available from a variety of vendors. While they still purchase many items from outside vendors, Tactical Rifles now manufactures many of their own components in house.

Featured on this rifle is the brand new Chimera action manufactured by Tactical Rifles. The robust, stainless steel, match grade receiver incorporates a dual-lug, spiral cut fluted bolt. An “over-sized” tactical bolt knob is found on the handle. Atop the action is a Mil-Std-1913 Picatinny scope rail. The bolt release is found on the left rear of the receiver.
At the base of the action you will find Tactical Rifle’s own heavy-duty floorplate with triggerguard. The floorplate accepts a detachable 5-round magazine that is standard. Shooters can order a 10-round version keeping in mind that it does stick out of the base a few inches. 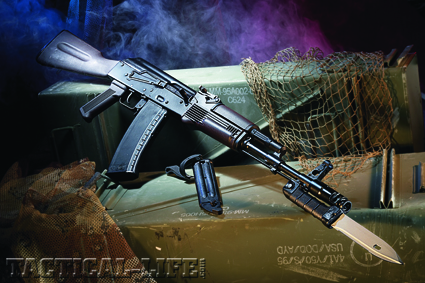