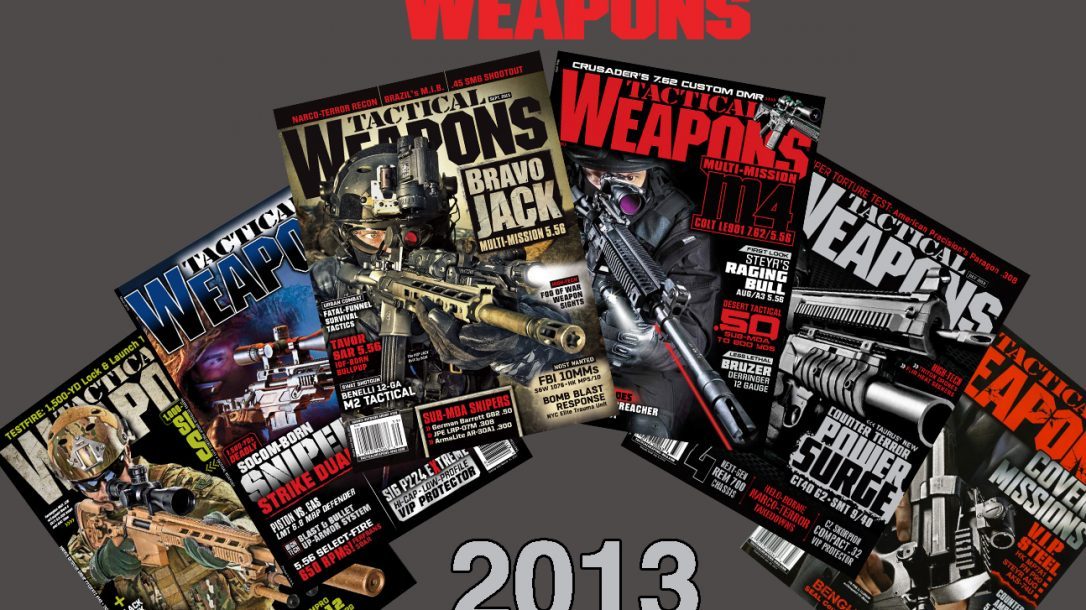 TACTICAL WEAPONS is the bi-monthly magazine that lets its readers become virtual “insiders” in the world of tactical operations against terrorism, crime, and aggressive military action on freedom’s frontiers. Here’s a look back at what we covered for our readers in 2013…

Tactical Weapons January 2013
Covert missions and VIP security detail steel was the theme of our January 2013 issue. While FN’s super-compact P90 in 5.7x28mm was the star of the cover, other notables inside the cover story include: U.S. Secret Service MP5s, the AKS-74U, Steyr’s AUG and the HK MP7A1. Small rifles—big bite!

Tactical Weapons March 2013
The 1,500-yard-capable precision rifle being fielded on the cover is the Drake/Cadex Strike Dual in .300 Winchester Magnum. TW is proud to give readers a first-look at Drake’s beast—a near facsimile of the U.S. Army’s M24E1—even before our military fields their first one!

Tactical Weapons May 2013
Operators looking for that do-it-all package should find the new Colt M4 LE901 all that and more! The modular carbine can quickly change its capabilities—it converts easily from 5.56 to 7.62 caliber. We found the conversion system to be extremely clever—and extraordinarily cost-effective for budget-conscious law enforcement agencies.

Tactical Weapons July 2013
Dual-gun thunder at its finest! Taurus Brazil gave TW the cover scoop on its CT40 G2 but with a bonus…riding shotgun was the LT3840 Grenade Launcher. And the hits keep on coming—the CT40 G2’s little subgun brothers were also featured in the cover story. All in all, the new rifles from Taurus are bound to make an impact on warfighters’ ability to counter terrorists wherever they strike.

Tactical Weapons Sept. 2013
Bravo Company Manufacturing (BCM) partnered with Haley Strategic Parters (HSP) on the JACK Carbine. The 5.56 JACK featured on the September 2013 cover was fielded by Travis Haley himself. Haley worked closely with BCM to produce a true, multi-mission masterpiece. We hope BCM and Haley approve of the new name TW gave to the carbine…Meet the JACK HAMMER in this issue!