Among the greatest of the unsung heroes in the Global War on Terrorism are the U.S. Air Force Pararescuemen. The story of the PJs can be summed up by their motto, “These things I do that Others May Live.” Their mission is to risk their own lives conducting rescues in remote areas or behind enemy lines. Neither hazardous terrain, inclement weather, incredibly rough seas, nor the determined efforts of the enemy will stand in the way of their rescue operations. PJs have an incredible record of successful rescues under the most difficult conditions.

When a U.S. Air Force pilot bailed out of his stricken aircraft over Serbia in 1999, USAF pilots flying two MH-53J Pave Low helicopters and one MH-60G Pave Hawk helicopter transported two PJs and a Combat Air Controller through Serbian rocket and small-arms fire to rescue the pilot behind enemy lines. Even when the downed pilot was safely extracted from behind enemy lines and onboard the Pave Hawk helicopter, one of his rescuers physically covered him with his own body to further protect the aviator from possible harm while the flight of three U.S. Air Force helicopters returned to friendly airspace. This entire combat rescue operation is a perfect example of the PJ mission.

According to one estimate, approximately 750 people have been rescued to date by U.S. Air Force PJs serving in Iraq and Afghanistan. Unfortunately, of the 450 PJs in active, reserve and National Guard service, several have been killed since combat actions began in the wake of 9/11.

Air Force Pararescuemen are some of the most highly trained and successful Special Operations warriors in the arsenal of democracy. Ironically PJs usually receive the least amount of publicity, which means the general public knows very little about their missions and their accomplishments.

Created to conduct search and rescue operations, PJs operate on a doctrine that was actually based on rescues successfully executed by U.S. Army Air Corps personnel during World War II and by members of the newly formed U.S. Air Force in the post-war years. During the Korean War U.S. Air Force rescue personnel honed their skills to perfection while saving hundreds of lives. When the United States became embroiled in the Vietnam War, U.S. Air Force PJs continued to risk their lives so that others may live.

Always There, Always Effective
Since then, PJs have served with great distinction during peacetime rescues and in every conflict, peacekeeping mission and war involving U.S./Allied/NATO and Coalition personnel. When the United States goes to war, one unit that is always present is a combat search and rescue element of the U.S. Air Force, which includes Pararescuemen, Combat Rescue Officers and aviators. In 2001 the U.S. Air Force created Combat Rescue Officers. A CRO is a commissioned officer who successfully completes the same training as an enlisted PJ except for the intensive medical training. 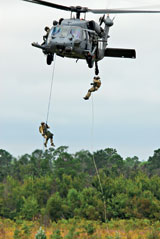 Since their inception, the PJs have evolved from a rescue force with extensive medical credentials, to a tightly knit group of high-speed, low-drag Special Operations warriors. This evolutionary process took a giant step forward when the PJs were brought into the Special Operations community and they started to be incorporated into different types of Special Forces missions such as those executed in Somalia.

A legacy mission for the PJs involves being inserted into a crash site or search area by helicopter to rescue downed aircrew personnel. In other situations, PJs may swim, parachute or rock climb into a search and rescue area. An operation like the kind made famous by the movie Black Hawk Down is a perfect example of a Special Forces extraction mission that the PJs took part in, which required these brave air commandos to go into harm’s way with ground forces.

By the time the U.S. entered the Global War on Terrorism, Air Force PJs were participating in their normal rescue missions and in joint operations with Special Forces units. PJs have also rescued lost or stranded civilians. During one rescue mission in Arizona, Air Force PJs accomplished in a matter of hours what other rescue personnel were unable to accomplish in a much longer period of time.

Member of the Elite
The special operations forces community welcomes PJs into their fraternity because PJs are highly trained trauma medics who are also trained operatives. Special Operations personnel from the U.S. Army and Navy need skilled combat medics who can function in the SpecOps world. This means highly trained trauma medics who can parachute, swim, creep, rappel, walk or drive into a hot spot to accomplish a high-risk mission at any hour and not be phased by the fact that they may have to engage superior numbers of enemy combatants who live for the day when they can skin a captured American alive.

U.S. Air Force PJs shoot, move and communicate with the best trigger pullers in the Special Operations community and they do so with a medical bag strapped to their back. These guys are a cut above your average medic and they prove it every time a PJ makes a house call behind enemy lines to save wounded or injured U.S, Coalition or NATO military troop.

The United States Air Force has spent considerable money sending PJs to various well-known private training schools in the U.S., a good example being that of Mr. Richard Batory, a former lieutenant and firearms instructor with the local sheriffs department who also served in the Polish resistance during the Cold War.

When PJs train with Batory they train to shoot, move, communicate, stabilize wounded, evade the enemy and evacuate the area. In fact, according to one veteran PJ, Batory’s training is actually preferred because Richard Batory specifically designs his firearms and tactical training (when appropriate) to fit the specialized duties of a pararescueman. It is fortunate to have a trainer with Richard Batory’s credentials within driving distance of David Monthan Air Force Base, AZ.

Pre-Deployment Training
Teaching PJs how to shoot is not necessary because the Air Force conducts firearms training for PJs when they go through basic training and when they attend their 25-week, extremely demanding PJ training course. Batory’s job is to help PJs develop their tactical skills to a more advanced level, to include responding to an ambush and repelling a ground attack by a numerically superior enemy force while caring for rescued military personnel. In other words, Richard Batory’s pre-deployment training course helps sharpen the tip of the spear so the PJs can maintain an edge over the enemy in combat.

Operating in small groups, PJs also train to use their tracked Honda ATVs to rescue injured or wounded personnel under fire, to sharpen their reaction time when shots are fired and to disarm an adversary armed with an edged weapon. PJs are also taught to hone their CQB gun-fighting skills with the M9 pistol and M4 Carbine.

When Batory trains his PJs he likes to bring his son Eric along because his oldest son is a decorated former U.S. Army Ranger combat medic who served with great 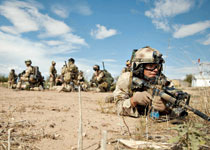 distinction during some of the fiercest fighting in Iraq. Eric’s job is to offer advice and make meaningful recommendations when the PJs train to treat wounded and injured personnel under combat conditions.

Eric is best known for complicating training scenarios in a very realistic fashion by pointing to a PJ and saying, “He’s down with a double amputation below the knee, what do you do now?” Eric will also share some of his real-world Ranger experiences with the PJs when he tells them to be more aggressive when reacting to a mock attack. It’s at moments like this when Eric is most useful in helping the PJs transition from being a highly skilled medic to a commando.

Training with Enemy Weapons
Richard Batory also utilizes the services of Larry Kotz, a Class III Dealer and Firearms Instructor and Walt Puczkowskyj a Class III Dealer and Retired Vietnam era U.S. Marine from C&T Enterprises, to help teach the foreign/enemy weapons familiarization class to the PJs. During this portion of their pre-deployment training PJs also get in some trigger time with the foreign/enemy firearms they will most likely come in contact with while serving in Iraq, Afghanistan, Africa and other hot spots. Batory’s youngest son Adam also serves as a pre-deployment training facilitator and assists his father in various ways.

When one considers that only 13% of all PJ candidates pass the eight-week indoctrination course, it is easy to see that PJs are truly elite Special Operations warriors. PJs are incredibly humble and are not very comfortable speaking about their life-saving achievements, especially in combat. These guys are doers not talkers.

In one famous combat action in Afghanistan two PJs were decorated, one posthumously, for rescuing 10 American servicemen after surviving a fierce ground combat action with enemy combatants. During this combat search and rescue mission, one PJ was killed and one survived after they stabilized the wounded, established a second collection point for the wounded while under attack, helped defend the LZ and cared for those killed in action. In another rescue mission in Afghanistan it took a contingent of PJs two hours just to make it to the crash site and another four hours to stabilize the more seriously injured personnel while also preparing those who died for evacuation.

Serving The Nation
Pararescuemen also perform humanitarian missions and conduct rescues during natural disasters. Very little has been mentioned about the unsung heroes from the 943rd Rescue Group, which included pilots, PJs, aircrew and support personnel from the 306th and 304th Rescue Squadrons from Tucson, who rescued 1,043 hurricane victims under arduous conditions in the wake of Katrina. During these missions, U.S. Air Force rescue personnel operated helicopters in congested airspace without the benefit of air traffic controllers, hovered helicopters for long periods of time, waded through polluted water to retrieve victims and operated a hoist close to power lines to affect rescues.

It takes more than two years to train a PJ and less than a second for a Pararescueman to lose his life while performing his duties. Remember this the next time you hear that U.S. troops are being deployed in harm’s way, because every time U.S. military personnel deploy for war, a contingent of U.S. Air Force PJs go along.

Making Contact
For more information on Richard Batory’s specialized training operation, he can be contacted at rbat7777@msn.com.