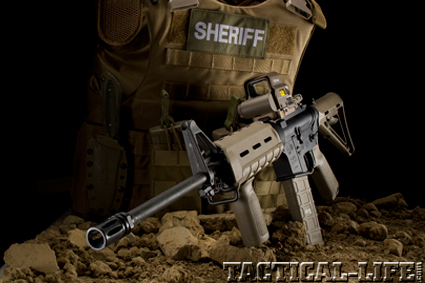 1 of 10
5580
The Colt LT6720MP-FDE is a custom 5.56mm carbine built for TALO Distributors with Flat Dark Earth Magpul upgrades, a 16.1-inch, lightweight barrel and top-notch reliability. 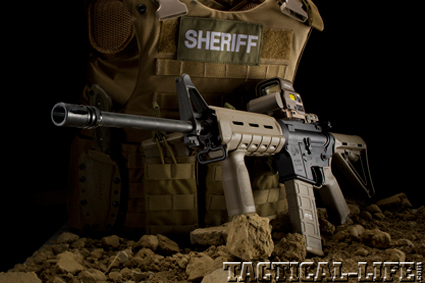 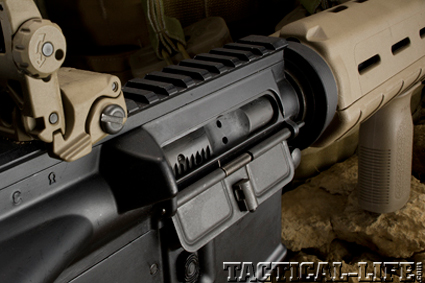 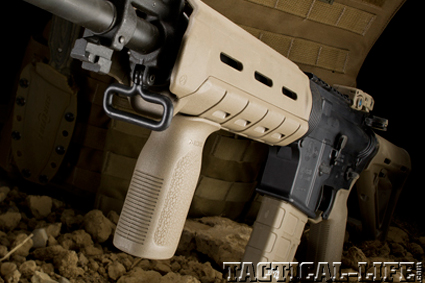 4 of 10
Forend
The Magpul MOE handguard protects the hand from heat and can be fitted with accessory rails. Magpul’s vertical foregrip was also included. 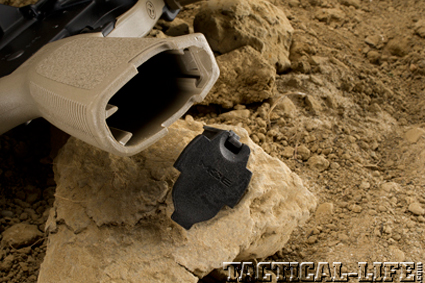 5 of 10
MOE
The hand-filling, polymer Magpul MOE pistol grip is textured to provide more control and features a storage compartment. 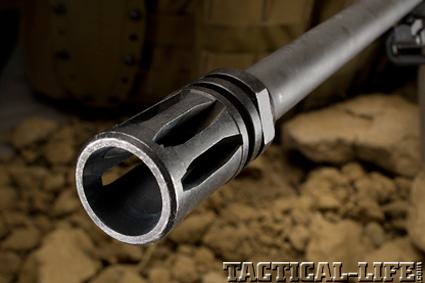 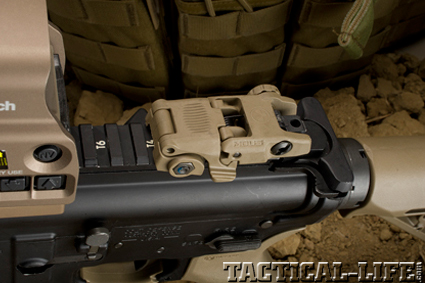 7 of 10
Rear-sight
The carbine comes with a dual-aperture Magpul MBUS backup sight that can be flipped up easily with the single push of a button when needed. 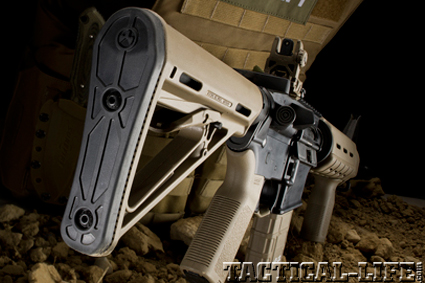 8 of 10
Stock
Another Flat Dark Earth addition, the MOE buttstock has an A-frame profile that resists snagging and protects the adjustment latch. 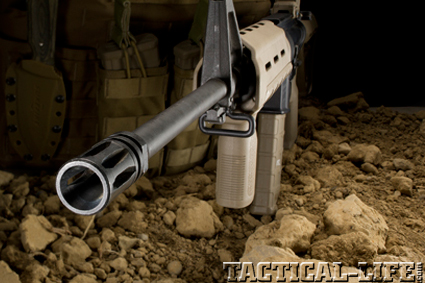 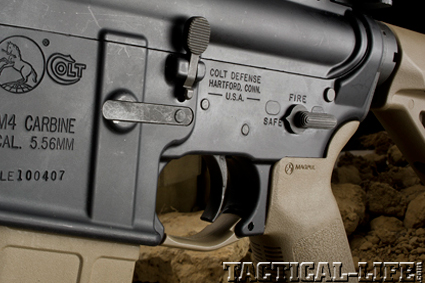 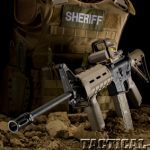 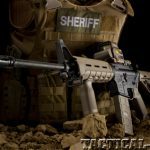 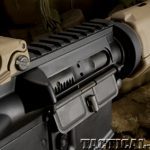 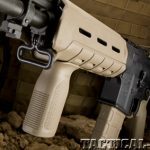 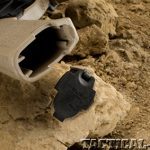 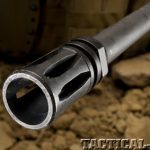 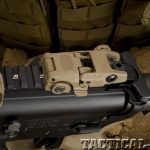 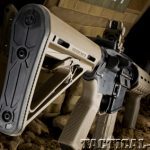 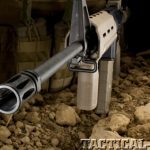 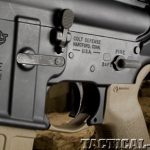 Patrol officers don’t walk the beat much anymore, as most patrolling is done in motor vehicles. Still, every ounce you add to a patrol rifle is more weight you’ll have to carry, whether it’s on an extended assignment or on-foot deployment. We can cut weight in certain areas, and one of those is appropriately the barrel. Police officers don’t lay down volumes of fire in “free-fire zones,” nor is the patrol rifle meant to cut the button off a man’s shirt at 600 yards. Unless you have to mount an M203 on your patrol rifle (which is unlikely), you don’t need a heavy barrel with grenade-launcher cuts.

It is important to remember that the patrol rifle, or carbine, ideally fits a number of roles in the peace officer’s mission. First, it gives first responders a degree of power beyond the handgun. Next, it extends the effective range of that power. Finally, it provides that extra power without increasing the likelihood of target perforation—we want the round to stay in the target if possible. The carbine should largely operate like a service pistol. As an example, I’ve seen several officers at a fairly large agency’s annual shotgun-familiarization seminar firing a shot on target and then trying to pull the trigger again, as if the shotgun were a semi-auto. Unlike the issued sidearms, all of them semi-automatic, the shotguns were pump actions. Most carbines, however, fire a round with each pull of the trigger until the cycle of operation ceases for some reason (stoppage, empty magazine, etc.). With carbines, users are taught to keep the firing grip in place on the pistol grip while the non-shooting hand runs the charging handle—similar to a pistol’s operation. And both pistols and carbines operate from detachable box magazines.

This commonality serves the user of the patrol rifle well. In the current environment, where so many cops have served military tours in the Global War on Terror, many have already used the AR’s siblings, the M16A2 and M4/M4A1.

Our police first responders have always faced situations that call for a rifle. The news these days shows that our current crop is still facing tough elements such as active shooters, barricaded suspects and violent drug gangs. The cops need rifles. We just need to be smart and get them what they really need—and in my opinion, what they need is a light and handy carbine that is extremely reliable.

When the people at TALO Distributors asked Colt to construct a distributor-exclusive lightweight patrol carbine for them, Colt responded with the LE6720, a skinny-barrel AR-15 with a flattop upper. Then TALO wanted Magpul MOE furniture installed, including the pistol grip, handguard, triggerguard and collapsible stock. Even Magpul’s MOE vertical foregrip and a rear MBUS backup iron sight were included. While the carry handle doesn’t ship with the rifle, one Magpul 30-round PMAG is included.

With the distributor-requested modifications, the Colt LE6720 became the LT6720MP, and with the furniture in the currently popular Flat Dark Earth color, the rifle became the LT6720MP-FDE. In my opinion, this handy little carbine fills the already-described
LE patrol carbine role extremely well.

Marked “M4 Carbine” from “Colt Defense,” the LE6720 differs in barrel length, barrel profile and fire control group (it is strictly a semi-auto) from the military’s M4. The carbine has a 16.1-inch, lightweight barrel with a 1-in-7-inch right-hand twist rate and a chromed bore that’s rifled with six grooves. The front sight is adjustable for elevation. In original trim, the LE6720 weighs in at a feathery 6.2 pounds unloaded. The carbine has a 5.56mm NATO chamber. (Some commercial AR-pattern guns have .223 Remington chambers, which is an issue if a 5.56mm NATO round is fired in the tighter chamber.) The barrel is made in-house from 4150 steel, while the receivers are made of forged aluminum and hardcoat anodized.

The barrel has been high-pressure tested and magnetic-particle inspected in accordance with military specifications. Similarly, the bolt is shot-peened, high-pressure tested and proofed, and magnetic -particle inspected. The castle nut and the bolts holding the gas key to the carrier are properly staked. The barrel extension and upper receiver have GI M4 feed ramps. The LE6720 is tested according to the military technical data package. As the parts all shuttle across one production line, it’s easier to meet one standard for all rifles.

Magpul MOE furniture in Flat Dark Earth was provided for my test gun, the LT6720MP-FDE. The carbine came with two 30-round PMAGs. (As with many of Colt’s LE carbines are shipped with 20-round aluminum magazines, I had hoped the test gun would ship with a 20-round PMAG.) A sling, cleaning rod, bore brush, chamber brush and manual were among the extras provided. The Magpul MOE vertical foregrip and mounting hardware were found in the polymer bag of goodies.

It’s clear that the thin-barrel patrol carbine is not intended to excel at the task of benchrest shooting, but rather to provide good accuracy out of a portable and handy package. However, that does not mean they won’t shoot well. The trigger of my test carbine, with an average pull weight of 7.34 pounds, is in no danger of reaching the minimum M4 standard of 5.5 pounds. Still, it’s a clean trigger with little take-up before the weight, and it presses clean throughout.

With a Leupold 4.5-14x50mm Mark 4 LR/T riflescope installed in a Warne mount, the LT6720MP-FDE weighs slightly less than 7 pounds. That’s the good news and the bad news. A 4.5-14x50mm scope, the Leupold is a lot of glass for a little carbine—a tail wagging the dog. It was interesting to see the impact it had on the accuracy testing at 100 yards. Velocity measurements were taken by a Shooting Chrony placed 15 feet from the muzzle.

I used Champion/Shooter’s Ridge Gorilla sandbags up front and Monkey sandbags to support the rifle’s stock. With the toe of the collapsible stock in contact with the small sandbags, getting shot-to-shot repeatability was a stretch. The rifle, ammo and optic worked beautifully, however. The carbine was quite accurate. After I pulled the optic off, the LT6720MP-FDE and I made a trip to the police range.

To see how the light barrel concept sat with cops, I went to the police range on the day their firearms instructors were doing the wind-up to the annual in-service. As soon as the Colt came out of the bag, smiles appeared. Handling the nice, light carbine made believers of them all. Lieutenant Chuck Haggard soon put a target up and checked the zero. After getting a few rounds on paper, he began shooting at various ranges. The drills were singles, pairs, failures and shooting on the move. He emptied the last magazine with a non-standard response drill. Pointing to the front of the Magpul MOE handguard, he said, “See how aggressive my grip was, how far forward? I nearly always get burned doing that, crowding the front of the handguard and getting my finger singed right at the base of the barrel sling-swivel area. But not with this.” Apparently, he’d never used MOE furniture before. I had a feeling that he’d be looking into it soon.

But how about the flyweight carbine? “It’s aces,” Haggard said. Then he had me come over to his patrol car. He withdrew an interesting Colt carbine. “It was a 6920 lower,” he said. “I was at a Colt Armorer school, told the instructor I was after a flattop upper with a light barrel. He went back to the factory and this is what I got.” The upper was a flattop, pencil-barrel setup just like the LE6720 (but made before the LE6720). Cops knew back then what was needed, and now Colt and TALO are providing it with the LT6720MP-FDE. To acquire one, ask your local dealer about its availability through select distributors. For more information on Colt, visit colt.com or call 800-962-2658. 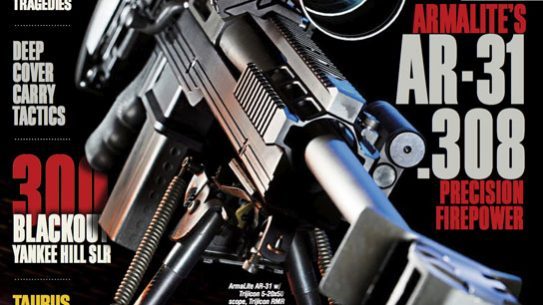 Patrol officers don’t walk the beat much anymore, as most patrolling is done in…