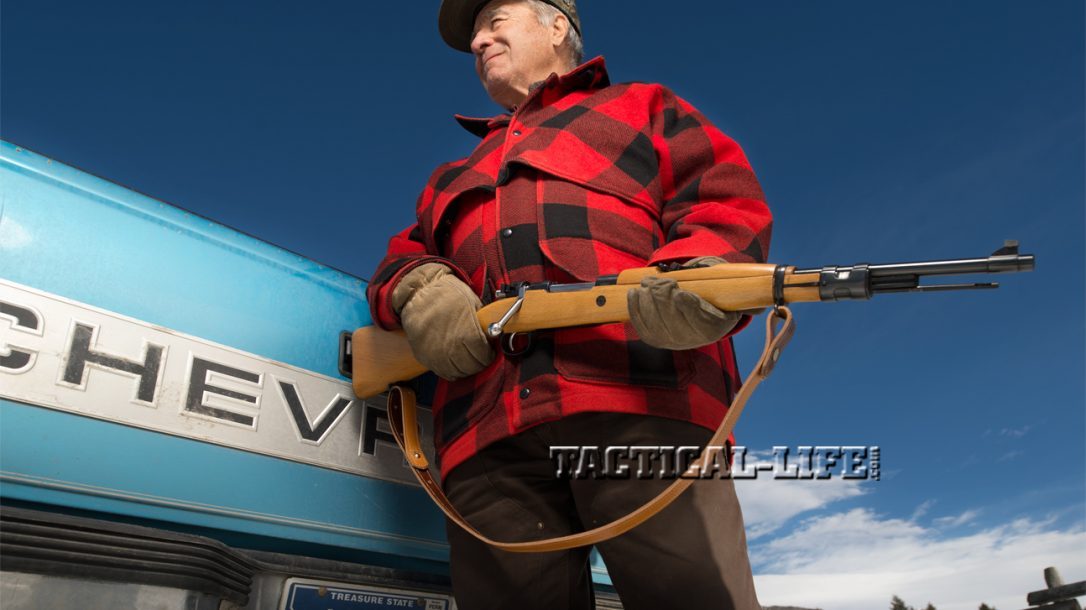 There are several generic terms in the world of gunnery at large that provoke an instant “Aha” nod of recognition. Say “pocket gun,” and virtually everyone within earshot will envision a small, lightweight gun compact enough to be comfortably carried in a pocket. Say “belt gun,” and most folks will know you’re talking about a larger handgun worn in a holster on a belt. “Scattergun” is a shotgun, “six-gun” is a revolver, “long gun” is not a handgun, “handgun” is not a rifle, and so on. Although its original application has declined substantially in use during modern times, the “saddle gun” term still brings up a certain automatic “Oh, yeah, I know that one!” response in huge areas of the country south and west of Peoria, Illinois. The popular flat-sided and quick-firing lever-actions ruled on horseback for many decades.

With the development of the first high-powered gas-motored machines capable of reaching unheard of speeds up to an eye-waterin’, ear-flappin’, hat-blowin’, hair-raisin’ 35 miles an hour, the saddle gun was smoothly retired for another great American tradition: the truck gun. Starting out, the truck gun was simply the saddle gun re-booted into the newer transportation technology; but as the truck progressed in sophistication and size, the truck gun became just about any rifle a rancher, farmer or hunter felt was the best tool for whatever uses to which the gun would be put. Today, the venerable levergun is still seen in truck racks where I live, but so are glossy scoped Weatherby MKVs and black AR-15 derivatives. Truck guns are anything you toss in your truck on a regular basis. My own preference in a truck gun is something fairly short, relatively powerful and absolutely reliable. Doing double duty as an ATV gun, it needs to be short enough to maneuver in and out of the cab or the roll cage easily, it has to have enough thump at the far end to handle anything from coyotes on up to small bears, it has to be quick-handling and it’s just flat gotta’ work. One-bangers are out of the question, but on the other hand it doesn’t need a 40-round magazine, either.

Mitchell’s Mausers has a great little truck gun candidate, one that combines one of the most respected rifle designs ever put to production, the German Mauser ’98 battle rifle, with the qualities essential to a truck-ready carbine. Enter the Model 63 Tanker.

Old Design, New Gun
“Tanker” was an informal term attached to shortened versions of main battle rifles for carry inside the cramped confines of battle tanks by tank crews. While there were some real “Tanker” versions of military rifles produced by various nationalities, many promoted as genuine original military issue during the past 30 years or so were never built or issued for actual armed forces use, and most were commercial attempts to cash in on supposedly rare rifles. Mitchell’s is best known for their long-running importation and sale of genuine vintage military Mauser variants, but with the rifle’s European sources drying up, the company has been looking at other approaches to satisfy fans of the classic rifles, and one result, the Model 63, is a completely newly built bolt-action Mauser in full military trim intended for the civilian market. Manufactured for Mitchell’s by Serbia’s Zastava, which has a long history of Mauser battle rifle production, the 63 is a near dead ringer for an original ’98 in its overall configuration, with the exception of its blond hardwood stock and short 17.4-inch barrel.

The little carbine has a very trim 37.2-inch overall length and weighs a solid 7.4 pounds. Every single bit of Paul Mauser’s 1898 action design is here, including the famed Mauser controlled-round-feed with sturdy twin front locking lugs on the bolt, the backup third lug toward the rear, the stout claw extractor, the ultra-dependable mechanical “blade” ejector, vented bolt body to handle ruptured case gases, the turned-down bolt handle, the three-position wing safety, the two-stage trigger, and even the clip charger receiver cut-out to “speedload” the five-round mag with its steel hinged floorplate. The metalwork is entirely in steel, and it’s all forged and milled just like the original Mausers were. No plastic, no aluminum, no castings, no shortcuts at all. Certainly, you can pick up a domestic entry-level bolt gun for far less than the Tanker’s $595 sticker price, but I can guarantee you it won’t be as solid in either build or pedigree as the 63; something like this little carbine couldn’t be done here in the U.S. any more at an equal price—the manufacturing costs would be too high.

The rest of the military package in­­cludes the extended stock forend and handguard (both shortened proportional to the barrel), sling swivel on the rear barrel band and buttstock, bayonet mount up front (no bayonet included) at the front barrel band collar, steel plate at the rear, and military inverted V front blade to match a V-notch rear tangent slider graduated for 1,400 yards—a bit of a stretch for the .243 offering, but I suppose you could lob ’em in eventually with the .30-06 version.

Modifications
Gun scribes don’t get to keep everything we test, and I certainly can’t afford to buy them all, but the little Tanker turned out to be one of those that couldn’t go back. It’s out-of-the-box usable, but to fine tune it for rough country duty it can benefit from some tweaking. In my case, after using several months ago one of the Rock Solid Mosin Nagant straight extended bolt handles on a Mosin sporter project and liking it immensely, I thought it was worth trying one on the snub-nosed Mauser. It’s much more accessible in a hurry and provides for better leverage than the 63’s shorter, curved factory bolt handle.

The second area is the traditional Mauser safety that rotates (stiffly) from left to right at the rear of the bolt shroud. Intended to be very positive and not easily knocked in either direction, it’s not the most ergonomically efficient setup for getting a bolt gun’s safety off in a hurry if needed when carried with a loaded chamber ready for instant action. The standard safety features OFF, half ON (middle position, trigger de-activated and bolt unlocked), and full ON (trigger de-activated, bolt locked) positions. Thumbing that safety OFF quickly while shouldering the Mauser in the face of a charging critter isn’t exactly smooth. Glen Chapman’s M-98 Swing Safety, available online, is a two-position replacement for the factory version that sits on the right side of the bolt shroud and swivels forward and backward in an infinitely more natural thumb motion. There are other aftermarket Mauser safeties, but the Chapman setup provides an OFF forward position and an ON rearward position that locks the bolt in place with the trigger de-activated. A locked bolt is moderately important with an extended bolt handle that can snag on various things such as upholstery, seatbelts, tree limbs and other brush. Even more important is having a locked bolt with a safety that clicks right smartly OFF as the carbine comes up on point. Since both modifications involved mach­­ining, the 63 was left with my longtime gunsmith Steve Barlow at Barlow’s Custom Guns. He surgically removed the existing bolt handle and grafted on the Rock Solid replacement and machined the Chapman safety to the bolt shroud. Once the work was done, the Tanker travelled to the old stone quarry for a little noise making.

Workhorse Workout
On an intermittently overcast autumn day with temperatures in the mid 60s, the little carbine was chronographed first with four commercial loads for velocity comparisons through its short barrel. Three popular .30-06 bullet weights—150 grains, 168 grains and 180 grains—showed comparatively minor losses over longer barrels despite the shorter bore, and all retained decent energy levels for most uses in the caliber. 100-yard accuracy testing was next, and while the 63 is no match gun, with a load it likes it can easily hold inside the 4-inch general standard for a hunting rifle. With a load it does not like much, as the chart shows, it can throw groups a bit wider. Always test your load of choice before depending on it in the field.

Two major observations early on in shooting were that the sights were a smidge off (averaging 21 inches high at 100 yards on the lowest rear setting), and the rear barrel band had a tendency to wander forward under recoil. Its retaining spring wasn’t milled correctly to do its job, which was an annoyance, but it was fixable later in about ten minutes with a file. Periodically re-positioning the band slowed testing down, but didn’t stop it, and after getting home from the session I discussed the issues with Mitchell’s. They were surprised to hear about both, and arranged for a taller front sight blade to be sent. The barrel band issue is an aberration that shouldn’t happen across the board with other Tankers. Shooting at a quick follow-up session with one of the 180-grainers and the new blade put three holes exactly 7 inches low. Mitchell’s says the elevation regulation should be right on with these guns, and if not, they do have varying replacement heights if needed. Time ran out on this review, but the rear sight has more than enough leeway built into it to compensate for a too-tall blade if I want to leave it as is. I can also get with Mitchell’s for an intermediate height blade, or I can use a lighter bullet weight to bring impacts up. I just may go for door number three and elevate the rear to compensate.

Otherwise, the military sights are not created for precision shooting, but they are built for rugged use. The action was slightly rough, but it’ll smooth up over time. For me, the Rock Solid bolt handle is a tremendous improvement, and Barlow’s installation of the $26 Chapman swing safety (with 50 LPI hand checkering added) is an even tremendouser improvement. The RS Mosin Nagant bolt handle, incidentally, runs $30, while the Chapman safety is $26.67, and the total costs for gunsmithing both were a hair over $300. Worth it? For Mauser fans like me, yes. The Tanker 63 is a powerful, brand new Mauser, with a rugged and compact design for easy travel. In the same size range as the classic .30-30 Winchester and equally classic .30 M1 Carbine, but with a much heavier punch, Mitchell’s little mini-Mauser is a natural for dusty roads and truck racks just about anywhere. For more information visit mauser.net or call 714-596-1013. 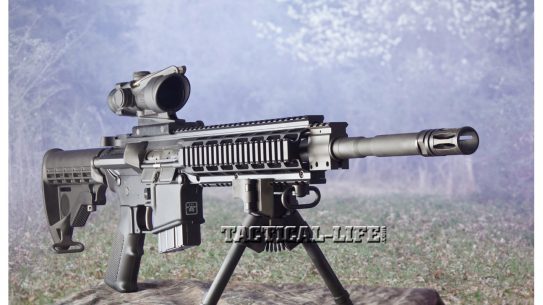