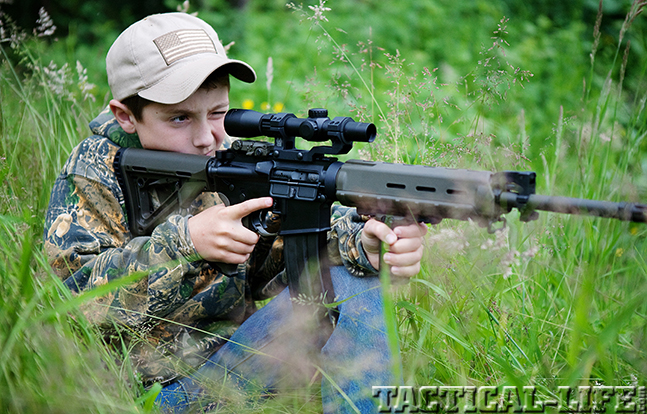 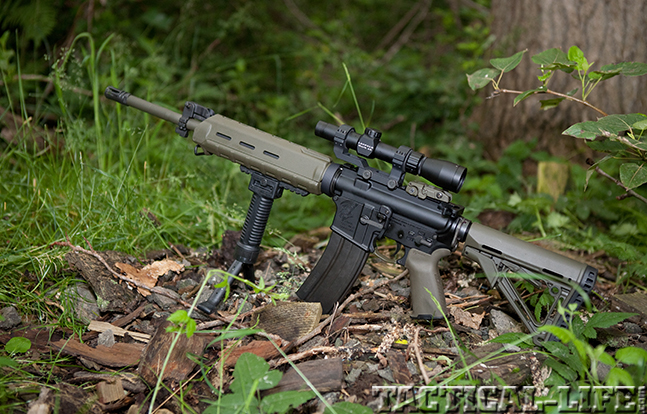 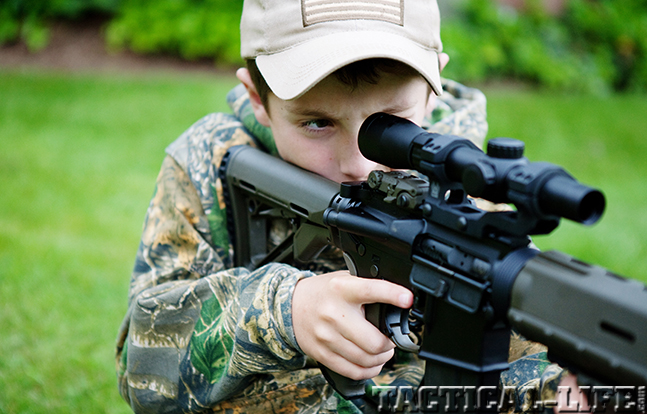 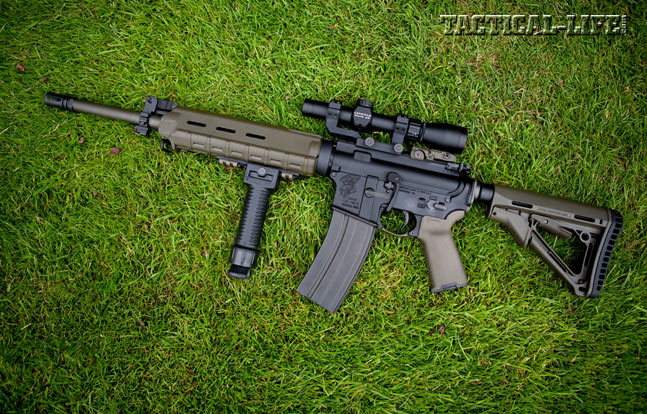 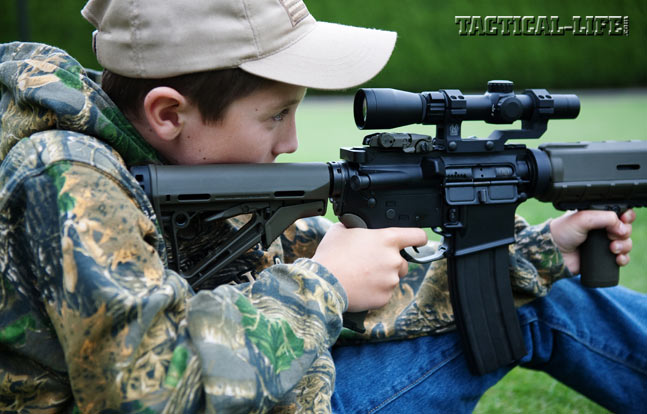 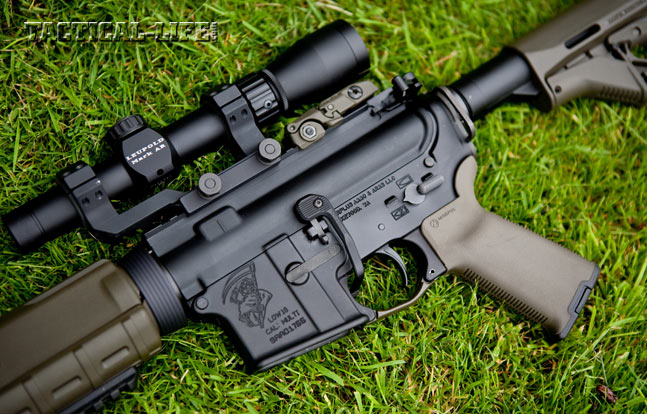 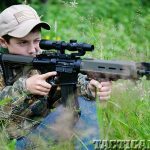 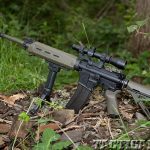 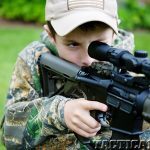 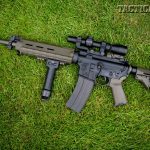 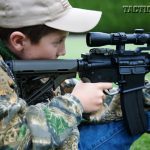 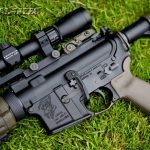 The time came in every hunter’s life when we finally reached that magic age and, after much waiting, got our chance to hunt deer. For most of us, this was the first big game we had the opportunity to hunt. Those first opportunities come when the cold northern winds begin to chill the air, footballs fly and nature begins to turn into those marvelous colors that foretell the coming of fall and—more importantly for us hunters—deer season.

As fathers, one of the most important steps that we take is to provide an appropriate deer rifle for our sons and daughters. From the .243 to a .30-30 caliber, or some less common calibers and rifles, our kids have tried a number of first deer rifles, many of which have been hand-me-downs. After all, at the rate kids grow, it’s only a matter of time before Junior will grow and need a full-sized rifle.

I somewhat sadly remember my own fears of hair triggers, sore shoulders and the world’s stiffest Marlin .30-30 lever-action rifle. I started weight training after school—not for sports, but to handle that .30-30 confidently. Although I grew into that Marlin in the coming years, by the time I was 18, I was carrying an M16A2 every day in the U.S. Marine Corps Infantry.

Unlike that .30-30, I appreciated the weight of the M16A2 and ease with which I handled it. Being an expert shooter year after year, I grew fonder of the AR platform over my career. I recall thinking that it would make an excellent deer rifle as a result of its weight, size, accuracy, durability and the ease in which it could be skillfully handled.

I have carried the M16A2 and M4 (with and without an M203 grenade launcher) and other variants of the AR platform during my career in the Marines and in my current endeavors. Having now carried an AR variant for the past 25 years, the weapon system feels as comfortable in my hands as an old pair of field boots. As my love of the AR platform grew, I began purchasing and building a number of ARs in various lengths and configurations for play and for work.

Now the time has come for my own son, Tanner, to become a deer hunter. Throughout his youth, I have shared my love of firearms with him. With a great deal of practice, he has become proficient with basic marksmanship skills and is exceptionally safe. Although Tanner enjoys sports and video games like most kids, he has also spent countless hours at shooting ranges. By age nine, Tanner was conducting El Presidente and Barnhart drills in respectable times with his first gun, a Walther  P22. Over the past two years, he’s learned to love his Ruger 10/22, as does every other kid. Tanner has also learned to enjoy shooting my ARs. Their compact/adjustable size and limited recoil make them ideal rifles for any youth or small-statured person to shoot.

About a year ago, during one of our range days, I was watching Tanner shoot my LAR-15 when an idea emerged in my head. After watching him manipulate the rifle with confidence, I realized what I should do about Tanner’s first deer rifle. After researching the cost of traditional hunting rifles, comparing their weights, lengths and ballistic performance, and then having Tanner hold a variety of these weapons in his hands, I knew that Tanner and I would take a different route for his first big-game rifle.

I reached out to Andy Willms, the store manager at Surplus Ammo & Arms in Lakewood, Washington (surplusammo.com). Having known Andy for many years, I knew that his knowledge of the AR industry would help guide me in the right deer-size-caliber direction. I approached Andy and told him of my plans to build Tanner a hunting rifle.

After talking with Andy and getting some sound advise, I was introduced to Aaron Banks, who had gone down a similar AR build path recently. Based upon their combined advise, I decided to build Tanner’s AR in 6.8 Remington SPC. Having been designed by the U.S. Army Marksmanship Unit, the 6.8 SPC is halfway between the 5.56mm NATO and the 7.62mm NATO, with the same bullet diameter as the .270 caliber. Being a very accurate round, I was confident that this would be a perfect caliber for hunting deer and more. Furthermore, I believe that the 6.8 SPC bullet weight of 110 or 115 grains would ensure success for Tanner’s first shots.

Having chosen the caliber of the AR, I made the decision to equip Tanner’s AR with a scope because we hunt mule deer in open country, where shots out to 500 yards are common. Having used a number of scopes over the years, I have grown fond of Leupold for the reliability, accuracy and cost of its scopes. I also wanted to keep the scope within Tanner’s capabilities, a factor that many hunters often overlook. In addition to the above factors, as well as replacement cost, I ordered a Leupold 1.5-4×20 Mark AR MOD 1 scope just prior to Tanner’s 11th birthday.

As Tanner’s birthday approached, I set up a time with the staff at Surplus, only this time I had Tanner in tow and turned him loose (with a budget, of course). Aaron Banks and the staff guided Tanner through his build options while keeping one significant goal in mind: keeping the gun lightweight. I have never seen a happier kid! First, Tanner chose one of Surplus Ammo & Arms’ AR lowers, but, of course, with the Grim Reaper molded into the lower. Next, Tanner chose Magpul for his furniture—the grip, stock, rear backup sight, handguard and vertical foregrip.

“Another benefit of the AR design is the controllable recoil that comes straight back. This was obvious watching Tanner shoot the rifle. All in all, Tanner’s AR in 6.8 SPC could not have turned out better.”

Next, Aaron suggested a Yankee Hill Machine front gas block with a flip-up sight. However, we needed to decide whether to build a carbine- or mid-length gun. This was one of those times when mail-ordered parts just wouldn’t cut it. The staff broke out the inventory, including their own creations. Tanner got the opportunity to hold several AR configurations and settled on a mid-length upper for his rifle. We then selected a GG&G scope mount for the flattop upper. With my insistence, Tanner selected a Magpul MBUS flip-up rear sight, a Bravo Company Manufacturing Gunfighter charging handle and a Magpul B.A.D. Lever (Battery Assist Device). Someday before Tanner’s first deer hunt, I will need to teach him about Mr. Murphy and his frustrating laws as they apply to hunting game animals, but for now, he just knows that I use the same parts on my rifles.

Having assembled the lower and accessories, it was time to choose the upper. I had already done some research on some manufacturers of 6.8 SPC AR platforms, but Aaron suggested a different route. He put me in contact with Ben Triplett at Bison Armory in Bellingham, Washington. Bison Armory is an up-and-coming builder of ARs specializing in 6.8 SPC and 7.62mm NATO. Bison Armory advertises its uppers as “rugged, reliable, accurate,” which is exactly what I was looking for in the upper. After a couple of phone calls to Ben at Bison Armory, I had my order completed at a fair price. Ben answered all of my questions and then some. After placing my order and waiting a couple of weeks for the barrel to be finished in OD green to match Tanner’s Magpul furniture, the package arrived from Bison Armory, including a 16-inch barrel with a 1-in-11-inch twist and a Young Manufacturing bolt carrier group with a Stag bolt. It was a second birthday for Tanner, and honestly, for me too—the upper is a work of art.

We then assembled the whole package. To feed Tanner’s rifle, I purchased a couple of Barrett 6.8 SPC magazines. Once fully assembled, the rifle weighed in at 7.56 pounds unloaded, exactly where we wanted it. With a collapsed length of 32.5 inches, it was a perfect fit for Tanner. Now it was time for him to break it in.

Thankfully, Bison Armory provides a very detailed set of instructions for breaking in its barrels. We followed these directions and broke in the barrel over three range sessions. It took less than 20 rounds, and we had keyhole impacts at 100 yards. As for Tanner’s first impressions, in his own words, “It does have a little kick, but nothing I can’t handle.” Since those initial shots, Tanner has put approximately 200 rounds flawlessly through the gun.

Another benefit of the AR design is the controllable recoil that comes straight back. This was obvious watching Tanner shoot the rifle. All in all, Tanner’s AR in 6.8 SPC could not have turned out better. This rifle will grow with him and should be adequate for many species of big game. Although the cost of 6.8 SPC ammo isn’t great, I plan on putting together a 5.56mm upper for practicing. I guess we should wait until Christmas for that purchase. Otherwise, people are going to think that I spoil the kid! It’s now his turn to put the rifle to good use. 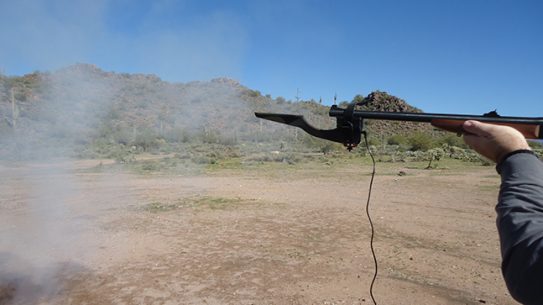 MagnetoSpeed: A Chronograph That Fills A Need!

A field test of a bayonet-style chrony -- the MagnetoSpeed -- without the boloney...