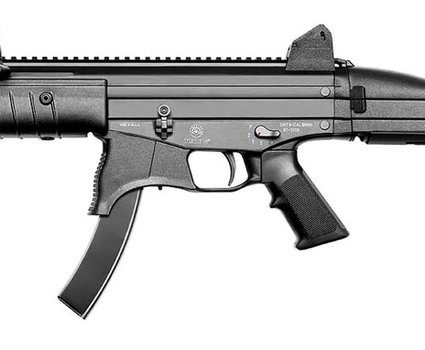 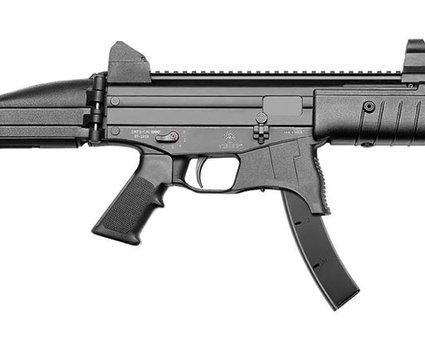 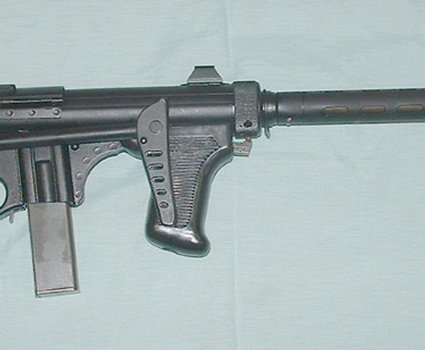 3 of 9
SMT02_phatch
First-ever published photo of a circa-1980s prototype Taurus semi-auto 9mm carbine based on the company’s MT-12A submachine gun (note the locally developed, enlarged grip safety lever). Since this caliber is a ‘no-no’ for Brazilian civilians, it is assumed that this long-barrel gun was intended for the U.S. market before such “aggressive” items as the folding stock and pistol grip was banned from long guns. 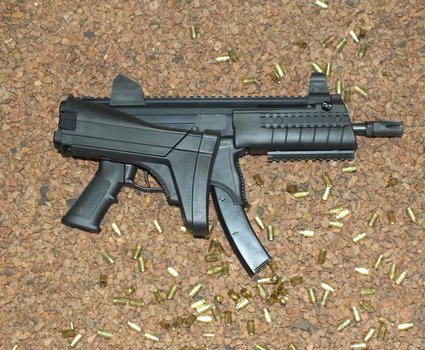 4 of 9
SMT04_phatch
The SMT40 shown with the adjustable polymer stock folded to the right. The gun can be operated and fired in this configuration if necessary. 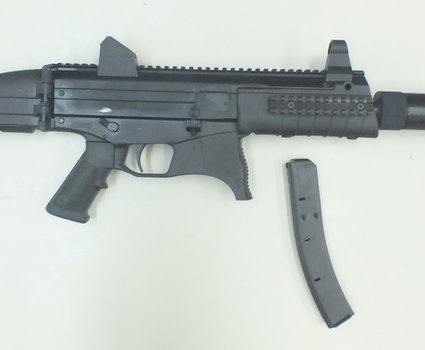 5 of 9
SMT07_phatch
This SMT9 is fitted with a “Producer T-Z” sound suppressor, whose origin was not established. Note the characteristic shape of the proprietary 30-round magazine. 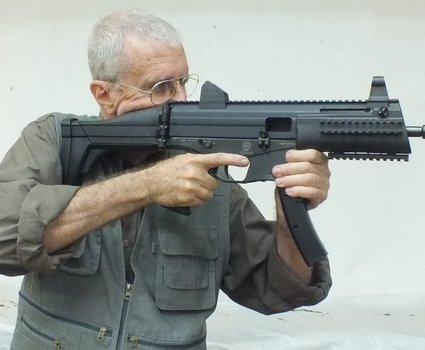 6 of 9
SMT08_phatch
The distinctive SMT magazine housing serves well as a forward grip and automatically avoids an eventual inexperienced shooter to hold the gun by the magazine itself, which is bound to cause a malfunction. 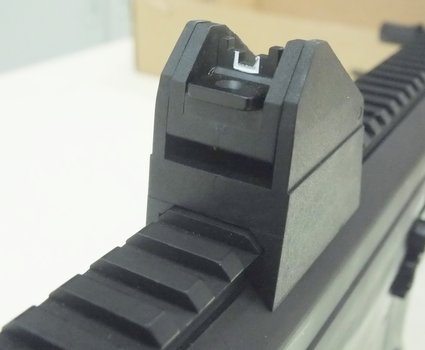 7 of 9
SMT09_phatch
The massive sight structures of the SMT family (the rear sight is in the 25-meter U-notch position) are mounted on a MIL-STD-1913 rail that runs along the top of the gun. They are to be replaced by smaller flip-up units so as not to interfere with the use of red-dot/holographic sights. 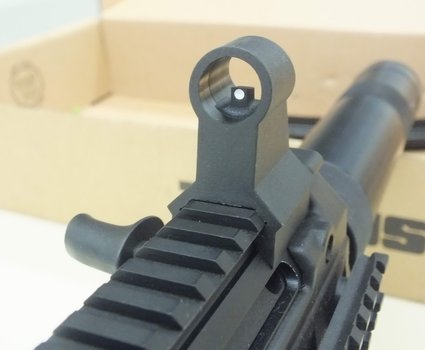 8 of 9
SMT09A_phatch
The massive sight structures of the SMT family (the rear sight is in the 25-meter U-notch position) are mounted on a MIL-STD-1913 rail that runs along the top of the gun. They are to be replaced by smaller flip-up units so as not to interfere with the use of red-dot/holographic sights. 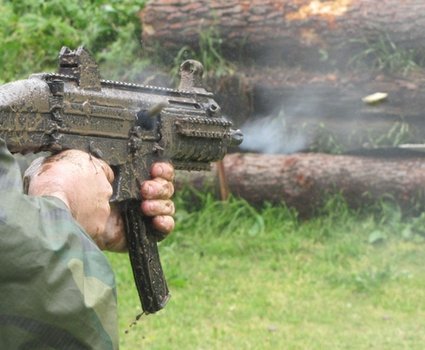 9 of 9
SMT11_phatch
During a recent demonstration abroad, the potential client came up with an unexpected field test for the SMT9 under, er…, ‘unfavorable’ conditions. The gun worked flawlessly all the time, such as after being deeply submerge in mud, as shown here. 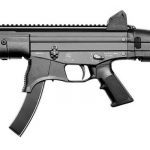 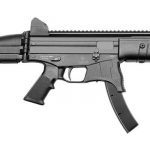 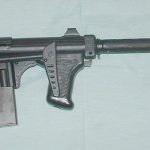 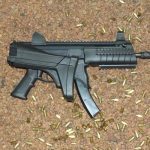 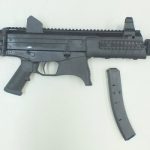 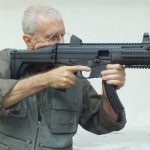 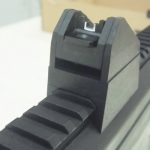 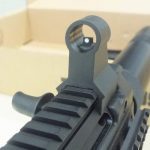 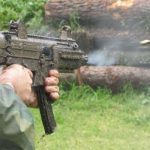 In a time when the gun market is caught up in an AR craze, with one new 5.56mm NATO rifle or carbine hitting the physical or virtual shelves almost every week, it’s somewhat of a surprise when a major manufacturer comes up with a brand-new submachine gun. But that’s what Taurus of Brazil is doing right now. The company is fully aware that submachine guns still have their niche in the law enforcement and military arenas, so the guys from Porto Alegre, in Brazil’s Rio Grande do Sul state, are now producing the SMT (for “SubMetralhadora Taurus,” or literally Taurus SubMachine gun) weapons family, and first deliveries to some local state police forces have already taken place.

Brazilian SMG History
The renowned revolver and pistol manufacturer is not exactly a newcomer to the submachine gun business. Its earliest ventures in this field can be traced back to the late-1960s/early-1970s, when the Brazilian Army was looking for an SMG to replace its inventory of INA MB50 and M953 weapons, locally made .45 ACP variants of the Danish 9mm Madsen M46. The country’s military had been using the .45 ACP round for pistols and submachine guns since late World War II, when Brazilian troops fought alongside the U.S. Army in Italy and were widely equipped with Thompsons, Grease Guns and M1911A1s. The 9mm round was chosen as the standard for pistols and submachine guns from the 1970s on, and the search for new weapons began.

At that time, Taurus teamed with Smith & Wesson and came up with a variant of the S&W Model 76 in 9mm. The sole “02” prototype known to exist (which, incidentally, is not in Taurus’ hands) is a somewhat crude gun of conventional, open-bolt blowback operation featuring a tubular bolt/receiver configuration, folding metal stock, 8-inch barrel in a perforated jacket, and an empty weight of 8.4 pounds. When compared to the original S&W Model 76, the main differences include an extended magazine housing, an ejection port cover (when closed, it blocks the bolt), redesigned sights and a non-reciprocating charging handle. But the Beretta M12 was eventually selected for adoption, with license production of the so-called “MtrM M1972” being carried out by Indústria e Comércio Beretta S.A., in São Paulo.

In 1980, Taurus acquired the Brazilian license, which became Forjas Taurus S.A.-São Paulo Branch. The gun was redesignated the MT-12, and in June of 1993, all production was transferred to the company’s main facilities in Porto Alegre. The later MT-12A and MT-12AD variants incorporated minor modifications to the original Italian design, including lengthening the pistol grip safety lever.

In 2000, Taurus started a design and production cooperation program with Chile’s FAMAE (Fábricas y Maestranzas del Ejército), which resulted in the local manufacture of the SAF .40 S&W submachine gun—marketed in Brazil as the MT-40—which was adopted by a number of local police forces. This blowback-operated gun fires from the closed-bolt position at a high rate of around 1,200 rounds per minute and weighs 8.2 pounds with a 30-round magazine in place. The barrel is 7.9 inches long with an overall length of 26.7 inches (16.6 inches with the stock folded to the right side). An MT-9 in 9mm was also produced, but the .40 S&W was more popular. Other derivatives include the CT-40 semi-auto carbine with a 16.1-inch barrel and the CT-30 in .30 Carbine, which has an 8.1-inch barrel. 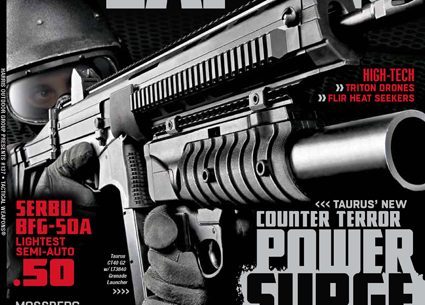 In a time when the gun market is caught up in an AR craze,…