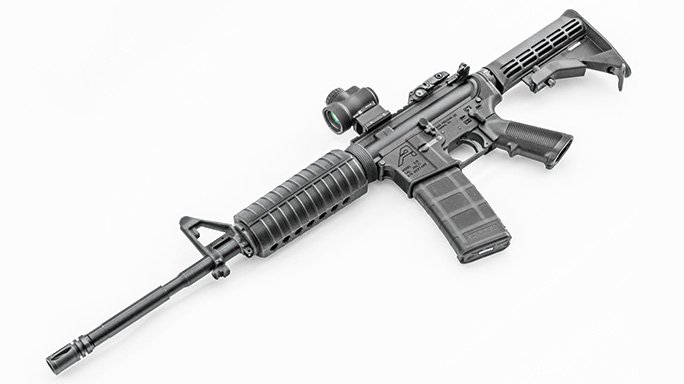 1 of 5
Straight As an Aero: Aero Precision’s AC-15 rifle
The 5.56mm NATO AC-15 from Aero Precision might be an entry-level AR, but it comes with several enhancements to make sure it won’t miss a beat on patrol. Shown with a Trijicon MRO. 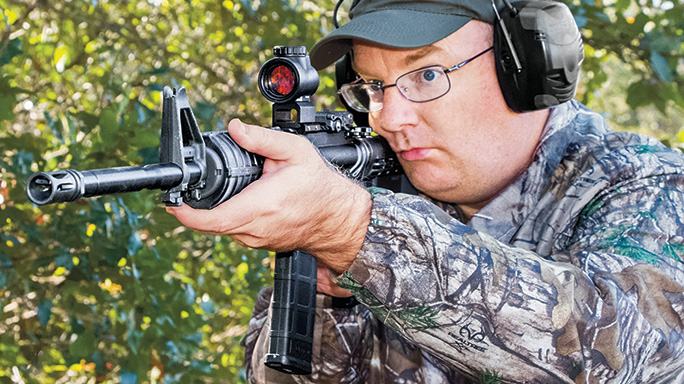 2 of 5
Straight As an Aero: Aero Precision’s AC-15 rifle
Thanks to the Trijicon MRO and the AC-15’s balance and light weight, it was easy to get on target quickly. 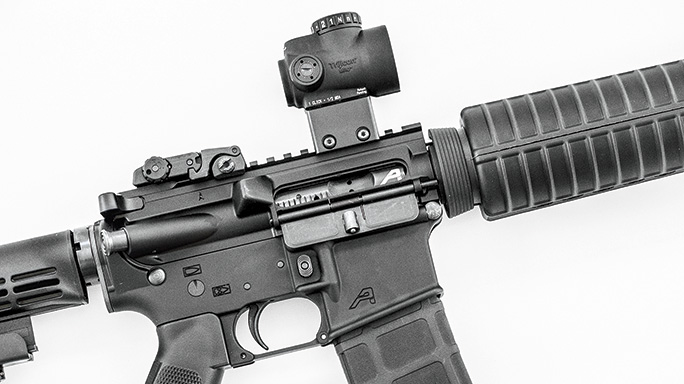 3 of 5
Straight As an Aero: Aero Precision’s AC-15 rifle
The included A2 front post and Magbul MBUS rear sights do an excellent job, and the flattop upper makes it easy to add a fast-targeting optic. 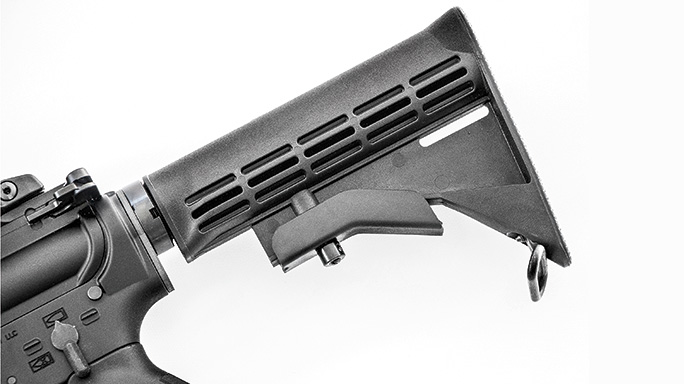 4 of 5
Straight As an Aero: Aero Precision’s AC-15 rifle
The collapsible buttstock can be adjusted to six different length-of-pull positions to fit shooters of various sizes. 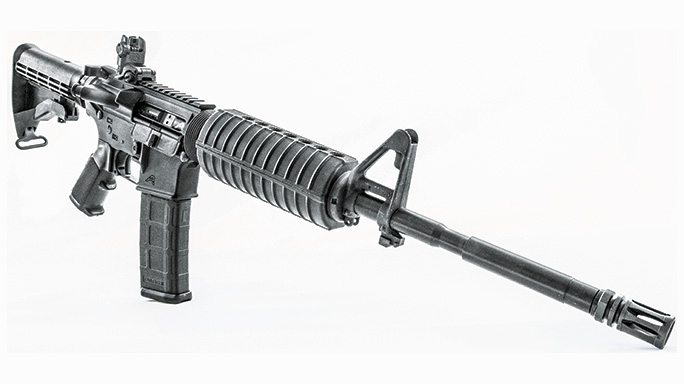 5 of 5
Straight As an Aero: Aero Precision’s AC-15 rifle
Unlike some entry- level ARs, the AC-15 comes with a dust cover and a forward assist. 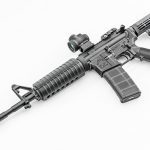 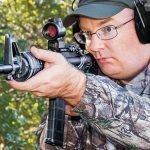 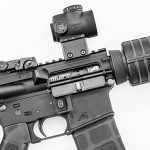 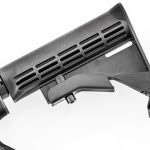 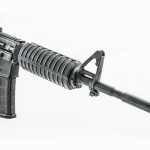 Officers armed with rifles save lives. When a person intent on mass murder begins a spree killing, an officer with a rifle is able to engage the subject with greater precision, from longer distances and defeat body armor. This is a fact that has been proven time and time again, yet many of the nation’s law enforcement officers do not have a patrol rifle as part of their normal duty gear.

Consider the 2005 case in Tyler, Texas, where a deranged man opened fire on his ex-wife and son in front of the courthouse. After killing her, wounding his son and killing a concealed-carry permit holder who attempted to intervene, the man engaged in a running gun battle and high-speed chase with law enforcement. The murderer, who was wearing a bullet-resistant vest, was stopped by a responding sergeant armed with an AR-15.

Perhaps the most famous shootout in modern law enforcement history occurred in North Hollywood. In 1997, two robbers were confronted by LAPD officers outside of a Bank of America branch. Both subjects were wearing body armor and seemed invincible against dozens of responding officers who were armed with only handguns and shotguns. Because the LAPD officers were not armed with rifles, they were unable to penetrate the subjects’ body armor or effectively engage at relatively long distances. As a result, the subjects wounded 11 officers and seven citizens
before the SWAT team could arrive and stop them.

Now, with incidents of terrorism happening more and more frequently in the United States, the need for responding officers to be armed with rifles is ever greater. In the 2015 attack on a U.S. Navy facility in Chattanooga, Tennessee, the terrorist was armed with an AK-style rifle. Because responding officers were armed with rifles, they were more quickly able to engage and neutralize the subject, preventing further deaths.

While the idea of equipping officers with rifles is dismaying to some people, the reality is that the rifle is a tool that can save lives. The rifle is also a tool that tends to be expensive and requires a significant investment of time and money to ensure officers are properly trained with it. Finding a tool that is easy to use, affordable and reliable is one of the key points for many departments having to justify the costs.

The AR-15 rifle is an easy-to-use system that has proven to be effective in all kinds of conditions and scenarios. With its modularity, it can easily be adapted to officers of all body sizes, while its low recoil does not scare off non-shooters in the agency. Finding the right AR-15 can be a challenge due to the sheer number of companies making the guns and the wide range of price points.

With a background in the aerospace industry, Aero Precision manufacturers a well-made, value-priced rifle called the AC-15. Following the standard AR pattern, the AC-15 offers a complete gun suitable for patrol work that does not cut corners in the manufacturing process. Police budgets are always scrutinized by short-term-thinking politicians who rarely understand the value of quality training and equipment. Too many times a department is only able to supply officers with rifles after a
tragic event. A low-cost but quality rifle can help a motivated agency head get budget approval for these lifesaving tools.

The AC-15 starts with a receiver set made of 7075-T6 aluminum and mil-spec-compatible parts. The rifle has a 16-inch, chrome-moly barrel with a 1-in-7-inch twist rate. The barrel has an M4 profile and a QPQ corrosion-resistant finish. At the end of the barrel, the company attaches an A2-style flash suppressor. The rifle uses a carbine-length gas system to keep running.

Aero Precision builds the bolt carrier group to mil-spec standards. The gas key is properly staked. Aero Precision uses a bolt that is made of Carpenter 158 steel and has been both high-pressure (HP) and magnetic-particle (MP) inspected.

The A2-style tower houses the front sight post and gas block. Unlike many of the budget AR-15 rifles on the market, Aero Precision includes a Magpul MBUS rear sight. This allows a department to immediately place these rifles into service without the added expense of purchasing and installing a rear sight. The top of the receiver has a Picatinny rail, so adding an optic takes just a few moments.

Instead of a more expensive railed handguard, a standard two-piece, M4-style handguard is used on this rifle.

It includes a double heat shield. For a department that wants to add a white light to the rifle, I recommend checking out the Elzetta ZFH1500 flashlight mount. This allows for the attachment of a typical tactical flashlight by securely affixing it to the front sight tower. The officer can then activate the tail switch of the flashlight without the need for a remote switch.

A collapsible, M4-style stock is attached to the forged lower receiver. Aero Precision also installs an A2-type pistol grip. Although I prefer a different stock and pistol grip, these are perfectly serviceable and certainly good enough for department issue.

Both a dust cover and forward assist are included on this rifle. Normally, I would not mention that the rifle has a dust cover and forward assist. These are considered normal parts of an AR-15 build. However, there are some companies that delete these items in an effort to reduce the per unit cost of the rifle. Instead, Aero Precision includes these parts with the AC-15 rifle.

As I stated earlier in the article, the rifle’s barrel has a 1-in-7-inch twist rate, which is generally accepted as being able to stabilize a wide range of bullet weights. So, I tested the AC-15 with factory loads with 55-, 60- and 69-grain bullets. All of the loads performed well. Although I expected the heavier bullets to have the edge in accuracy, I found that the 55-grain load from PMC actually provided the best five-shot group of the day at just 1.25 inches with the standard sights. Shooting with the included sights was straightforward. As it arrived, the gun was on paper with all of the ammo I had with me.

After shooting for a while with the stock sights, I added a Trijicon MRO (Miniature Rifle Optic) to the gun. The sight only took a minute or so to install. If you are not familiar with the MRO, it is a red-dot-style optic that was designed to be a compact sight for rifles. The MRO offers has eight brightness settings, including two that are designed for use with night-vision equipment. It also has a 25mm objective lens that allows for a greater field of view than many other red-dot-style optics currently on the market.

I’ve had a great deal of success with the optic on the range with other rifles as well. It has unlimited eye relief, and I can mount it anywhere on a rifle and still be able to use the aiming point very easily. Although many people will buy an MRO for a 5.56mm weapon, I’ve also run the optic on rifles chambered for the 7.62×39 and 9mm cartridges. The MRO has performed admirably on all of the guns. It uses the same rugged construction that the company uses in its ACOG line and will run constantly for five years on a single battery. I believe it is an excellent optic choice for any law enforcement patrol rifle.

I had no malfunctions with this rifle while shooting off the bench or off-hand. All of the ammo fed reliably, and the gun was flawless with the included Magpul PMAG. I also ran a number of other magazines, including those from Troy, Brownells and Hexmag. All of the magazines inserted, fed and dropped free consistently.

The AC-15 is a solid, reliable rifle with a very attractive price tag. Unlike some other companies trying to compete at the budget end of the market, Aero Precision did not delete features to save a few pennies on each unit. The company ships the rifle equipped with all of the parts buyers would consider standard, including a Magpul magazine and rear sight. This allows the AC-15 to be placed into immediate service.

Is the AC-15 right for your agency? It is worth investigating. My sample size of only one is too small to make any definite statements regarding long-term, heavy use of the guns. However, based on the performance of the test gun I had, I would happily add Aero Precision to the consideration process of any agency needing to equip its officers with patrol rifles. 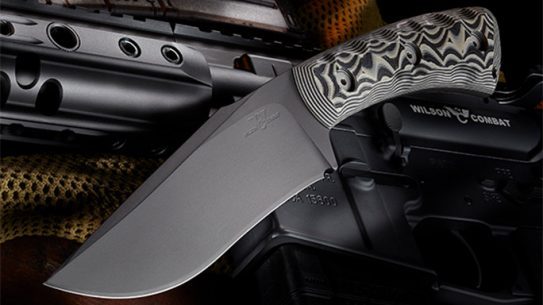