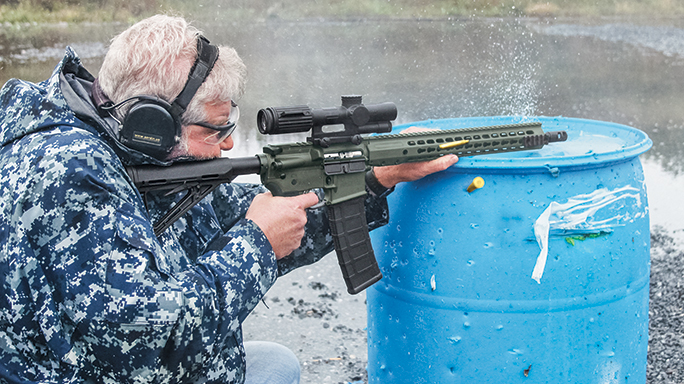 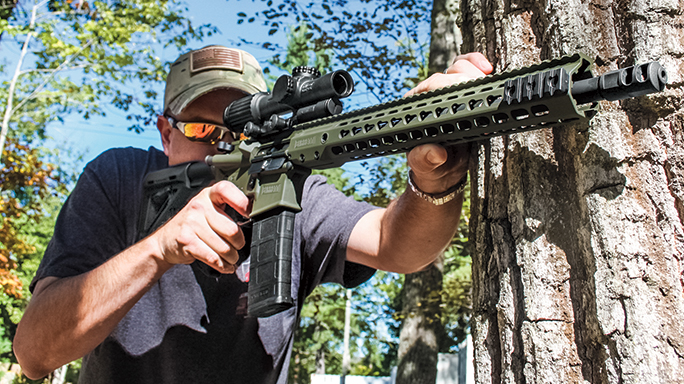 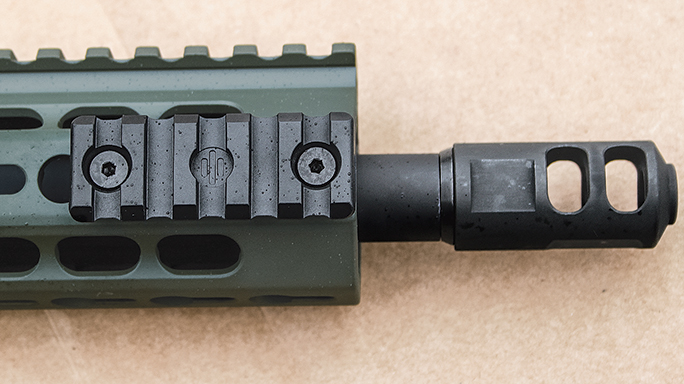 3 of 7
Gun Test: Barrett’s REC7 DI Rifle in 5.56mm
The sides and bottom of the handguard are designed to accept KeyMod accessories or short rails. 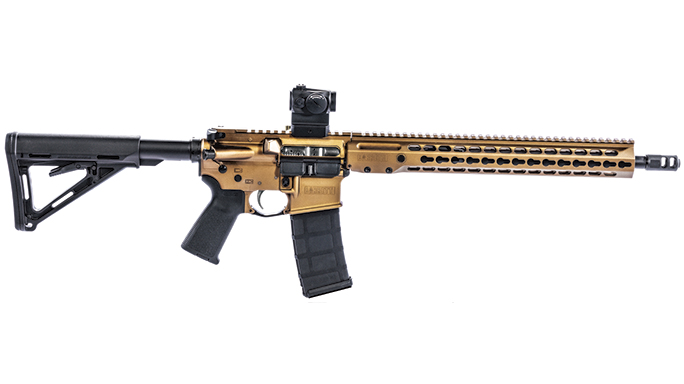 4 of 7
Gun Test: Barrett’s REC7 DI Rifle in 5.56mm
The new REC7 DI carries on Barrett’s reputation for quality and attention to detail in a direct-impingement package ready to tackle any mission. Shown with an Aimpoint Micro T-1. 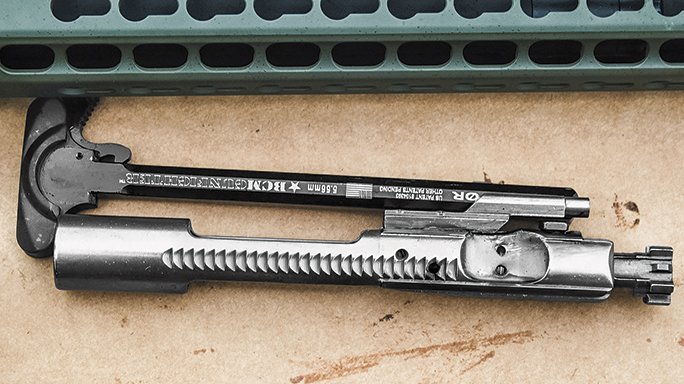 5 of 7
Gun Test: Barrett’s REC7 DI Rifle in 5.56mm
The bolt (bottom) is made from high-strength 9310 steel before being coated for maximum durability, and the BCM Gunfighter charging handle (top) is another tank-tough feature. 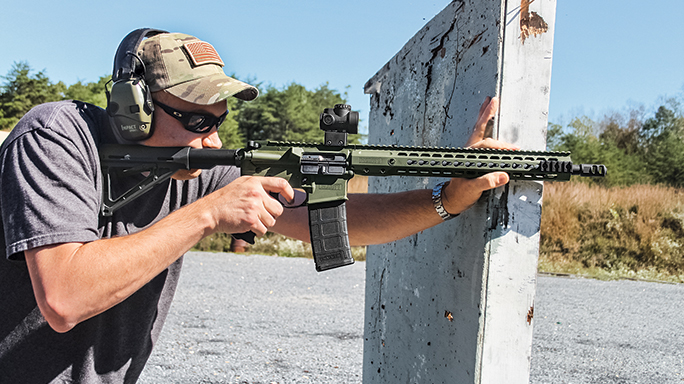 6 of 7
Gun Test: Barrett’s REC7 DI Rifle in 5.56mm
The REC7 DI comes with a Magpul MOE pistol grip and stock for top-notch ergonomics and handling. The stock helps the rifle fit a variety of shooters. 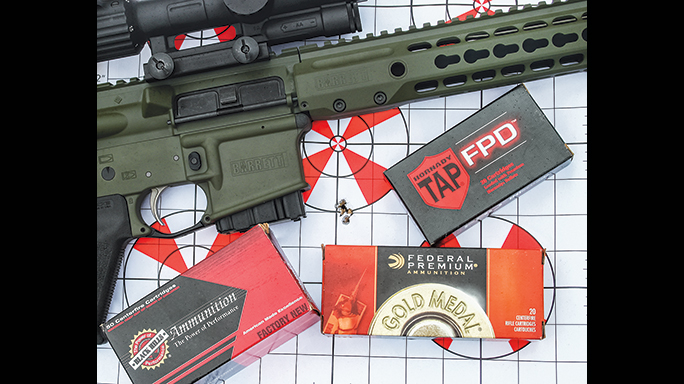 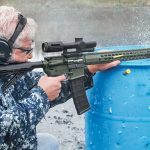 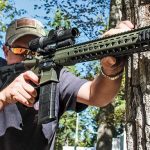 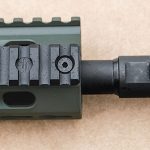 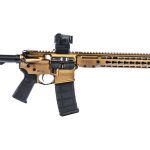 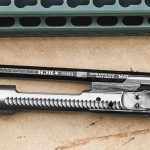 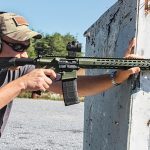 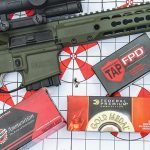 It is nice to witness a product’s evolution, especially when you have experience with the early models to better appreciate the modifications made.

The new Barrett REC7 DI (Direct Impingement) rifle is a great case in point. Barrett has taken its vision of the AR platform another step forward with its new direct-impingement rifle.

Interestingly, the REC7 DI is Barrett’s fourth AR-pattern rifle. The first was the M468, which also employed a direct-impingement operating system and was discontinued from production. Then the original piston-driven REC7 was introduced in 2007 and the REC7 Gen II, still a pistol-driven gun, was unveiled in 2013. Now, with the REC7 DI, AR owners will appreciate that Barrett decided to offer premium candidates in both the piston and DI
genres.

Barrett is known for producing high-quality weapons that are accurate, rugged and reliable—like the Chris Barrett-designed MRAD and 98B—and the company turned its extreme attention to detail toward the REC7 DI. The rifle is available in 5.56mm NATO, 300 Blackout and 6.8 SPC. The 5.56mm and 6.8 SPC rifles are available with either 16- or 18-inch barrels, and a DMR model is in the works. The 300 BLK models are available with 10- or 16-inch barrels. I recently tested a 5.56mm model with a 16-inch barrel.

The Barrett REC7 DI features upper and lower receivers that are machined from 7075-T6 aluminum and then hardcoat anodized. The 16-inch, free-floating, match-grade, stainless steel barrel comes equipped with a Chris Barrett-designed muzzle brake, while the barrel extension has M4 feed ramps. Barrett profiles and chambers its barrels in-house for tighter quality control and a smoother supply chain. The carbine has a specialized 5.56mm match chamber that is similar to .223 Wylde specifications, essentially splitting the difference between .223 Remington and 5.56mm NATO dimensions to maximize the carbine’s accuracy potential.

Within the upper is an enhanced bolt made from high-strength 9310 steel. The bolt is proofed and magnetic-particle inspected to guarantee reliable performance. Along those same lines, Barrett gave the bolt carrier a nickel-boron coating to further enhance the reliability of the REC7 DI. Another enhancement is the BCM Gunfighter charging handle. While cheaper charging handles tend to twist, bend or lose a latch under hard use, the tank-tough BCM design can handle high-stress shooting.

My test REC7 DI arrived with a new Barrett Rail System (BRS) forend. This free-floating, low-profile handguard (also available as a standalone accessory) helps the 16-inch-barreled carbine maintain an unloaded weight less than 7 pounds, making it one of the lighter ARs on the market. The versatile handguard features a full-length Picatinny top rail, KeyMod slots along the slides and bottom for mounting accessories like lights, lasers, foregrips and bipods, and numerous lightening cuts that also serve to help dissipate barrel heat. Under the handguard is a low-profile gas block that is machined from heat-treated tool steel and is lighter than standard gas blocks.

The lower receiver features standard AR controls, a single-stage ALG Defense Advanced Combat Trigger (ACT) and a collapsible Magpul MOE buttstock. The stock can be adjusted to six different length-of-pull positions, giving the REC7 DI an overall length of 32.5 inches with the stock collapsed and 35.75 inches with the stock fully extended. Finally, the upper and lower receivers are given a Cerakote finish that resists corrosion for long-term durability. My test rifle came in OD green, but black, tungsten gray and tan colors are also available.

I tested the Barrett REC7 DI with approximately 600 rounds of Black Hills, Federal, Hornady and Winchester ammunition. To measure the carbine’s accuracy, I used a Trijicon 1-6x24mm VCOG to fire three 5-shot groups with each ammunition type at 100 yards, then switched to a Trijicon MRO reflex sight for the remainder of the evaluation. The REC7 DI kept every five-shot group within 1.5 inches at 100 yards, with several loads producing sub-MOA groups out to the 300-yard berm at the Echo Valley Training Center (EVTC). This accuracy level justifies considering leaving a magnified optic such as the versatile Trijicon VCOG mounted on the REC7 DI. The velocity figures ranged from 2,700 to 3,000 fps over my RCBS chronograph.

Next, I installed the Trijicon MRO and sighted it in at 50 yards before taking the REC7 DI onto the EVTC’s 360 and “Jungle Walk” ranges. Training scenarios involving team tactics along with patrolling to contact allowed the REC7 DI to shine in terms of potent firepower and accuracy. Firing from unorthodox positions while working around range vehicles showed why the lightweight Barrett REC7 DI and Trijicon MRO are such a good combination. The REC7 DI is easy to manipulate, and the MRO sight is not dependent on a specific eye relief distance to be effective in accurately placing rounds on target. The Trijicon MRO assisted in engaging targets at close distances with its easy-to-acquire red dot. The MRO’s 2-MOA red dot makes it easier to engage multiple targets in rapid fire than with open sights, while at same time providing adequate accuracy out to a couple hundred yards on man-sized targets due to the red dot not obscuring the target.

A huge benefit ofchoosing an AR for use is the multitude of magazines available from various manufacturers. I have come to trust Brownells for my metal AR magazines and Magpul for polymer variants. Magpul’s 40-round PMAG is steadily growing as a favorite among the higher-capacity AR magazine variants due to its track record of performance involving multiple weapon reviews. Along these same lines, nearly every tactical webbing gear manufacturer in the U.S. offers products to carry AR magazines, from chest rigs and vests to thigh rigs and belt pouches. Go-to brands are U.S. Palm, High Speed Gear, Velocity Systems and BlackHawk. I tested the REC7 DI while wearing a bandoleer-style pouch from BlackHawk. It will appeal to many because of its ability to accommodate two pistol magazines in conjunction with four AR magazines. The BlackHawk bandolier can be grabbed in a hurry and slung over your shoulder while also grabbing the Barrett REC7 DI. For law enforcement, four spare magazines (plus one in the REC7 DI) should be enough to solve most issues that would call for an AR in the first place.

With the REC7 DI, Barrett wanted to create a lightweight, easy-to-use AR that was similar to Eugene Stoner’s original concept—and it succeeded with flying colors. All of the Barrett REC7 DI’s features are intended for maximizing your effectiveness during a gunfight or realistic training on the range.

The key component in a fighting rifle is reliability. No matter how accurate or powerful a rifle is, if it does not work 100 percent of the time, it is a liability. To this end, the REC7 DI ran flawlessly during testing. This carbine is intended for serious practitioners who plan on using it for patrolling, training or self-defense. Years of experience and dozens of training courses have given me strong opinions in terms of what constitutes an effective fighting rifle. A lightweight, fast-handling AR that offers plenty of firepower would be just the ticket, and the Barrett REC7 DI is a great choice to fill such a role. 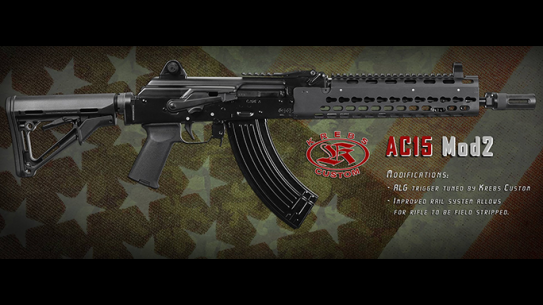