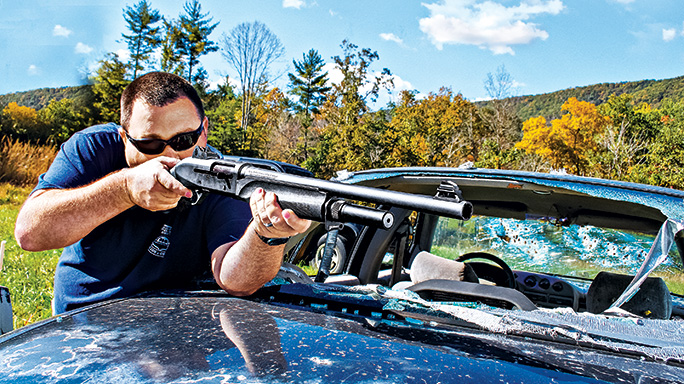 1 of 7
Benelli M2: A Gun Test with the 12-Gauge Speed Demon
At the range, the Benelli M2 Tactical proved 100-percent reliable and was fast on target during realistic drills thanks to its high-visbility sights, light weight and semi-auto action. 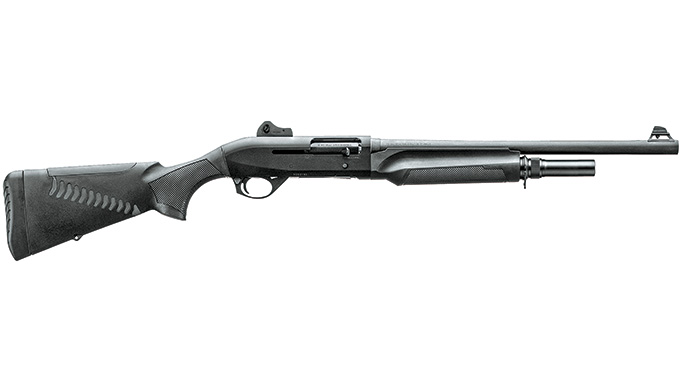 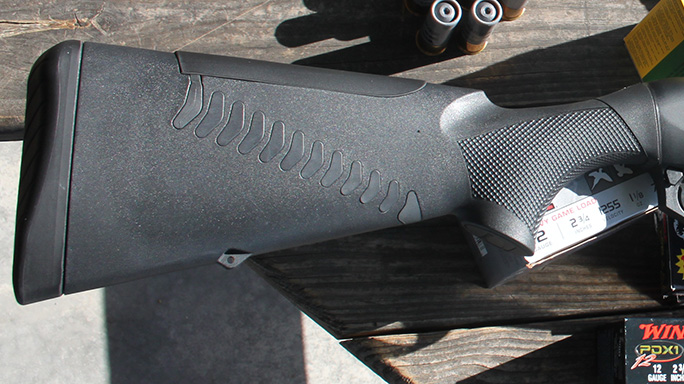 3 of 7
Benelli M2: A Gun Test with the 12-Gauge Speed Demon
Chevrons in the ComforTech stock help reduce felt recoil by 48 percent. 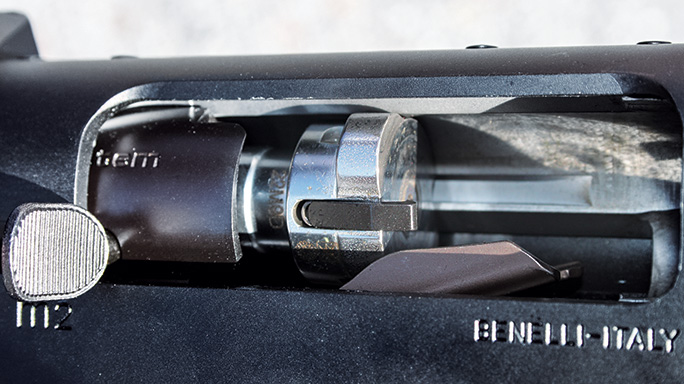 4 of 7
Benelli M2: A Gun Test with the 12-Gauge Speed Demon
Benelli’s innovative Inertia Driven system is the key to the M2 Tactical’s reliability with both slugs and buckshot. 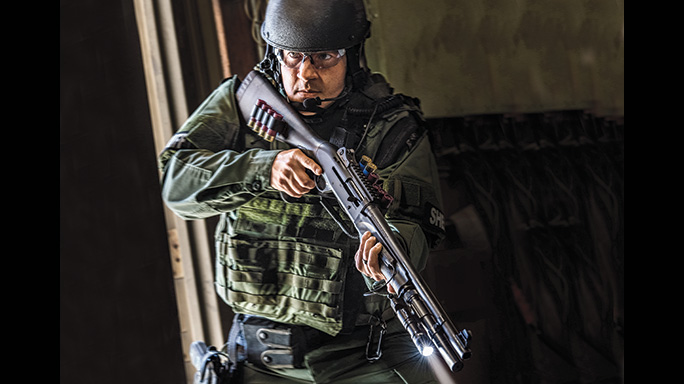 5 of 7
Benelli M2: A Gun Test with the 12-Gauge Speed Demon
While pump-action shotguns have ruled the law enforcement roost for decades, the Benelli M2 Tactical is sure to turn heads with an Inertia Driven system that takes semi-auto speed and reliability to a whole new level of CQB performance. 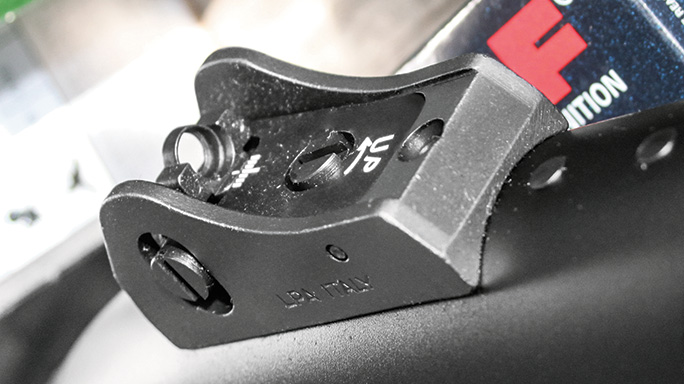 6 of 7
Benelli M2: A Gun Test with the 12-Gauge Speed Demon
The Benelli can use interchangeable chokes, and it comes with a ghost-ring rear (pictured). 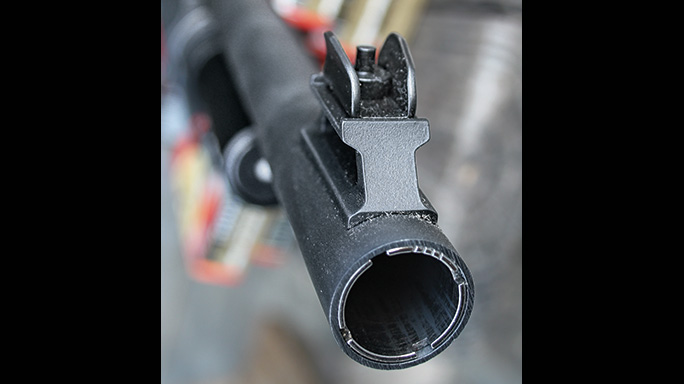 7 of 7
Benelli M2: A Gun Test with the 12-Gauge Speed Demon
The Benelli can use interchangeable chokes, and it comes with a tall front sight (pictured). 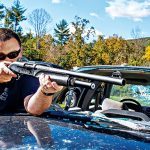 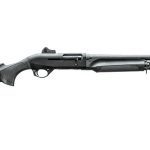 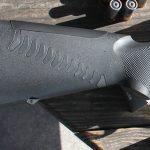 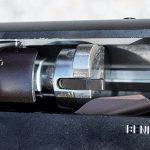 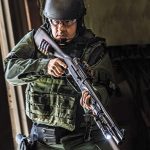 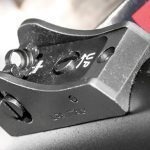 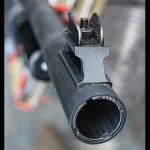 While semi-automatic shotguns have many capabilities, few have demonstrated the “hell and back” reliability necessary to gain the confidence of users in life or death tactical situations related to law enforcement or personal defense. But Benelli has adapted its ultra-reliable inertia-driven operating system to the tactical shotgun format with the new M2 Tactical, thus challenging assumptions as to what a tactical shotgun should be.

With the M2 Tactical, form follows function, and its svelte lines contradict the often brutish appearance that generally distinguishes other tactical shotguns.

As mentioned, the M2 Tactical uses Benelli’s patented inertia-driven operating system. Most auto-loading 12-gauge shotguns use some sort of gas-operated feeding system. Benelli’s semi-automatic M2, however, uses the kinetic energy generated by the gun’s recoil to eject the spent shotshell and load a fresh one. The system has three basic moving parts: the bolt body, the inertia spring and the rotating bolt head. The M2 operates by means of a spring that is freely interposed between the locking head and bolt. As the gun recoils during firing, the inert breech bolt moves about 4mm forward, compressing the spring. When the spring is fully compressed, it overcomes breech bolt inertia and thrusts the bolt to the rear under residual pressure. The gun extracts the shotshell case and reloads another shell from the magazine tube. The spring pressure is designed to delay the opening of the action until after the shot has left the barrel. This compensates for the different pressures produced by shotshells of varying power.

The Benelli M2 Tactical’s Inertia Driven system is simple; there are fewer parts to add weight to the shotgun or to fail mechanically. This system also eliminates the drawbacks of barrel-recoil systems, such as barrel vibration and increased recoil impulse, as well as gas-operated systems, which tend to be less reliable after significant use due to fouling in the receiver area.

The Benelli M2 Tactical features a matte black receiver, an 18.5-inch barrel and a dull black forend and buttstock. The shotgun has a 5+1 capacity, and its 3-inch chamber allows it to accommodate both 2¾- and 3-inch shells.

While an M2 Tactical variant with a pistol-grip stock is available, I decided to evaluate a model with a standard buttstock profile, and my test sample came with Benelli’s innovative ComforTech recoil-reducing stock. Benelli reports that the ComforTech system reduces felt recoil by as much as 48 percent compared to a standard stock. This is accomplished via the ComforTech cheek and buttstock recoil pads as well as 12 synthetic chevrons placed in the stock per computer analysis to better absorb and extend the recoil impulse. While “soft shooting” and “12 gauge” generally don’t go hand in hand, relatively speaking, the 6.7-pound M2 Tactical is one of the softest-shooting 12-gauge shotguns on the market.

More notable features include the Benelli M2 Tactical’s LPA ghost-ring sights. The front sight features an M16-style post protected by steel wings. The rear sight is a ghost-ring-type unit that is fully adjustable in terms of windage and elevation. It too is protected from abuse with protective wings on either side. The front sight sits about a half an inch above the barrel to work with the rear ghost ring. In short, these sights allow a user to take full advantage of the wide range of 12-gauge ammunition available. Shooters can easily get slugs can on target out to 100 yards, while buckshot or other shot sizes are well accommodated for quick, accurate placement at close range.

When it comes to combat or personal defense, shotguns are generally used to fire two primary types of shells—slugs and buckshot. This ability to handle different styles of projectiles is what makes shotguns so versatile and popular. To that end, I tested the Benelli M2 Tactical with Hornady Critical Defense and TAP buckshot as well as Federal Premium FliteControl 00 buckshot. The Federal Premium and Hornady buckshot loads utilize special wads for tighter buckshot patterns, thus offering a longer effective range. Generally, buckshot loads have a velocity between 1,100 and 1,600 fps, giving over 2,000 foot-pounds of muzzle energy for each of its multiple projectiles.

I also tested the M2 Tactical with a Winchester 12-gauge PDX1 loading that combines a 1-ounce slug and three 00 pellets. This load harkens back to the “buck-and-ball” loads used by our forefathers against the British in the Revolutionary War, and each other during the Civil War. Another interesting slug load from Winchester was also tested: the PDX 1 segmented slug. Winchester designed the segmented slug to break into approximately three 150-grain pieces upon impact with a penetration limited to 13 inches. In other words, the Winchester PDX 1 segmented slug load would be perfect for law enforcement officers or civilians concerned about overpenetration with traditional slug loads. Lastly, I also tested standard Federal, Winchester and Wolf 1-ounce slugs with the M2 Tactical. These slug loads were designed primarily for hunting but work fine in any role, including defense. Slugs leave the muzzle between 1,200 and 1,600 fps depending on how they’re manufactured, producing over 2,500 foot-pounds of energy and offering a trajectory of +3 inches at 50 yards to give a 100-yard zero.

The Benelli M2 Tactical arrived with an Improved Cylinder choke tube screwed into the end of the cryogenically treated barrel. Other choke tubes were included as well. However, Improved Cylinder seems to be preferred choice for tactical shotguns contemplating both slug and buckshot use. The M2 Tactical generated spreads of 3 to 8 inches at 10 yards with the test buckshot loads. The buckshot spreads increased to 8 to 22 inches at 25 yards, with the Federal and Hornady loadings being on the tighter side of the average. The Federal and Hornady 00 buckshot loads are the epitome of the new-age tactical buckshot, taking advantage of advances in wad technology to keep patterns tighter and thus extending the effective range of 00 buckshot.

Many would comment that one should resort to slugs for shooting beyond 30 yards. But testing with the Federal FliteControl and Hornady Critical Defense/TAP buckshot indicated otherwise. The M2 Tactical was able to place the majority of these pellets on IPSC-style silhouette targets out to 40 yards, and each of these pellets strikes with the force equivalent to a .32 ACP or .380 ACP. Slugs performed in the 3-inch range at 50 yards in the M2 Tactical, with the ghost-ring sights proving their worth. I regularly hit man-sized steel targets at 100 yards and was certainly satisfied to see the 1-ounce Federal, Winchester and Wolf slugs rocking the target back on its base after each hit.

Low-recoil buckshot or slug loads need to be tested with any semi-automatic shotgun, and here the Benelli’s inertia-driven operating system proved its reliability. I fired nearly 400 various rounds in this test and evaluation, including low-brass birdshot and low-recoil buckshot and slugs, and the Benelli shotgun ran flawlessly every single time.

After creating patterns to measure the M2 Tactical’s accuracy, I ran the shotgun through some exercises to get a better appreciation of how the Benelli M2 Tactical shotgun handles and performs. The relatively limited capacity of shotguns—compared to high-capacity rifles—is often listed as a major detriment of choosing a shotgun over another weapon type. One of the most crucial things to learn when choosing a shotgun for defense is how to keep it from running out of ammunition. So, my drills involved moving between barricades and engaging shoot/no-shoot targets. Another drill was based on engaging several shorter-range targets out to 30 yards before having to engage a designated target placed 90 yards away. This necessitated switching from buckshot to a slug before engaging the final target. Thankfully, the Benelli’s manual-feeding cutoff button made this a simple task to accomplish.

A great test for any shotgun—especially one destined to be used in a CQB setting—is shooting tossed clay targets. This also helps test the shotgun’s reliability using lots of low-recoiling ammunition. The M2 Tactical ran low-brass Winchester #7.5 shot without a hitch. The ghost-ring sights weren’t a problem at all, with the rear sight “disappearing” naturally as my eye focused on flying clay targets and the front sight leading them. The low-brass shells were also a welcome relief in terms of recoil. Yes, the M2 Tactical is a semi-automatic and comes equipped with the ComforTech stock, but it still is a 12 gauge, and anyone telling you any different should be scrutinized. The recoil wasn’t prohibitive and I certainly got used to it, but it’s not a good idea to start using a shotgun after a day of firing an AR or AK because of the significant increase in recoil.

While the pump action has been the standard for law enforcement and personal defense for decades, time behind the Benelli M2 Tactical will convince anyone that it is worthy of consideration as a powerful, reliable alternative.

For more information on the Benelli M2, visit benelliusa.com. 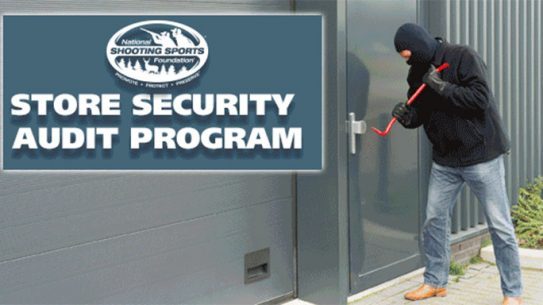 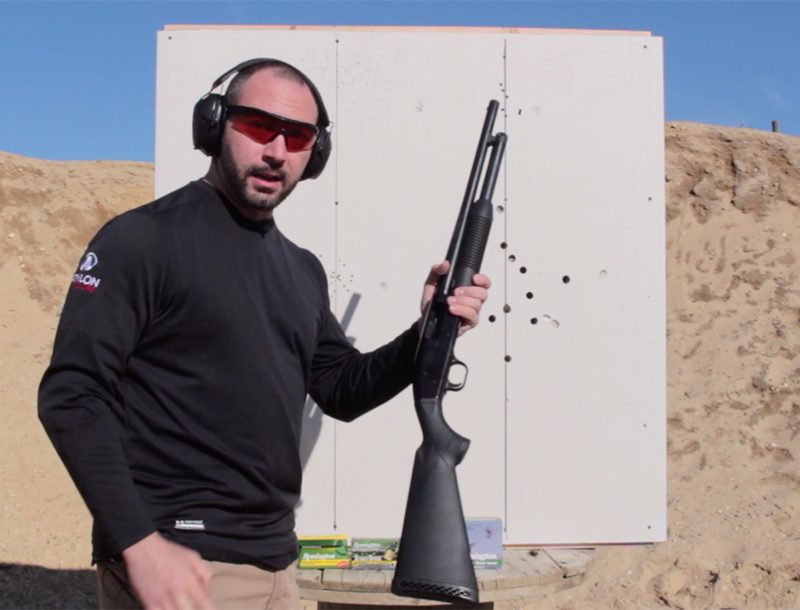