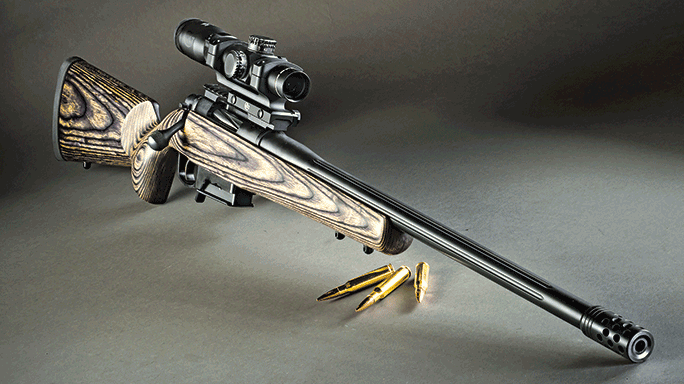 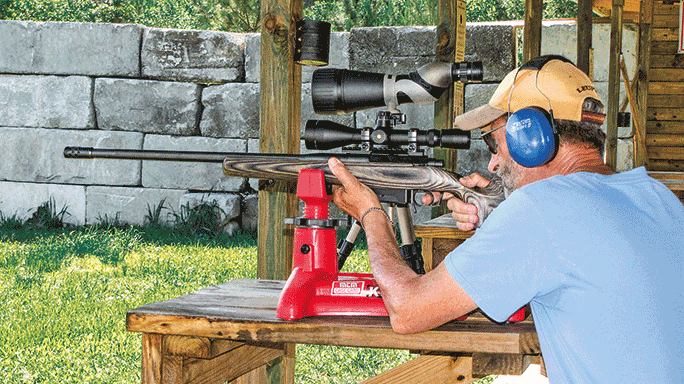 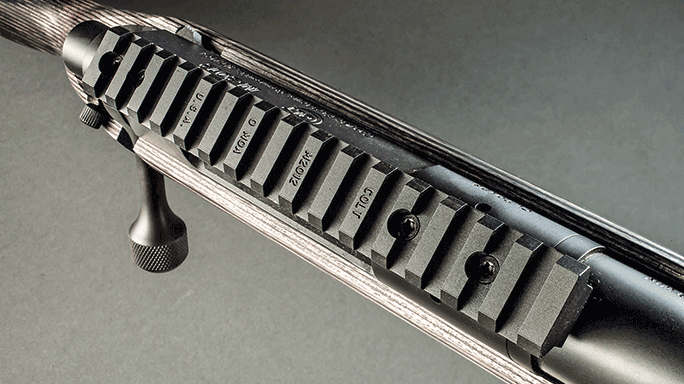 3 of 8
Gun Test: Colt’s M2012 LT308G Rifle in 7.62mm NATO
A 6.25-inch-long Picatinny rail is included on top of the action to accommodate almost any tactical scope, including long-range models with 50mm objectives. 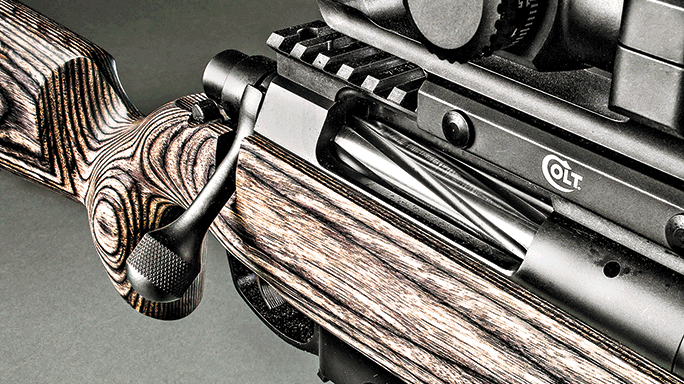 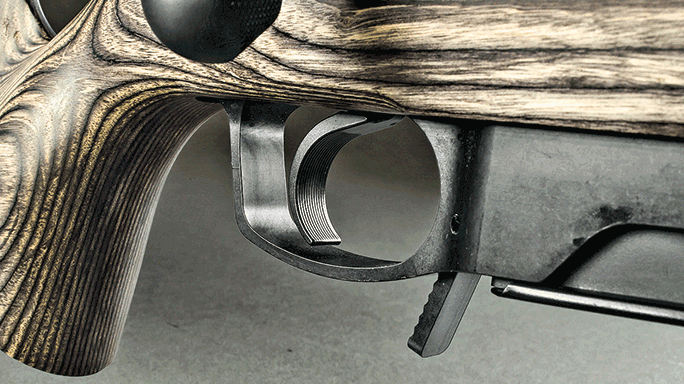 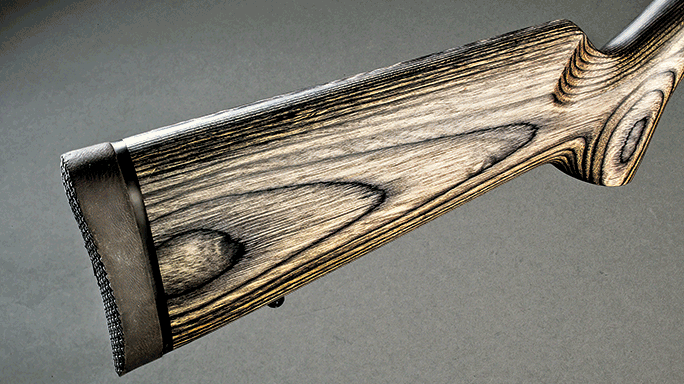 6 of 8
Gun Test: Colt’s M2012 LT308G Rifle in 7.62mm NATO
The laminate stock was expertly fitted, with no gaps between the butt and recoil pad or between the stock and the action. 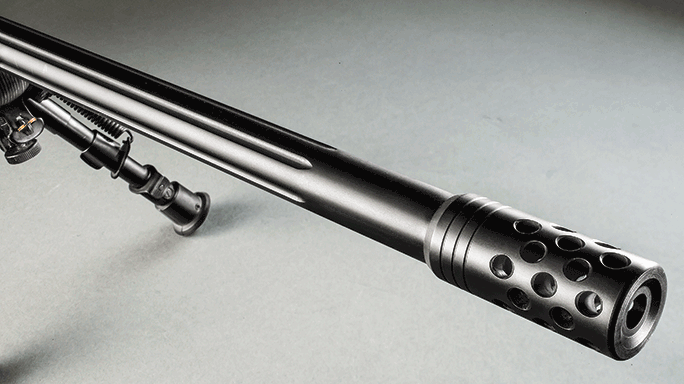 7 of 8
Gun Test: Colt’s M2012 LT308G Rifle in 7.62mm NATO
The 22-inch, fluted barrel is threaded for suppressor use and comes with a recoil-reducing Cooper Firearms muzzle brake installed. 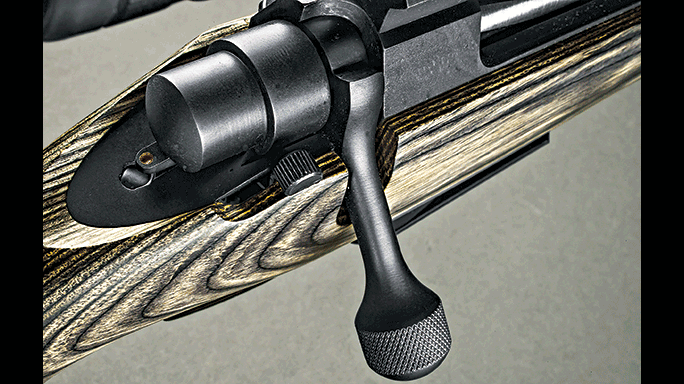 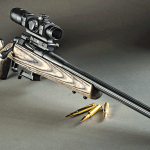 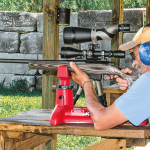 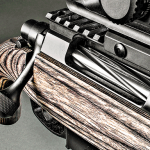 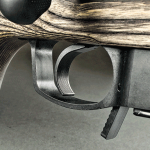 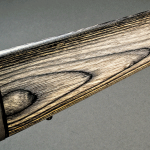 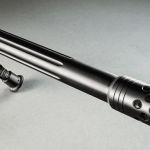 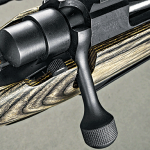 Colt’s M2012 bolt-action rifle in 7.62mm NATO/.308 Winchester is the company’s entry in a growing military and law enforcement market for precision rifles. As the world gets more crowded, the importance of minimizing collateral damage has increased the need for designated marksmen who can stop violence by criminals and terrorists who use innocent bystanders for cover.

The M2012’s action, barrel and muzzle brake are built by Cooper Firearms of Stevensville, Montana. The Colt rifle is based on the Cooper Model 54, and there are four versions of the M2012, all of which have a number of features in common. Each version has a one-piece, 6.25-inch Picatinny rail mounted over the ejection port. The rail provides ample clearance for tactical scopes with 50mm objective lenses. All four versions are also equipped with a removable, five-round box magazine (10-round mags are also available); a long, paddle-style magazine release lever; a large, checkered tactical bolt handle; a single-stage Timney trigger; and a 22-inch, fluted barrel with a custom Cooper muzzle brake. All of the barrels, regardless of caliber, feature six-groove button rifling, and the overall length of each rifle is 44 inches. Finally, each rifle has three sling swivel attachments, the most forward of which can be used to mount a bipod.

The version I tested for this article is the M2012LT308G. It is the lightest version of the M2012 chambered for the 7.62mm NATO. At 8.5 pounds, it isn’t a mountain rifle, but it’s not that heavy, either. When completely equipped with a Leupold 4.5-14x50mm Mark 4 ER/T scope, a sling, five rounds of ammunition and a Harris bipod, the gun’s weight comes to about 11 pounds. The muzzle brake can be removed to install a suppressor. This brings the weight up to around 12 pounds. Even so, a fully equipped LT308G is reasonably portable compared to many tactical rifles chambered for more powerful cartridges.

The LT308G’s match-grade, chrome-moly, fluted barrel has a medium-heavy contour that measures 0.795 inches at the base of the muzzle brake. This barrel is more slender than the heavyweight barrels of other M2012s chambered in 7.62mm NATO, but the LT308G’s barrel is still relatively thick and sturdy compared to most big-game hunting barrels in this caliber. The barrel’s 1-in-10-inch twist rate is fast enough to stabilize 200-grain bullets, which are the heaviest bullets normally loaded into the 7.62x51mm case.

The stock of the LT308G is made of laminated hardwood. Laminated-wood stocks are much stronger than stocks made from a single piece of timber. In addition, they are well known for their ability to resist warping due to changes in humidity and temperature. The stock has an attractive dark gray color and satin finish, which give it a subdued look. This makes it blend well into a variety of urban settings. The stock has a straight comb and sits comfortably on the shoulder, providing a good cheekweld when using a scope. The pistol grip has a right-side palm swell that comfortably fits the hand of a right-handed shooter.

After I picked up my sample M2012LT308G, I examined it at my workbench. The quality checks indicated that the LT308G had no visible signs of poor workmanship. All metal work was cleanly formed and polished. All of the parts fit together well. A dedicated marksman’s rifle needs a light, crisp trigger. The M2012’s single-stage Timney trigger broke crisply at 3.8 pounds, which seemed to me to be a bit heavy for this rifle’s intended purpose. The break was very clean, with no overtravel or grittiness. The trigger shoe has a flat front and is lightly grooved. There is ample room in the triggerguard for a heavy glove. The rifle has a three-lug bolt that requires only a 60-degree lift to open. This provides ample clearance for a variety of large tactical scopes. The striker cocks when the M2012’s bolt is opened, and the rifle required notable effort to cock the striker as the bolt was opened.

Later, at the range, I found that chambering rounds also required notable effort. The extractor was fairly tight, and feeding a round from the magazine required pushing the bolt smartly forward and firmly rotating it into the downward position to ensure that the extractor snapped over the cartridge rim. Ejection is provided by a button-type ejector, and spent cartridges were thrown well clear of the gun.

A designated marksman’s rifle requires a scope that will allow it to deliver maximum accuracy. I chose a Leupold 4.5-14x50mm Mark 4 ER/T M1 scope with a front-focal-plane Tactical Milling Reticle (TMR). This scope has a 30mm tube and a 50mm objective lens for maximum light transmission. It has a side focus knob for eliminating parallax as well as Leupold’s Xtended Twilight lens system, which matches the optical glass and coatings to provide extended transmission of light in the blue-violet spectrum. This is critical to seeing the target in low light. The lenses also have Leupold’s highly regarded DiamondCoat 2 anti-abrasion coating to prevent scratches, and they have blackened edges that help reduce glare. In addition, the windage and elevation adjustments have twin bias springs to ensure the settings stay where they are set and return to their original settings when the turrets are moved to compensate for wind or elevation.

The scope’s reticle is set in the first focal plane, therefore precise estimation of distance and holdover can be made at all power settings. That’s because the size of a first-focal-plane reticle grows with the image as the power setting is increased. Most scopes sold in the United States have second-focal-plane reticles that only allow range estimation at one setting, which is usually the maximum magnification. The first-focal-plane reticle of this scope eliminates a time-consuming step of increasing magnification to the maximum setting before estimating range, and it thereby increases the tactical utility of the riflescope.

I fired the LT308G at the Flagler Gun and Archery Club to test its accuracy and velocity measurements. The rifle came with a target that had a 0.14-inch, three-shot, 100-yard group fired at the factory. This very small group was produced with a handload that contained a Sierra 168-grain MatchKing bullet and IMR 4064 powder. It’s obvious that with the right load, this rifle can definitely perform.

Environmental conditions were very good, with minimal wind and bright sun during the tests. I used an MTM K-Zone shooting rest to steady the rifle as well a Leupold Kenai spotting scope. Three Black Hills ammunition loads were used. Group averages with the ammo ranged between 1.12 and 1.48 inches. The smallest single group, produced with Black Hills’ 175-grain SMK load, measured 0.95 inches. The largest single group, fired with Black Hills 168-grain Gold Match A-MAX ammo, was 2.09 inches. This level of accuracy is acceptable for a designated marksman rifle at distances out to 100 yards, but may not be what one would normally expect from a custom-made rifle. The M2012 is capable of good accuracy, but one must take the time to match the load to the gun. And, with a precision rifle like this one, a motivated shooter will likely devote the time and effort into this to achieve it.

Velocities were well within the normal range for the 7.62mm NATO. The fastest load was the Black Hills Gold ammo with the 155-grain Hornady A-MAX bullet. It generated a velocity of 2,722 fps and 2,550 foot-pounds of energy. The chronograph screen was placed 25 yards from the muzzle. The turbulence from the Cooper muzzle brake interfered with the readings when I placed the PACT 1XP chronograph 15 yards from the muzzle of the rifle.

For those looking for a lightweight bolt action that delivers .308/7.62mm power with extremely good accuracy, the Colt M2012LT308G warrants a very close look. 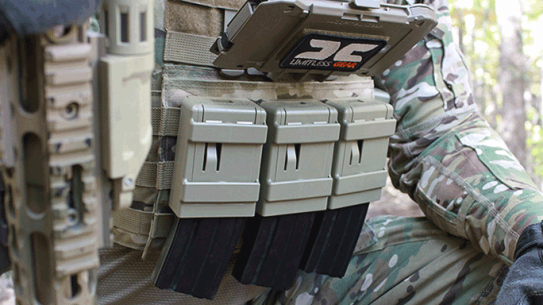