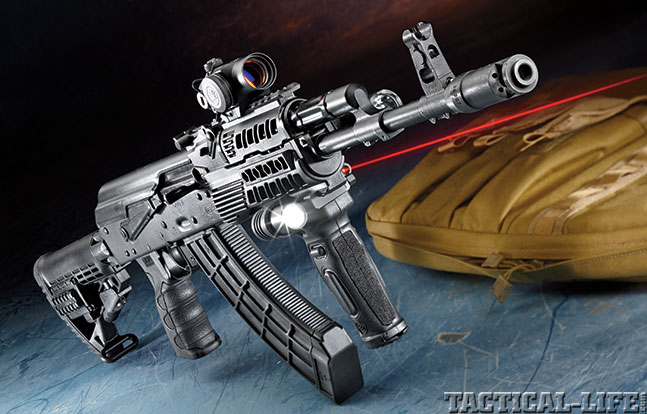 1 of 8
Gun Review: Concern Kalashnikov Saiga IZ132SM 7.62x39mm
The new IZ132SM has plenty of tactical upgrades and is ready for duty right out of the box. Shown with a Vortex SPARC and Crimson Trace MVF-515. 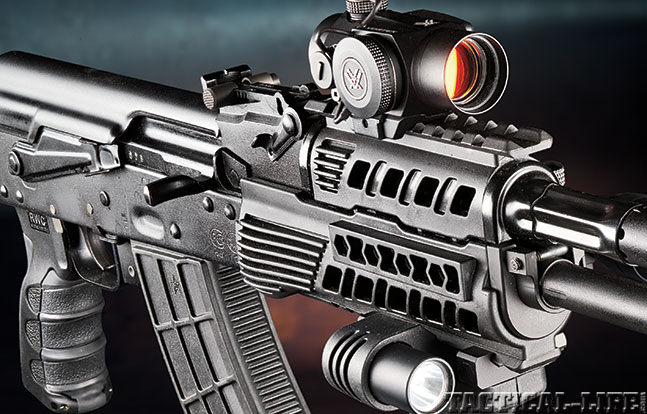 2 of 8
Gun Review: Concern Kalashnikov Saiga IZ132SM 7.62x39mm
The polymer handguard from Command Arms Accessories comes with top and bottom rails as well as removable side rails for mounting lights, lasers and other tactical necessities. 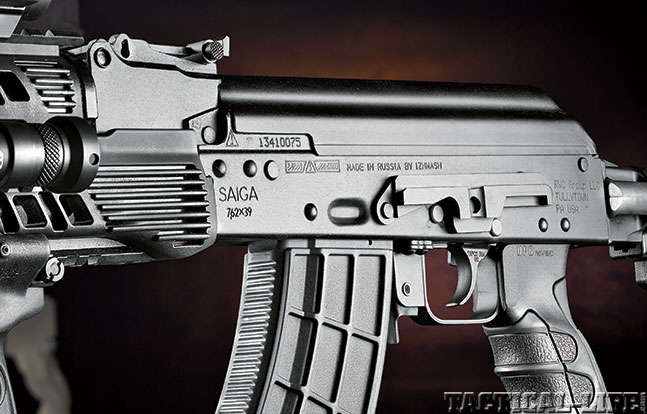 3 of 8
Gun Review: Concern Kalashnikov Saiga IZ132SM 7.62x39mm
The left side of the receiver is fitted with an AK mount for adding top rails or scopes. The triggerguard is large enough to accommodate gloves, and the magazine release is easy to reach. 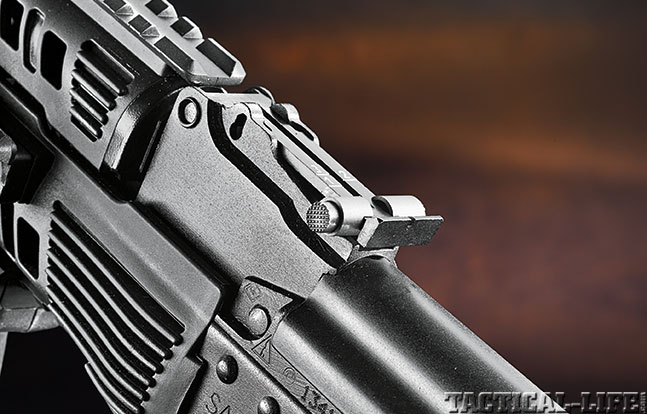 4 of 8
Gun Review: Concern Kalashnikov Saiga IZ132SM 7.62x39mm
Behind the top Picatinny rail is a ladder-type rear sight that is fast on target and features elevation adjustments out to 300 yards, the practical range of the 7.62x39mm cartridge. 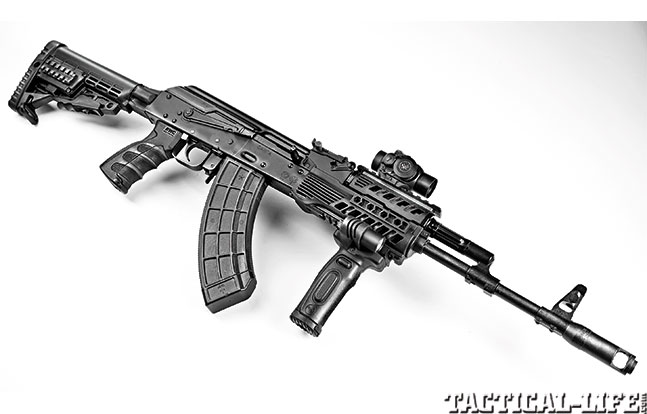 5 of 8
Gun Review: Concern Kalashnikov Saiga IZ132SM 7.62x39mm
This new Saiga has all of the upgrades an operator could want in one affordable package. With a light and red-dot sight, it’s ready for low-light, close-quarters duty. 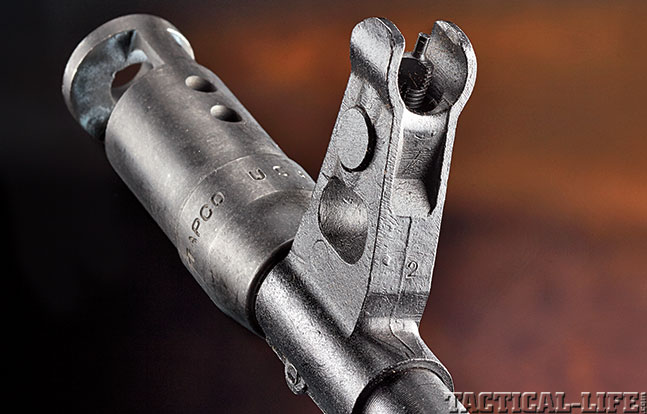 6 of 8
Gun Review: Concern Kalashnikov Saiga IZ132SM 7.62x39mm
The barrel comes capped with a TAPCO AK-74-style flash suppressor/muzzle brake for faster follow-up shots, and the front sight is a standard AKM unit that, on the test model, came properly centered. 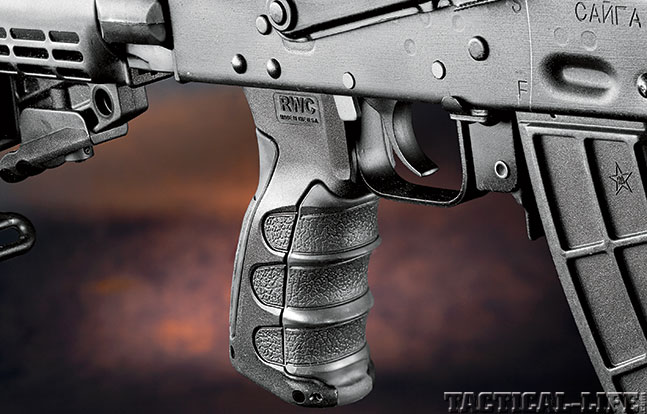 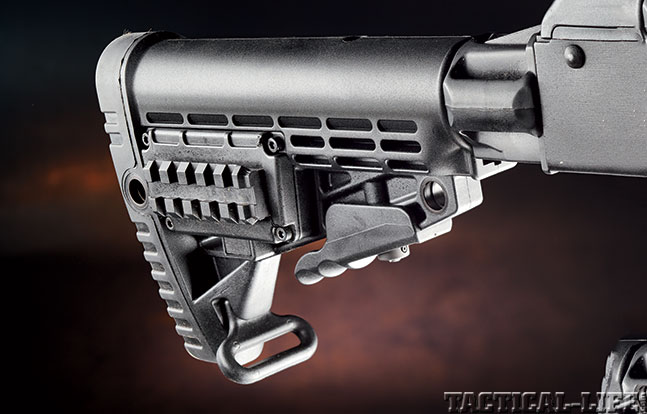 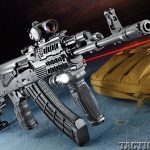 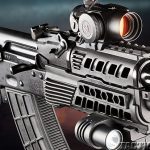 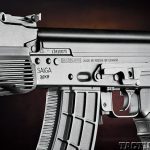 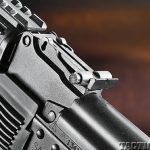 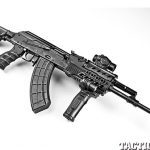 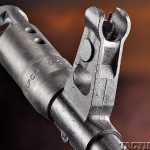 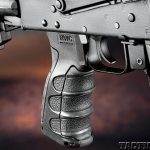 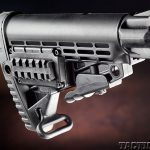 Many avid AK shooters believe that the Russian-made AK is the pinnacle of the design. Why, you may ask? Russia is the birthplace of this weapon and its long and storied history. Rifles that are built there generally have higher-quality parts, are made with greater attention to detail and are more consistently accurate. Their chrome-lined barrels tend to be straighter and, overall, the weapons have tighter fits and better finishes. Even when AK-47 rifles from other countries were completely assembled prior to being imported, they could vary widely in fit, finish and quality. Once import restrictions required that these AKs had to be assembled from kits or modified after importation, things got sketchier in some cases. The sights may not be straight, gas ports can be either misaligned or of the wrong size, and the finish can look like your six-year-old painted it. Custom AK-47 rifles fix many of those issues, but often at considerable cost. Russian rifles still bring a premium, and choices are few, but Concern Kalashnikov and the RWC Group are now offering a really nice Russian rifle ready for tactical work right out of the box.

The story behind Concern Kalashnikov is an interesting one, and one that goes back more than two centuries. Tsar Alexander founded the Izhmash plant in 1807, and it remains one of the longest-standing weapons manufacturers in the world. The company produces a number of military arms, including Kalashnikov rifles like the AK-47, vehicles and other products. Mikhail Kalashnikov himself worked at Izhmash, and it’s essentially the birthplace of the weapon platform—one of the most prolific in the world. The Izhevsk Mechanical Plant was founded in 1942 to build small arms for World War II, and it went on to provide civilian weapons, including Baikal shotguns. It was also widely known for developing and manufacturing Makarov and Yarygin pistols. Last summer, these two manufacturers were merged into one company, Concern Kalashnikov.

The RWC Group is the exclusive U.S. importer of Concern Kalashnikov weapons, including sporting rifles and shotguns. I recently got the chance to test a new Saiga rifle from the RWC Group with several upgrades—the IZ132SM in 7.62x39mm.

Saiga rifles are favorites among many AK-platform enthusiasts, as they are some of the highest-quality weapons you can get in this style, and they are true Russian rifles built in the same factory as the Russian military equivalents. Import restrictions meant that they entered the United States as “sporting rifles,” requiring quite a bit of modification to return them to their original configurations. After arriving in America, many end-users repositioned the trigger mechanisms, changed the stocks and made other alterations (while ensuring 922r compliance) to reconfigure the semi-automatic Saigas to look more like their military brethren. Now, the RWC Group and Concern Kalashnikov have done all of the work for you and are offering an upgraded rifle that falls within those parameters.

The IZ132SM rifle features a Saiga receiver using a standard rear trunnion that accepts typical AK-style buttstocks. A polymer, six-position-collapsible buttstock and tube from Command Arms Accessories (CAA) is installed. The buttstock features battery storage compartments, a short side rail and several sling attachment points, including quick-detach (QD) sling cups at the front and rear. The stock tube itself features sling attachment slots on both sides at the front.

To accommodate the CAA UPG47 pistol grip, the triggerguard has been moved forward slightly, and it houses a TAPCO AK G2 single-hook trigger. The UPG47 pistol grip comes with six interchangeable front- and backstraps, allowing operators to find the perfect fit for them. Just behind the trigger, on the right side, is the Saiga bolt-hold-open lever. The safety is standard AKM. The left side of the receiver is fitted with an AK mount for adding top rails or scopes.

Another enhancement is the polymer CAA handguard, which comes with four rails. The side rails can be removed if needed, and the top rail allows for the use of micro red-dot sights. The front sight is a standard AKM unit, and the ladder-type rear sight has a rear notch and markings out to 300 meters. The 16.3-inch barrel is capped with a TAPCO AK-74-style flash suppressor/muzzle brake. Shipped in a fitted cardboard box, my test IZ132SM came with one 30-round U.S. Palm magazine.

This particular rifle was an early production rifle, and it had the U.S Palm magazine fitted to the standard Saiga magazine release. I checked with the RWC Group, and future rifles will be equipped to accept standard “mil-spec” magazines. The company is using six different types (metal, polymer, etc.) for proper fitting, so most AK magazines should work with your rifle. For the purposes of testing the rifle, I fitted one of my spare U.S. Palm magazines to the rifle.

At the range, the first thing I checked was the sight and barrel alignment, and it was straight. Not always the case, it’s annoying to have the tower off center and the sight moved completely to one side. With the front sight in the middle, the rifle held very close to center. The optic I used was also centered, making for a pleasant sight picture. Sure, this isn’t a requirement, but it’s a nice touch, and it makes for much more enjoyable shooting. This is one of the things you can expect from a solid Russian AK-style rifle.

The IZ132SM’s accuracy was pretty solid—about as good as it gets with an AK rifle. All of the military-surplus and mil-spec ammunition clustered into groups tighter than 3 inches at 100 yards. While I’m not a huge fan of using brass-cased ammunition in AK-type rifles, this model had no issues feeding it. DoubleTap’s lead-free, 123-grain TSX ammo produced the best group, which measured just a tad less than 1.5 inches. Part of DoubleTap’s Hunting line, it has proven accurate, and the TSX may be one of the best hunting rounds ever developed. It can be a bit overpenetrative in some self-defense situations, but if you need some barrier penetration with solid accuracy, it remains a fantastic self-defense round. DoubleTap also makes the 123-grain Rifle Defense round in this caliber. Almost as accurate in the IZ132SM, this load uses a bullet designed for expansion.

The rifle’s reliability was excellent. Over several hundred rounds on the range, I experienced no malfunctions. I completed most of the testing using Red Army 123-grain FMJ ammunition. This is proving to be very accurate and consistent practice ammunition. I also used Wolf’s Military Classic ammo along with Hornady’s 123-grain SST rounds. Ejection—even with the brass-cased DoubleTap ammo—was positive, with no failures to extract or eject.

TAPCO’s G2 trigger has become the standard for most AKs, especially those needing to meet the 922r requirements. It is fast, resets positively, and there is no trigger slap. On the range, the IZ132SM was very fast handling, well balanced, and double and triples were quick and accurate. TAPCO’s AK-74-style muzzle brake tamed recoil nicely, which turned out to be pretty soft. Moving the stock all the way forward, the IZ132SM worked well, even when I wore my Survival Armor tactical vest.

I found this rifle to be more than capable as a duty rifle (where allowed) or for any self-defense situation. The CAA handguard did not move during testing. My optic held its zero throughout and remained locked in position on the top rail. There was no movement in the stock, either. Given the IZ132SM’s tactical design, I would like to see an upgraded safety with a finger ledge. Standard safeties are a bit less compatible with typical range operation in the U.S. Being able to operate the safety while remaining in the pocket with the trigger finger is a huge plus. It already has a bolt-hold-open lever, so no notch would be needed for the safety.

EDITOR’S NOTE: At the time of this issue going to press, Concern Kalashnikov’s line of products was restricted from importation into the United States by Executive Order 1366, Ukraine-Related Sanctions. Unless reversed, this action prevents any future importation of the company’s products. 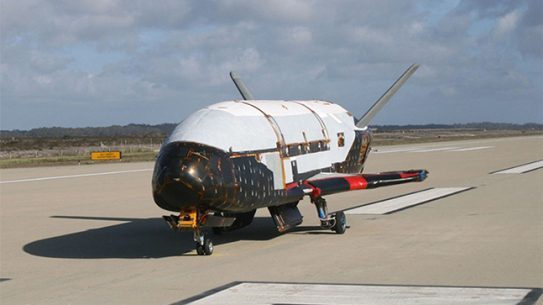 The US Air Force's X-37B space plane, which has been in orbit for nearly...