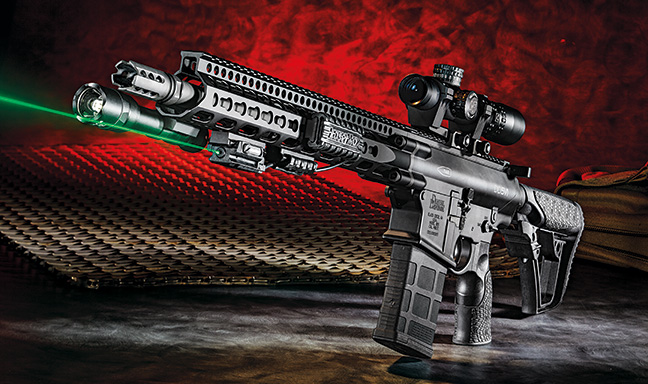 1 of 6
Gun Test: Daniel Defense’s DD5V1 Rifle in 7.62mm NATO
Daniel Defense is known for producing high-end rifles with unshakeable reliability, and the new DD5V1 continues that legacy. Shown with a Nightforce 1-4x24mm NXS, a LaserMax Uni-Max laser, and a SureFire Scout light. 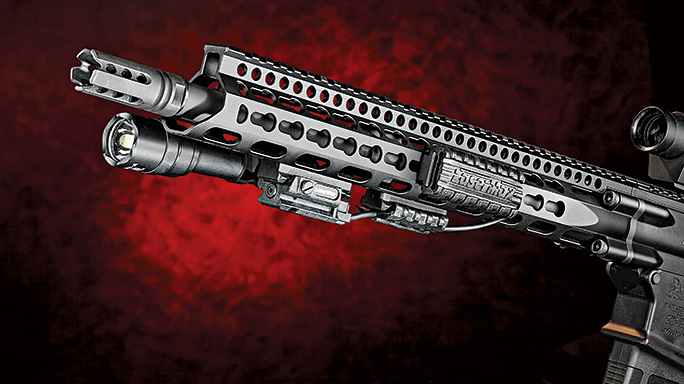 2 of 6
Gun Test: Daniel Defense’s DD5V1 Rifle in 7.62mm NATO
The free-floating handguard features a top rail and KeyMod slots along the sides and bottom. Also note the four-bolt attachment system at its rear. 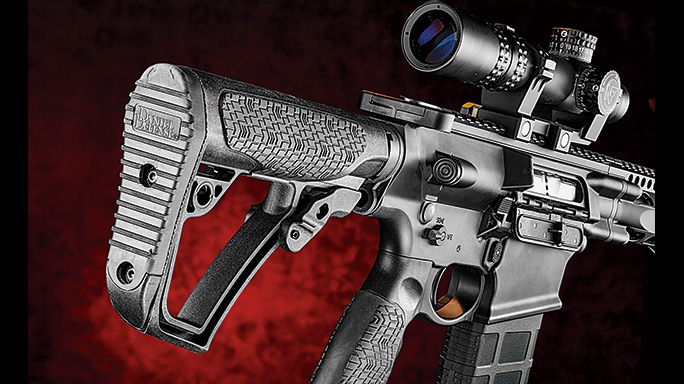 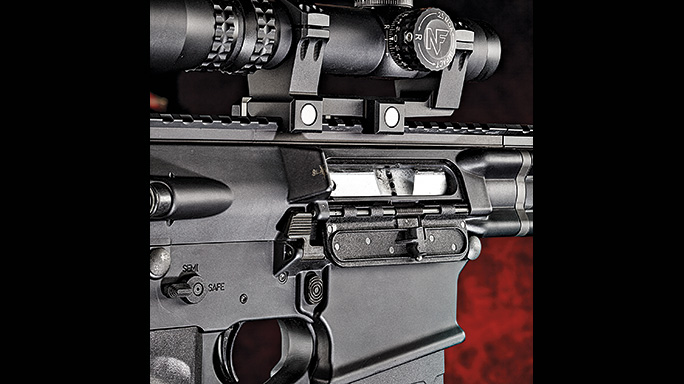 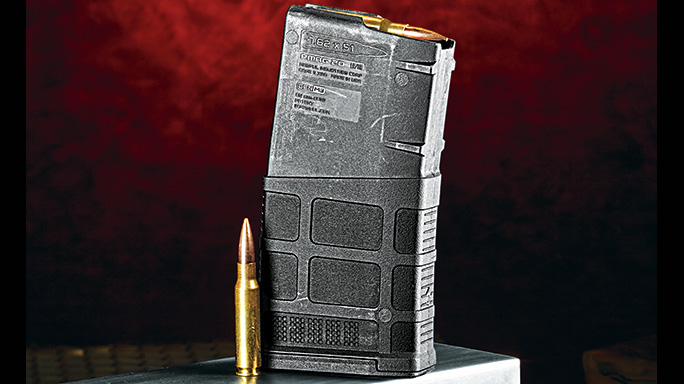 5 of 6
Gun Test: Daniel Defense’s DD5V1 Rifle in 7.62mm NATO
The lower has an enlarged triggerguard, ambidextrous controls, a Geissele trigger and a flared mag well that accepts SR-25-pattern mags like the included Magpul PMAG (pictured). 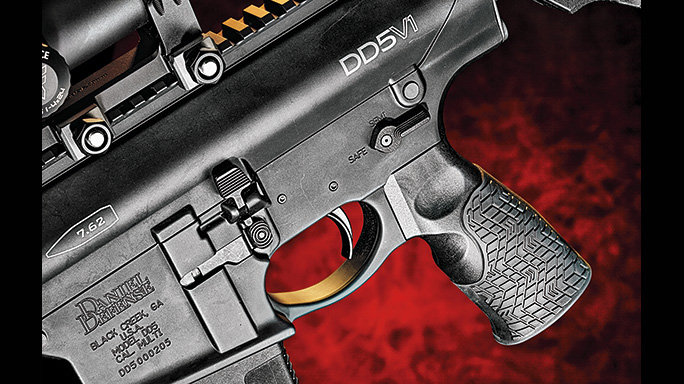 6 of 6
Gun Test: Daniel Defense’s DD5V1 Rifle in 7.62mm NATO
The lower (pictured) has an enlarged triggerguard, ambidextrous controls, a Geissele trigger and a flared mag well that accepts SR-25-pattern mags like the included Magpul PMAG. 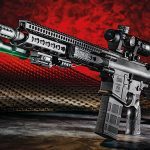 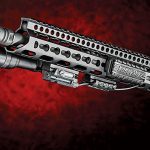 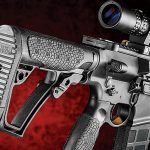 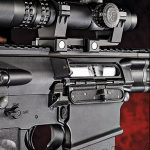 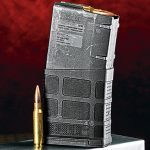 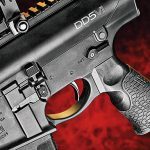 I am often asked what one rifle would be my first choice for all-purpose use—tactical missions, self-defense or hunting. Given the state of the market today, it would probably be an AR. At no time in my life have AR-platform rifles been better built, better tested and more capable. The platform is ergonomic and reliable, with plenty of parts availability.

The remaining questions then become caliber, operating system and barrel length. I’ve never been a fan of the 5.56mm NATO, so I’d probably start by looking at the 6.8 SPC, 6.5 Grendel or even the 6.5 Creedmoor. They all do some things better than the 5.56mm. They are just less prevalent and can be finicky in ARs. Luckily, my pragmatic side would prevail, making the 7.62mm NATO/.308 Winchester my first choice.

Loaded properly, the 7.62mm works as well or better than any cartridge available within practical ranges. Hornady’s 110- and 125-grain TAP loadings have proven no more overpenetrative than the bonded 5.56mm ammo currently in use for CQB operations. The 155-grain TAP exhibits serious all-purpose ballistics out to 500 meters. Step up to 168- and 175-grain ammunition and you can reach the limits of the cartridge. In fact, I have been getting solid hits on 12-inch targets at 800 yards using barrels as short as 12.5 inches.

Every conceivable type of 7.62mm/.308 round, from frangible to bonded hunting loads, is widely available. The 7.62mm holds its own in just about every barrel length out to 700 yards. For me, 16-inch barrels are the most versatile. This past year has seen several excellent rifles released in this category, and one of the best I have used so far is the new Daniel Defense DD5V1.

New Big Bore On The Block

The DD5V1 starts with forged 7075-T6 aluminum upper and lower receivers that are designed for increased strength while remaining lightweight. The upper features a 16-inch, chrome-lined barrel that has been cold-
hammer forged from chrome-moly-vanadium steel. It has Daniel Defense’s strength-to-weight (S2W) profile along with four-groove, 1-in-11-inch twist rifling for optimum accuracy over a broad range of ammunition. The barrel also has a longer extension that works with M4-style feed ramps for enhanced reliability. Finally, the barrel comes capped with Daniel Defense’s Superior Suppression Device (SSD), which helps reduce both muzzle flash and recoil.

Surrounding the barrel and mid-length gas system is a 15-inch, free-floating handguard with a full-length Picatinny top rail and KeyMod slots along the sides and bottom. Daniel Defense designed the DD5V1 so that the barrel and handguard attach to the upper receiver via an innovative four-bolt system that does away with a barrel nut. This increases accuracy without requiring any special tools.

The ambidextrous charging handle is modular—users can equip it with two different-sized latches—and it operates an improved bolt carrier group with enhanced extractor geometry, dual ejectors, an oversized cam pin and a proprietary low-friction coating.

The DD5V1’s forged lower receiver includes a flared magazine well, an integral, enlarged triggerguard and ambidextrous controls. The magazine release, safety and bolt release are easy to access from either side. A Geissele two-stage SSA trigger is installed, providing a crisp, clean, 4.5-pound break, which is perfect for duty applications. The trigger’s 2-pound second stage provides for precision when necessary and speed when required.

The Daniel Defense pistol grip shares the grip angle of a 1911 pistol while offering Soft Touch overmolding for extra comfort and control. It pairs nicely with Daniel Defense’s collapsible buttstock, which locks solidly in place, comes with two interchangeable buttpads and features the same Soft Touch overmolding. All together, the complete DD5V1 package comes in a hard case with a 20-round PMAG.

Removing my test rifle from its case, the first thing I noticed was how little it weighs. At 8.3 pounds unloaded, the DD5V1 weighs less than some of my piston-driven 5.56mm rifles. My fist thought was that it was just about perfect for a patrol or do-it-all AR. The handguard is narrow and flat at the bottom, allowing for a firm grip and solid use on barricades or other obstacles. I added a set of Daniel Defense fixed sights along with Trijicon’s new Miniature Rifle Optic (MRO) in a high mount. I also installed A BCM KeyMod QD sling mount along with a ZeroBravo KeyMod Reversible Hand Stop (RHS). There are flush cups on either side of the stock and the back of the receiver, facilitating both single- and two-point slings.

For group testing and some long-
distance shooting, I used a U.S. Optics 1-8X SR-8C scope with a Horus H50 reticle. It allows for holds out to 500 yards, simple ranging and proven accuracy. If you turn the scope down to 1X and turn on the illuminated reticle, it works for CQB operations. Finally, I added a SureFire Scout light in an offset mount using a short piece of KeyMod rail. Groups were fired from an improvised rest from a bench.

With the MRO, flashlight and fixed sights, the DD5V1 balanced nicely. Working on the square range, it was very quick to target. Placing the RHS on the handguard helped reduce perceived recoil. Lightweight 7.62mms tend to have a bit more recoil, and this rifle was no exception. No, it’s nothing problematic, but you will immediately know this is not a 5.56mm. Starting at 25 yards and moving in, the rifle’s accuracy was excellent. Over a couple hundred rounds from stationary, moving and angular shooting positions, none of my shots exited the 10-inch, center-mass circle of the target.

The DD5V1 was very handy around barricades, obstacles and my FJ Cruiser. The handguard rested nicely on my Mystery Ranch pack for some field-expedient shooting. It was easy to maneuver around, off of and then back to cover. Some 7.62mm ARs can be barrel heavy, making one-handed operation difficult in confined spaces, but this rifle had no such issues.

Daniel Defense’s SSD muzzle device is moderately loud, suppresses flash well and directs the blast away from the shooter. It worked well in my range’s shoothouse, and this is a good compromise if you’re looking for a muzzle brake/flash suppressor.

At longer distances, the DD5V1 was extremely accurate, with groups at or under an inch, and the best five-shot group (using Desert Tech’s 175-grain match ammo) measured 0.67 inches. With its 1-in-11-inch twist rate, the rifle was consistent over a broad range of bullet weights from 155 to 175 grains. Although it wasn’t the most accurate load during testing, the Hornady 155-grain TAP would be just about perfect for deployments—it’s soft-shooting and consistent. Out to 300 yards, this load produced a 1.75-inch group, only a bit larger than the Desert Tech ammo. The A-MAX is a proven performer with consistent expansion and penetration, making it well suited to duty or self- defense applications.

Using the U.S. Optics scope, I tested the DD5V1 on various steel targets from 50 to 500 yards. Loaded with any of the 168- or 175-grain match ammo, it was possible to get consistent hits on steel even with quite a bit of wind. Given a bipod and time to settle in, this rifle would be as accurate as the AR platform gets short of dedicated precision applications. Firing from a bag, unsupported prone and less conventional positions, the DD5V1 was excellent. It fit into my “one rifle” requirements perfectly.

I did not experience any malfunctions over a pretty broad spectrum of ammunition. Loading 20 rounds comprised of 10 different loads, the rifle never missed a beat. The ejection was also very consistent; the DD5V1 ejected every empty case with authority at about 3 o’clock. During rapid-fire strings, the pattern changed little, indicating that the spring and buffer weight were well tuned. No matter how fast the trigger was pulled, the DD5V1 just kept on ejecting brass in pretty much the same spot.

You’re always going to feel the recoil of 7.62mm ARs. That’s physics. Piston- driven rifles tend to shoot softer but add a bit of weight. Given this rifle’s slim rail, light weight and excellent balance, it is a fair trade for me. In my experience, direct-impingement rifles in this chambering tend to be more consistently accurate with more types of ammo, and the DD5V1 was no exception.

Daniel Defense did an excellent job with this rifle, especially when you consider that it’s the company’s first 7.62mm/.308. It sets a high bar in terms of accuracy, reliability and balance. Daniel Defense produces some of the most trusted rifles for professional use, and this new 7.62mm lives up to that reputation easily. If you’re in the market for this type of rifle, make sure you check out the DD5V1. 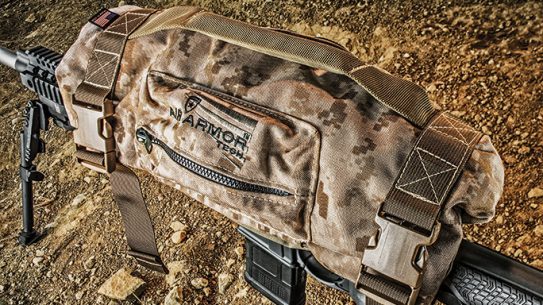 The Inflatable Scope Cover from Air Armor Tech consists of a 1000 Denier ballistic...