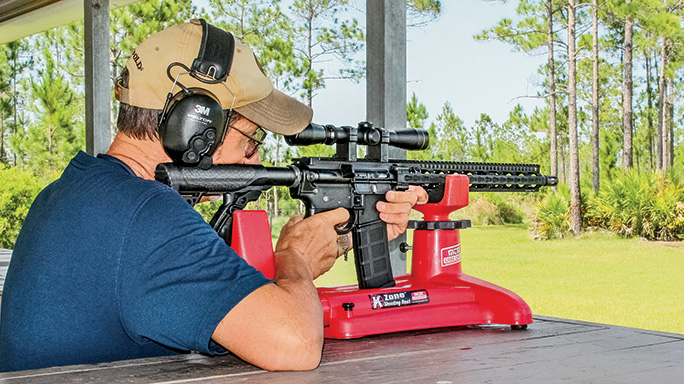 1 of 4
Multi-Mission Test: Daniel Defense’s DDM4V11LW Rifle
The DDM4V11LW acquitted itself well during testing at the range. Shooting from a rest with a Leupold VX-2 scope mounted, the author was able to get solid hits out to 300 yards. 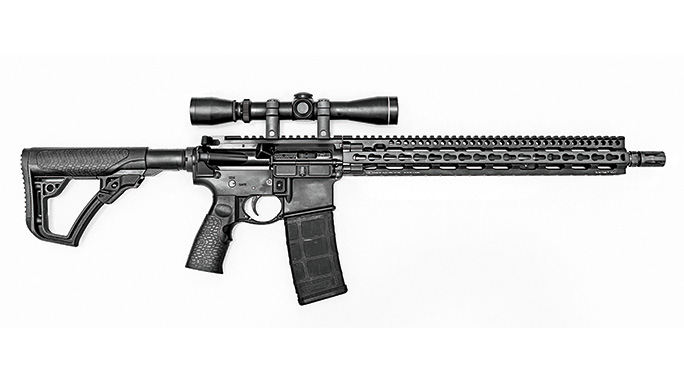 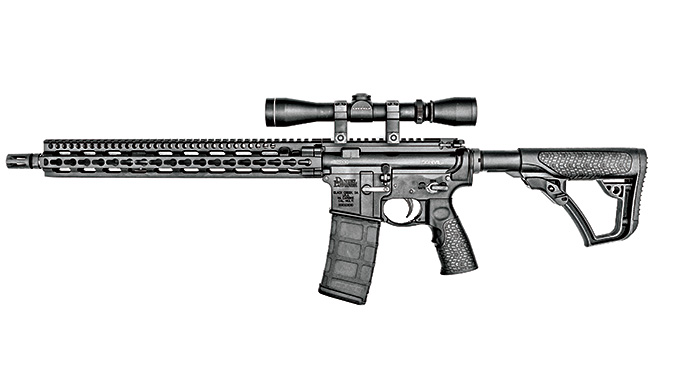 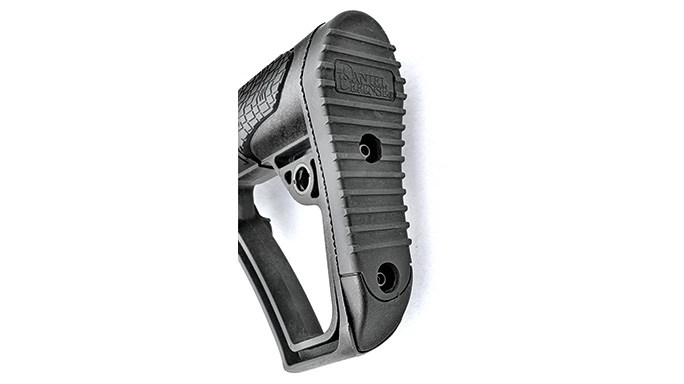 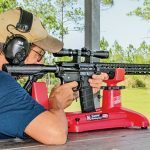 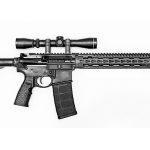 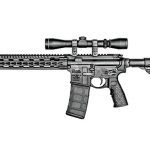 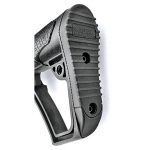 The DDM4V11LW from Daniel Defense is an accurate and very reliable carbine that embodies Eugene Stoner’s original concept for the AR-15. Stoner’s idea was to produce a lightweight, small-caliber rifle with excellent firepower that was a lot easier to carry all day than an M14. Even though Stoner originally designed the AR for military purposes, carbine versions like the DDM4V11LW are a natural choice for hunters, competition shooters and civilians who use rifles for personal defense.

The DDM4V11LW’s design reduces weight without compromising the ruggedness and durability that’s so important in tactical rifles. The upper and lower receivers are milled from mil-spec 7075-T6 aluminum alloy that is then Type 3 hardcoat anodized for scratch and corrosion resistance.

The lightweight, 16-inch barrel is made of chrome-moly-vanadium steel that is hammer forged. It has a 1-in-7-inch twist rate, which allows the rifle to easily stabilize 77-grain bullets. The barrel also has a mil-spec heavy phosphate coating for weather resistance. At the end of the barrel is a Daniel Defense flash suppressor made of 17-4 PH stainless steel that is nitride coated to resist corrosion. The rifle’s mid-length gas system is equipped with a pinned low-profile gas block made of hardened steel that has the same durable phosphate coating as the barrel.

To ensure that the DDM4V11LW’s internal operating system is as rugged as the barrel and receivers, Daniel Defense has chromed lined the bolt carrier group for corrosion resistance and smooth operation. In addition, the bolt carrier key screws are firmly staked in place to prevent any looseness that could cause the key to shift and tie up the action.

The handguard, stock and rear receiver extension are just as durable as the DDM4V11LW’s main components, and they provide maximum flexibility for conforming the rifle to the individual needs of its user. The lightweight handguard is the 15-inch version of Daniel Defense’s SLiM rail. Made of Type 3 hardcoat anodized, CNC-machined 6061-T6 aluminum, it extends nearly to the muzzle and has KeyMod attachment points that offer superior resistance to recoil and allow for a precise return to zero when accessories such as lasers are re-mounted after they have been removed. The length of the rail makes it easy to mount a large variety of accessories and also allows the shooter to extend their support hand closer to the muzzle and increase the precision with which the gun can be transitioned between targets.

The Daniel Defense stock and pistol grip are made of polymer with Soft Touch overmolding. The overmolding offers a comfortable and secure cheekweld and hand grip. In addition, the rugged 7075-T6 aluminum rear receiver extension has six positions to precisely adjust the length of pull. The lower receiver also has an enhanced magazine well for quick reloads. Put all of this together and the result is a reliable multi-mission rifle that gives its user great flexibility to adapt it
to his or her needs.

A good design is important, but so is quality of manufacture. When it arrived at the Florida Gun Exchange, I checked the DDM4V11LW for overall quality of construction, including fit, finish and function. It looked very good. At home, I field-stripped the rifle at my workbench and thoroughly checked it inside and out. There were no scratches, tool marks, sharp edges or poorly conformed lines anywhere on the gun. The fit was excellent. There was no play between the upper and lower receivers or between the upper receiver and the handguard or the rear receiver extension. The muzzle brake was square with the barrel. As for its finish, the entire gun was matte black and there was no mismatch in color even though three different finishes were applied to various parts.

In addition, all of the controls operated positively. The magazine latched firmly in place and was ejected smartly when the release was pushed. The safety was solid and smooth in operation, and the stock adjusted cleanly and locked solidly in place. The bolt handle unlocked and locked positively, and the carrier group moved smoothly in and out of battery when the operating handle was cycled.

The DDM411LW’s trigger measured 7.5 pounds on average, and it functioned positively. This might be a bit on the heavy side for precise shots, but the DDM4V11LW is primarily designed to be a tactical rifle, so one shouldn’t expect a target trigger.

The DDM4V11LW does not come with sights, so I mounted a Leupold 2-7x33mm VX-2 scope with a duplex crosshair. Set at 2X, this scope has a wide enough field of view to be useful in close quarters. At 7X, it allows you to easily engage targets out to 300 meters. This scope does not have a lighted reticle, so I mounted a Crimson Trace Rail Master Pro light/laser on the top rail. I mounted the scope in extra-high Leupold rings so my view would not be blocked by the laser/light. The result was a clear picture of the target at night with the crosshairs brightly backlit. In addition, the laser’s red dot could be clearly seen in the scope in low light, making the scope function much like a red-dot sight.

I zeroed the laser for 20 yards by centering its dot on the crosshairs at that distance. Since the laser and crosshair are not coaxial, one must practice compensating for holdover and windage when using the dot just as one would do if the gun had a laser and no scope.

To test the carbine’s accuracy, I fired three 5-shot groups at 100 yards with all of the loads. The Winchester 5.56mm NATO load produced a 3.27-inch, three-group average and the other four loads shot three-group averages between 1.63 and 1.99 inches. The best single group, produced with CorBon’s 77-grain ammo, measured 1.04 inches. The CorBon load also had the best 100-yard, three-group average. Long-range accuracy testing involved firing two 5-shot groups at 200 yards and two similar groups at 300 meters. At 200 yards, I engaged silhouettes with the 77-grain Black Hills load and the groups measured 2.79 and 2.89 inches. At 300 meters, two groups using the Black Hills 69-grain load measured 4.44 and 5.01 inches. Given that testing days had light to moderate crosswinds, this is very good performance.

The true test of a defensive firearm is how it performs in tactical drills and simulations. Therefore, I used the rifle to shoot two tactical drills and a home-invasion scenario. The tactical drills involved using setting the scope at 2X and shooting at multiple targets. The targets in the drills were at 7 and 15 yards. I used the Crimson Trace Rail Master Pro light/laser to engage multiple targets in the home-invasion scenario. I also used a Competition Electronics shot timer to record times for each string of fire. Each tactical drill was run twice and involved firing five shots at two targets that depicted three assailants. I shot the targets in this sequence: Assailant 1 got a double tap to the chest, Assailant 2 got a single headshot and Assailant 3 got one shot to the chest and one to the head. My average time for the two strings in the 7-yard drill was 10.4 seconds and the accuracy score was 70/100. The average time for two strings in the 15-yard drill was 9.25 seconds with an 80/100 score.

The scenario simulated a home invasion at night in which the homeowner comes out of the bedroom to confront several assailants trying to break into a child’s room. At the buzzer, the shooter opens the bedroom door and engages the three assailants in a hallway. Targets were set at 6 and 9 yards. The average run time for the scenario was 10.1 seconds and the score was 80/100.

The DDM4V11LW is a lightweight, well-built, accurate and very reliable rifle. Its trigger was a bit heavy, but that did not interfere with shooting good groups with match ammunition. Its $1,599 MSRP is reasonable given its high level of quality, and it would be an excellent choice for personal defense, competition or hunting. 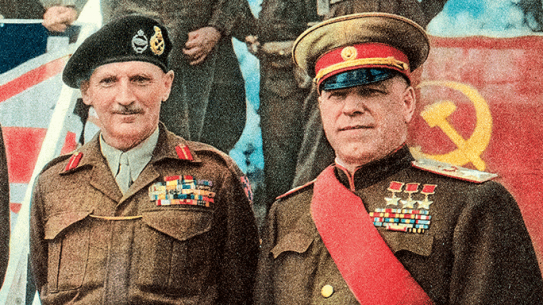 Meet some military leaders who were allied forced during World War II.